The Wire Troll: Tabata’s Up 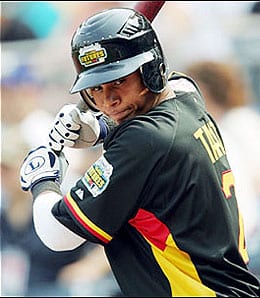 Jose Tabata has taken over as the lead-off man in Steel City.

As inter-league play rumbles on throughout the land, is there anything truly more inspiring than getting the opportunity to watch the Astros facing off against the Yankees? We could also spin the dial and watch the Blue Jays playing against their arch rival and nemesis the Colorado Rockies. It simply doesn’t get much better than that, does it? If it wasn’t for phenom Stephen Strasburg pitching Sunday in Cleveland there might be less than 10,000 diehards at the mistake by the lake, or whatever it’s currently being called. Division titles could ultimately be decided out of this mess and it’s high time that the powers that be in MLB give up the ghost and move on from this failed experiment.

I sense a rant, and a rather large one looming, so without further ado, let’s get to the topic at hand – this week’s waiver wire picks.

Jose Tabata, OF, Pittsburgh Pirates: Lost somewhat in the euphoria accompanying the debuts of Strasburg and Mike Stanton this past week, the Pirates made a move and called up 21-year-old speedster Tabata. In 224 at-bats at Triple-A Indianapolis, he slugged three homers, drove in 19 runs, stole 25 bases, and managed to compile a stellar .308 BA. This move allows Andrew McCutchen to move into the three hole, a prospect I find most intriguing. If you feel the need for speed, make a move and get Tabata rostered in all formats for the upcoming week.

Daniel Nava, OF, Boston Red Sox: Who is Nava, you ask? He went undrafted and spent 2007 playing Indy ball with the Chico Outlaws before being signed by the BoSox in January 2008 as a Minor League free agent. On Saturday, the 27-year-old — in not only his first MLB at-bat, but on the first pitch he saw — became a member of a very exclusive club when he smacked a grand salami. In 197 at-bats at Triple-A Pawtucket, Nava hit eight homers with 37 RBI and a solid .294 BA. He could see considerable playing time with both Jeremy Hermida and Jacoby Ellsbury on the DL with fractured ribs courtesy of collisions with Adrian Beltre. Get Nava rostered in AL-only formats and pray he stays away from Beltre.

Andres Torres, OF, San Francisco Giants: Torres, 32, just keeps plugging away in the lead-off slot for the Giants. In his past ten games, he’s 12-for-39, good for a solid .308 BA with five runs and three stolen bases. With Buster Posey moving into the three hole for the Giants, Torres should experience an increase in value, so he should be rostered in all formats to take advantage of his current hot streak and playing time.

Chad Tracy, 3B, Chicago Cubs: The Cubbies finally made a move last week, sending ailing Aramis Ramirez to the DL. Tracy got the call as, down on the farm at Triple-A Iowa, he was tearing the cover off the ball with five homers, 18 RBI, and a staggering .396 BA. Ramirez will likely be lost until the end of June, so Tracy is likely due for a short stay as a regular so get him rostered in NL-only leagues immediately to take advantage of this interim playing time opportunity.

Andrew Cashner, RP, Chicago Cubs: Cashner was recalled by the Cubbies on May 31 and the 23-year-old has shifted into his role in the bullpen very successfully. The 2008 first round pick (19th overall) has now pitched six innings for Chicago, allowing four hits, one free pass and no earned runs while striking out four. It looks like the kid is heading into a set-up role for the injury-depleted Cubs, making him a solid acquisition in all leagues using holds and also deep keeper formats.

Chris Resop, SP, Atlanta Braves: Let’s add former Hanshin Tiger Resop to the list of ex-NPB players enjoying successful returns to North America this season. Nearly a month ago, RotoRob identified Resop as someone to track and he continues to excel at Triple-A Gwinnett, having allowed a scant 46 hits and 27 walks in 73 1/3 IP while fanning 81 and chalking up a superb 1.84 ERA. On Thursday, Resop he pitched a complete game one-hitter with eight strikeouts. The Braves are faced with a conundrum of sorts as they have until June 15 to either promote/trade him or a clause in his contract allows him to become a free agent. With Kenshin Kawakami struggling (although, he has looked better of late), is a promotion to the Braves in order? One way or the other Resop will be on the move this week and makes for a great speculative pick in all deeper leagues.

Jonathon Niese, SP, New York Mets: The run of near pitching perfection continued this past week as Niese came a double shy Thursday against the Padres, tossing a one-hit gem with six punchouts. At the end of April, he had a run of three great starts before struggling in May. Is this a temporary aberration or is the 23-year-old southpaw turning the corner? I’m betting on the latter, so I recommend taking advantage of his current hot streak and getting Niese active in all formats.

Gaby Sanchez, 1B, Florida Marlins: Now that Sanchez had that career game Friday against Tampa with two homers and six RBI, he’s finally getting some love. He is certain to be one of the hotter wire claims this weekend. In 212 at-bats, Sanchez has seven homers, 28 RBI, and a decent .283 BA. More importantly, he’s owned in a scant 26 per cent of CBS leagues, so he’s available. Sanchez’s tenure at first base for Florida is more likely to be short term rather than long term with young phenom Logan Morrison tearing the cover off the ball at Triple-A New Orleans, but take advantage of Sanchez’s solid play and get him active in all formats for the coming week.

Chad Cordero, RP, Seattle Mariners: David Aardsma struggled out of the gate with injury issues, righted the ship in May, and has now come crashing back to earth with a thud in June. In his past two appearances, he’s given up five earned runs on five hits and a walk and hasn’t struck out a single batter in his last five appearances. Whether Aardsma is currently hurting or just simply struggling, the leash is getting shorter in the Northwest. Cordero was brought up to Seattle a week and a half ago after posting six saves and 22 strikeouts in 19 2/3 IP for Triple-A Tacoma. He’s not the same closer we saw save 113 games for the Nationals from 2005 to 2007, but considering Mark Lowe is likely done for the year, Cordero could be the best option in Seattle should Aardsma be relieved of his duties. A preemptive strike could prove to be very wise here.

Scott Atchison, RP, Boston Red Sox: How could I not mention the recall of Atchison, another of my favourite NPB reclamation projects? He was promoted Saturday to help address a depleted rotation in Boston. In a rather surprising move, Daisuke Matsuzaka went down again, this time with a right forearm strain. Michael Bowden is still scuffling his way around Pawtucket, so Atchison got his chance to make a spot start for the Red Sox, which he did Saturday with mixed results. Atchison enjoyed moderate success starting for Hanshin in 2008, but prior to his time in Japan, the last time he was a starter was all the way back to 2003 when he was hurling for Triple-A Tacoma in the Mariner system. In all likelihood, the Red Sox will eventually make a trade to shore up the rotation, but in the interim, Atchison could be prove to be an asset in AL-only formats.

By Tim McLeod
This entry was posted on Sunday, June 13th, 2010 at 2:19 pm and is filed under BASEBALL, The Wire Troll, Tim McLeod. You can follow any responses to this entry through the RSS 2.0 feed. You can skip to the end and leave a response. Pinging is currently not allowed.