Dear RotoRob: Help on the Horizon? 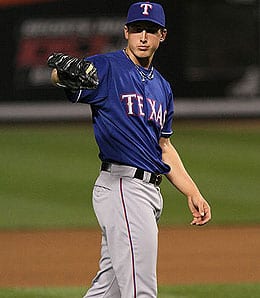 If you were unable to snag Derek Holland fear not, more pitching help is coming soon.

I lost out on Derek Holland in my 6×6 (losses count) league.

See any help on the horizon coming up soon?

I assume you’re seeking pitching specifically, and while you don’t mention whether this is an AL-only league or not, I’ll assume it’s a mixed league. So based on that, here are some pitchers I’d attempt to nab as soon it becomes clear they’re headed to the Show.

I’m expecting to see Jake Arrieta get the call to Baltimore soon, and it’s obvious he’s ready. He’s been the best pitcher in Triple-A this season, and while the control worries me somewhat (he could get tagged in the majors early), I think he’ll adjust in time. And it’s not as if he’ll be pitching in pressure type situations for the Orioles.

Believe it or not, former top prospect Bryan Bullington has been lights out and the way KC’s rotation has looked (other than Zack Greinke), it wouldn’t shock me to see him get a chance for the Royals. Bullington has been almost unhittable this year, and his control is again off the charts. It’s just about staying healthy for him as injuries have derailed his career up to this point.

Chris Resop could get a look in Atlanta if Kris Medlen fails to be the answer for the injured Jair Jurrjens. Another possibility is the Braves will have to address the awful pitching of Derek Lowe and Kenshin Kawakami. Resop’s return from Japan has gone brilliantly. He’s the poor man’s Colby Lewis.

I’m a huge Jeremy Hellickson fan (have owned him in my keeper league since prior to the 2009 season), but there’s just no room in Tampa right now. However, the moment one of the Rays’ starters gets hurt, you need to descend on Hellickson like a seagull on a French fry.

By RotoRob
This entry was posted on Monday, May 17th, 2010 at 10:11 am and is filed under BASEBALL, Dear RotoRob, RotoRob. You can follow any responses to this entry through the RSS 2.0 feed. You can leave a response, or trackback from your own site.