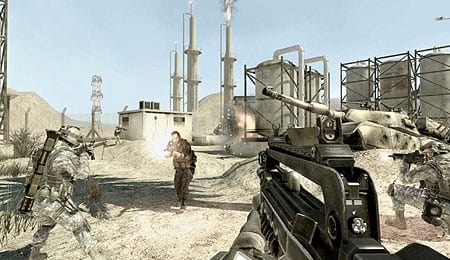 Thankfully, the oil refinery in Fuel is not run by British Petroleum.

When Activision initially announced the Stimulus Package would cost 1,200 MS Points (US$15) and contain just three new maps — along with two updated maps from Call of Duty 4: Modern Warfare — there was an outcry from the gaming community about the escalating cost of DLC. Then it got released and just about everyone bought it anyway.

Operating under the “if it ain’t broke, don’t fix it” business model, Modern Warfare 2 is back with an identical offering in terms of content breakdown (three new maps, two updated ones) and pricing (still 1,200 MS Points/US$15). Dubbed the Resurgence Pack, these new maps are available now on Xbox Live with a yet-to-be-announced future release date for the PlayStation 3.

Joining the Modern Warfare 2 party are the brand new Carnival, Trailer Park and Fuel as well as Strike and Vacant from Call of Duty 4. Here’s my take on what Activision and Infinity Ward are offering this time around.

Perhaps my favourite of the ten post-launch maps, Carnival is completely unique compared to the other multiplayer settings in Modern Warfare 2. It’s a huge map with tons of identifiable landmarks, allowing teammates to easily call out enemy locations. There are also plenty of different ways to engage with long lines of sight for sniping (including a hollowed out rocket ship), multiple paths for circumventing said snipers, lots of interesting little hiding spots and ample cover. Plus, with so many places for combat to take place — rollercoaster, funhouse, castle, bumper cars, etc. — you’ll find games evolving very differently from one to the next, which is great. This is just a very well designed map.

Visually this map is a lot of fun with all the signature accoutrements of the stereotypical trailer park, including discarded beer cans and kegs, plastic flamingos and even a lawn gnome. It’s so authentic you can practically smell the bologna frying! However, despite the fun setting, the fighting here tends to be pretty straightforward in that you’ll either need to embrace moving methodically and checking corners or get killed a lot. That’s because with so many trailer interiors and random debris to conceal enemies this is a camper’s paradise. It’s not a bad map, but it’s the weakest of the new offerings.

A large deserted oil complex is the setting for Fuel, which is one of the more wide open maps we’ve seen in Modern Warfare 2. The map is essentially split in half with one area containing several multi-level office buildings along with some warehouses and stacks of oil barrels to provide cover. There’s also a large section devoted to undeveloped desert terrain, punctuated by several large scalable rocks. The first area is all about intense close-quarters-combat, while the open zone favours those with quick reflexes and steady aim. However, both sections leave you vulnerable to roof-based snipers as you move from cover. One thing that stood out for me about Fuel is that it’s very bright, making for clear visuals. It’s a very strong addition, and it vaults Rust and Afghan as my favourite desert-themed experience.

The first of two revamped Call of Duty 4 maps, Strike has a very similar vibe to Karachi, Invasion and Crash. It’s another urban warfare setting with plenty of multi-tiered mayhem throughout the city, which makes for an enjoyable and nerve racking experience sweeping through the buildings. Despite the large size, the firefights here are intense, with players tending to congregate in specific areas while other pockets of the map remain unpopulated. It’s a very balanced map and one that encourages the use of medium range assault rifles.

First seen way back in the original COD4 Perks trailer, Vacant remains one of the most intense multiplayer maps in the series. The fact that over half of it is covered greatly reduces players gunning for aerial killstreaks and really puts the emphasis on straight up gunfights. There’s plenty of cover to be found in the burned out office building as well as in the modest outdoor area, and the lack of elevated terrain makes sniping a non-factor. Vacancy has a much different feel than the other four maps found here and is a welcome addition to MW2.

While some will no doubt continue to raise the issue of cost, there’s no denying the quality of this second installment of DLC. If you bought the Stimulus Package then nabbing the Resurgence Pack is another must buy with the maps feeling better designed and more diverse this time around. If you’ve only got enough points for one of the two, go with the Resurgence Pack.