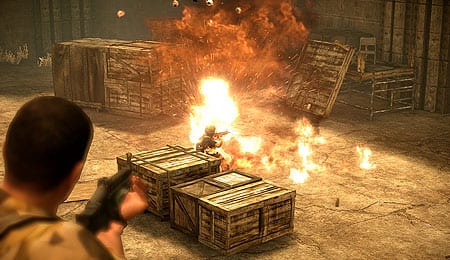 For all the games that have come and gone over the years, there’s really never been anything quite like Alpha Protocol. It’s an RPG set in the modern world, which is rare to begin with, and it also places actual weight and consequence on your actions to shape how your game will unfold. Developer Obsidian’s final product is far from perfect, but it definitely breaks some interesting ground.

Although it’s not really a third-person shooter, Alpha Protocol does use the same basic setup as many games in that genre. The shoulder buttons handle all the weapon functions, including aiming down the sight, firing and tossing grenades (or whatever gadget you’ve got selected). The only unique item on the shoulder is L1, which activates your chosen skill — such as a bullet time mode that allows you to queue up multiple shots in slow motion.

The actual layout of the controller doesn’t take long to become accustomed to, but that doesn’t mean it’s always smooth sailing. The sensitivity of the left stick is a constant hassle, both with moving around and aiming your gun. Considering you’re supposed to be a stealthy bad ass, those aren’t the best areas to be having difficulty. The too-close camera further exacerbates the issues.

Two other peripheral controls can also be filed under clunky. First is accessing your PDA, which contains mission objectives, maps and dossiers. It always seems to take a second too long to come up, and I find it odd that there’s not a quicker way to just check out the map. The method of changing gadgets, ammo and skills also feels outdated. You use the d-pad to pull up the menu, the R2/L2 buttons to cycle through them, the left stick to highlight your choice and “X” to select it.

Alpha Protocol is not a pretty game. At best it looks like a launch title for the PS3/Xbox 360 generation of consoles, and even that might be generous. The character models aren’t terrible, but they don’t move very realistically with the notable exception of your hand-to-hand combat moves. You’ll see clipping during the dialogue scenes and shadows that seem to skate across the ground rather than match the sentry’s movements.

Perhaps more damning than the technical flaws, however, is the overall lack of variety or attention to detail in the environments. Hallways and server rooms look recycled from one area to the next. Cityscapes are decidedly uninspiring even though you venture to some interesting locations — at one point you’re in a safe house in Rome where you can access the balcony, and when you step outside the city couldn’t feel less authentic or alive. It’s just dull.

Things hold up better on the audio side with respectable voice acting. Sure, some of it slips into the realm of the stereotypical, but considering I just finished Red Dead Redemption (which contained some of the best voice acting in gaming history), the fact that I didn’t find the efforts here sub par is actually quite impressive. It helps that the main character, Michael Thorton, is probably the best of the bunch and is able to accurately convey your emotional choices without going over the top.

The music is fine for what it is, though it’s not a standout effort, and the sound effects are your basic fare. There are a couple odd issues here and there, however, such as how your silenced pistol makes loud bangs when you fire it in the slowed Chain Shot mode. Thankfully enemies don’t react to the sound so it’s merely a cosmetic nuisance.

You are Agent Michael Thorton, recently recruited to Alpha Protocol, a clandestine organization that operates outside the jurisdiction of agencies like the FBI and CIA. Terrorists have shot down an airliner, and they’re sending you into Saudi Arabia to investigate. While that’s how the story begins, how it progresses is largely up to you, and the game asks you to start making key decisions right from the very start.

Step one in creating your own vision of Thorton is to choose a back story. Your selection from options like solider or field agent will help determine where your skills lie. For instance, if you have a strong military background then you’ll be more effective with weapons and less stealthy. You will also have the ability to alter some aspects of Thorton’s physical appearance, though it’s not the same level of customization seen in a game like Mass Effect.

Once you’ve got that all squared away you jump into the usual tale of corruption and terrorism, but where Alpha Protocol excels within this familiar framework is in allowing the gamer to craft a unique experience by providing numerous important choices. In fact, after the opening mission in Saudi Arabia, the game opens up the world and allows you to travel to any of the three locations at any time as long as there are missions available.

Dialogue options, similar in execution to the conversation wheel seen in Mass Effect, are frequent and your responses not only have a ripple effect throughout the game, but they also determine how the people you meet view you. Maintaining stronger relationships with your handlers gives you skill bonuses so it’s best to stay on their good side, but you’re ultimately free to flirt inappropriately or make light of serious situations. It’s up to you.

Within the dialogue are two interesting items that are different than what you’ve seen before. The first is that conversations only happen once, which means there’s no going back to get a preferred result without reloading an old save. The other is that there’s a meter running down, giving you a finite amount of time to select your response type. This adds a more natural flow to the dialogue and forces you to decide quickly. Occasionally I felt like the game was asking me to determine how to respond before I knew exactly what the person talking was going to say, but other than that I think the system works well.

Beyond the engaging story, leveling up your agent is another strong point in Alpha Protocol. My version of Thorton became a stealthy close-quarters-combat (CQC) specialist who did his killing face to face whenever possible. As you advance you unlock more and more skills, which range from useful to overpowering — this includes an ability that essentially turns you invisible. You’ll also gain access to better armour and weapons, though you’ll need to thoroughly explore the levels and scrounge for funds to purchase them.

The fact that you can alter the story dramatically with your choices, as well as how you approach each level based on the way you build your character gives the game high reply value. Your initial adventure will probably last around 15 hours, though it could be more or less depending on how much time you spend reading dossiers and searching for items.

Of course, none of that will matter if you’re unable to embrace the somewhat clunky combat because, believe me, Splinter Cell: Conviction this ain’t. You’ll get a feel for what I’m talking about almost immediately as you carefully take aim at a guard, line up a perfect headshot…and miss. The reticule gets large, further reducing your accuracy, and you squeeze off several more rounds to limited effect. It’s frustrating to say the least.

However, as I noted earlier, this isn’t a shooter. It’s an RPG with shooter elements, and that means there are stat rolls at work beneath the surface telling the game you’re missing because your skill with the weapon is low, and the gun itself has a poor accuracy rating. I hate to draw on the Mass Effect comparison again, but those that played the original ME as anything but a soldier had weapons they could fire and never hit with because they weren’t “trained” to use it. The same principle applies here, so it’s essential to your enjoyment that you go into it with eyes wide open about the combat.

Alpha Protocol does provide skills that greatly help offset your limited aiming capability, most notably the slowed down Chain Shot mode. Just think of it as a poor man’s Mark and Execute from Splinter Cell: Conviction or Dead Eye from Red Dead Redemption. The downside of the ability is that it’s so effective you may find yourself hiding in cover until your meter refills, which slows the game’s pace.

Also, you can’t discuss the game’s combat sequences without touching on the terrible enemy A.I. that exists from start to finish. There are times where you can kill a guard in plain view of another guard without reaction. Bodies don’t register with them, either, so there’s no need to worry about a slain victim being seen by another sentry. In fact, they often just disappear.

Enemies will also empty clips into the wall from just a few feet away, allowing you to unleash some kung fu treachery on them when they pause to reload. They’ll even get stuck and just stand there as you walk up and shoot them point blank. Bosses aren’t quite as incompetent, but instead lean toward the cheap category with seemingly unblockable attacks and super natural powers.

Despite the issues with the A.I. and largely repetitive missions, I never felt dissuaded from continuing. In fact, as odd as it sounds, Alpha Protocol’s shortcomings in controls and A.I. sort of balance each other out to create an average third-person shooter. If that was all the game had going for it it’d be easy to dismiss, but when paired with the story it’s definitely good enough to keep pressing onward.

Aside from combat you’ll also encounter a few mini-games (hacking, lock picking and bypassing circuits) in your quest to gather intel. The lock picking is my favourite and offers a nice twist on the usual rotating of the analog stick, instead requiring you to hold down L2 with enough pressure to line up the pick and then insert it with R2. It’s timed and alarmed, so it can create some cool moments of tension.

For all its technical warts, Alpha Protocol was still able to get me hooked on the story and character progression. Even in coming up short of its own lofty aspirations, this game still manages to do enough things right to create a fun experience that’s worth playing through more than once.