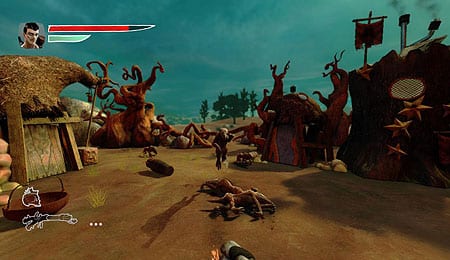 Trust me, if you think this looks odd, you ain’t see nothin’ yet…

Strange. Exhilarating. Unique. Grotesque. Yes, the world of Zenozoik is all those things and more as you’ll quickly discover while playing through Atlus’ recent downloadable title, Zeno Clash Ultimate Edition. The game, which plays primarily as a first-person brawler with some shooting elements, takes place across interesting locales and introduces you to bizarre creatures aplenty, making for one of the most original experiences you’ll find on Xbox Live.

Most of the action here will find you engaging in hand-to-hand combat with your enemies, and as is usually the case with first-person fisticuffs, things can be hit or miss (literally). The triggers control your attacks — right is a weak punch, left is a powerful one — and you can sprint with the bumpers and block/dodge using the “A” button. Time it just right and you’ll slip or deflect your enemy’s blows, opening their guard so you can deliver some powerful counterattacks.

The combat system actually packs some variety once you start mastering the combos and timing your counters, but since you’re often fighting several enemies at once you’ll end up employing a lot of hit-and-run tactics and many times it’s best to stick with the basics. Gauging distance can also be problematic as there will be instances where you think your blows should land and they won’t, and conversely enemies will score hits on you despite seeming to be too far away.

A rudimentary selection of weapons also shows up, transforming Zeno Clash Ultimate Edition into a basic first-person shooter. The aiming feels loose and a little on the clunky side, but considering you’ll be dual-wielding fish guns (no, seriously) maybe that was more of a design choice as the game’s primary focus is clearly on unarmed combat.

Without question it’s the graphical elements that set this game apart, and the design team deserves major kudos for creating a wholly distinctive world from the ground up. From darkened nether regions to a desert populated by gigantic creatures that tower overhead, the areas you’ll visit are extremely varied, detailed and vibrant. And yet, they somehow all feel part of the same strange world.

The environments aren’t the only things that will catch your attention as there’s also a cast of odd creatures inhabiting this place. A few appear mostly human, but the majority of them look like rejects from H.G. Wells’ The Island of Dr. Moreau — unnatural combinations of people and animals. Out of that group, two truly stand out: the towering, rooster-like Father/Mother, and the blind Hunter, who for my money is easily the baddest guy on Planet Zenozoik.

On the audio front you’ll be treated to an interesting, drum-heavy soundtrack that really fits what you’re seeing. It may be lacking a little in variety, but I thoroughly enjoyed it. The sound effects are also solid, especially the impact of fists on flesh. If there’s a weakness here I’d say it’s the voice acting. It’s not terrible by any means; it just doesn’t feel as original as everything else. Father/Mother’s nasally voice is excellent and what you’d expect it to be, and both Golem and Metamoq have voices you’ve heard a thousand times before.

You play as Ghat, who is one of the many offspring of the aforementioned Father/Mother, and the game begins with the accusation that you’ve killed Father/Mother. This doesn’t sit well with your brothers and sisters, and you’ll need to fight your way out of town before going on the run with your female companion, Deadra.

From there you’ll be treated to something of a meandering story that jumps back and forth in the timeline, showing your current predicament as well as flashing back to the events that happened leading up to the start of the game. There are some interesting battles, and as noted the locations are great, but the pacing can occasionally feel a bit off.

I definitely don’t mind a little down time when an interesting tale is being told, however that’s not really the case here as the story in Zeno Clash Ultimate Edition moves slowly and ultimately ends up bordering on the nonsensical. Too many questions are answered with other questions or evaded entirely, and when you finally do get a semblance of an answer to the game’s defining mystery you’re almost immediately presented with an even bigger conundrum to ponder.

Despite some shortcomings in the narrative, the storyline is good enough to move the action forward and make you want to learn Father/Mother’s horrible secret. And in a game like this that’s all you really need. Along the way you’ll be asked to overcome plenty of stacked odds with fist fighting sequences and a handful of weapon levels sprinkled in. The game tries to mix things up, but it can still become repetitive at times and devolve into little more than punching family members in the face.

The entire single-player experience should last 3-to-4 hours on normal difficulty, and by defeating the game you’ll unlock cheats, such as infinite skull bombs or doubling your melee power, that you can then use to play through the main adventure again. There are also a series of tower and pit challenges (eight in all) to fight through, either solo or in online/offline co-op, which will test your face punching abilities. Each challenge is timed and your score uploaded to online leaderboards.

Even though the story in Zeno Clash Ultimate Edition isn’t on par with its own originality in other areas, it shouldn’t dissuade prospective gamers. The game’s presentation is excellent and the combat is undeniably satisfying. Anyone looking for a truly different gaming experience should plunk down the 1,200-point asking price (US$15) and just enjoy the ride.

By Herija Green
This entry was posted on Wednesday, May 19th, 2010 at 5:45 pm and is filed under Herija Green, Video Game Reviews. You can follow any responses to this entry through the RSS 2.0 feed. You can skip to the end and leave a response. Pinging is currently not allowed.