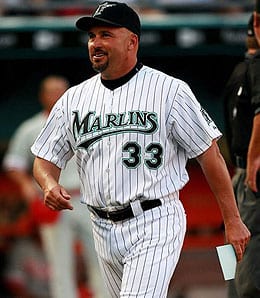 Fredi Gonzalez can’t be smiling after what Hanley Ramirez had to say about him.

With Fantasy owners aghast at the Hanley Ramirez episode and his subsequent ripping a new a-hole for manager Fredi Gonzalez, we thought we’d offer some lighter fare today with a few baseball links that have crossed our desk over the past few days.

Travis Kurtz sent me a link to his film, Wiffleball ’79, which will definitely bring back memories for anyone who grew up throwing tennis balls at a wall while their friends tried to hit them. It’s a very well done video and damn funny, to boot. Check it out here.

Over at Bloomberg Sports, they have recently launched a new video sharing feature called Mustrash Talk.

The vignettes, done by Keith Hernandez, give fans the chance to talk some smack and have some fun with friends as they negotiate the baseball season, especially if they are playing Fantasy. If you ever wanted to get a real close look at Hernandez’s ‘stache, this is your chance! Check it out here.

Contrast Johnny Cueto’s first four starts with his last four starts, including another tidy gem Monday night, and tell you don’t want him on your team. He’s been among Fantasy’s hottest pickups lately, but is still widely available, so act now. Find out more about Cueto’s performance over at Shawn Weaver’s fine Cincinnati Reds Blog.

By RotoRob
This entry was posted on Tuesday, May 18th, 2010 at 1:40 pm and is filed under BASEBALL, Links, RotoRob. You can follow any responses to this entry through the RSS 2.0 feed. You can skip to the end and leave a response. Pinging is currently not allowed.