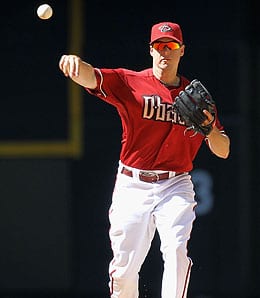 Kelly Johnson’s first slump of the season is over.

Kelly Johnson was mired in his first slump of the season, going just 2-for-17 over the previous six games with nine strikeouts before breaking out Friday night in Atlanta with two hits (including a double) and two runs. This skid had dropped one of the best early season surprises from .294 to .269, yet Johnson still ranks second in the NL with 10 homers and fifth in slugging (.610). Anyone wise enough to take our advice in the first Wire Troll of the season has definitely reaped plenty of benefits. And here’s some food for thought: how good would Johnson look in the moribund Atlanta lineup right about now? Sure, the Braves are showing signs of offensive life this week, but through the first six weeks of the season, they’ve been one of the worst hitting teams in the NL.

Ryan Braun (elbow) was back in action Friday, great news for a Brewer team that had failed to scored more than three runs in any of its previous eight games heading into their weekend series at home against the Phillies. Braun picked a lousy time to get plunked, as he had hit in six straight (five of them multi-hit efforts) before getting knocked out of Monday’s game early. Before Friday, he’d been blazing in May, batting .371 with an OPS of 1105 and 12 runs on just 35 at-bats. A dozen runs in 35 at-bats? Just think about that one for a second. Heading into the season, we ranked Braun as the best outfielder in baseball, and he’s done nothing to assuage that prognostication. In fact, you could easily argue that Braun is becoming the top player in all of Fantasy baseball.

Things have gotten so bad for the White Sox that now they’re getting bitch slapped by the Royals, falling 6-1 Friday night to open a three-game set in KC. Could Ozzie Guillen be the next manager to go? It’s up to starter Jake Peavy to turn things around Saturday, and lately, he’s been up to the task. After a simply abysmal start to the season, Peavy has looked quite impressive his last two times out, finally starting to justify our ranking him as 19th best starting pitcher last month. The window to buy low on Peavy has likely passed, and if he can maintain a consistent level of performance, he will combine with John Danks to give the Sox a superb one-two punch at the top of their rotation.

The Brewers plan to toss three straight lefties at the Phillies in their weekend series, although I’m not really sure that’s a great plan considering Philadelphia has fared even better against southpaws than righties. At any rate, it sure didn’t work Friday as Randy Wolf was feasted on by his ex-teammates. Wolf has looked shaky in three straight starts and has been really inconsistent all season, but this was his biggest beat down yet (5 IP, 7 H, 6 R, 6 ER, 2 BB, 2 K, 2 HR). He had a strong season in LA last year, and we ranked him 42nd among starters last month, but he simply hasn’t been able to put it all together. He hasn’t had a single start this year during which he gave up less hits than innings and less than three earned runs. And even when he’s limited the damage, Wolf’s command has been shaky. He’s typically a better second half pitcher, so I wouldn’t give up yet, but I could understand why an owner would cut his losses for a hot free agent at this point.

The way the Angels are hitting this year, I’m wondering if Mickey Hatcher’s 11-year reign as their hitting coach will be coming to an end soon. The list of regulars who have been unable to duplicate last year’s performance is staggering: Torii Hunter, Kendry Morales, Bobby Abreu, Howie Kendrick, Hideki Matsui, Juan Rivera, Erick Aybar, Mike Napoli, Brandon Wood and Maicer Izturis. In fact, the only player on the team who has more than 30 at-bats who has improved is Jeff Mathis, and he’s been out since mid-April with a broken wrist that will keep him sidelined for as long as another month. Someone has to take the blame for all these underperforming stars, right?

Manny Ramirez hasn’t exactly been tearing it up since coming off the DL, but he’s starting to make some noise, going 5-for-14 in the past four games with three runs, a double, five RBI and five walks against just two strikeouts. The man who has more career grand slams than anyone in the history of the game not named Lou Gehrig is hitting close to .400 and is averaging almost an RBI per game. How bad do you think the Dodgers missed Manny? We dropped him out of the top 10 this year, ranking him 22nd among outfielders, and of course, he hasn’t come close to that thanks to the injury. But if Ramirez can stay healthy the rest of the way, he is likely to wind up among the 25 best Fantasy flyhawks before all is said and done.

Baltimore’s next wave of kids can’t get here fast enough as the team’s attendance is on track to drop for the third straight season. It’s become painfully clear early on this year that the O’s are again not going to be competitive in 2010, so the team should soon start to unveil its prospects: starters Jake Arrieta and Chris Tillman should come first, followed by third baseman Josh Bell and first baseman Brandon Snyder, neither of which is ready yet. Perhaps an injection of youthful enthusiasm is what this team needs to put butts in the seats.

By RotoRob
This entry was posted on Saturday, May 15th, 2010 at 8:18 am and is filed under BASEBALL, Fantasy Notes, RotoRob. You can follow any responses to this entry through the RSS 2.0 feed. You can skip to the end and leave a response. Pinging is currently not allowed.