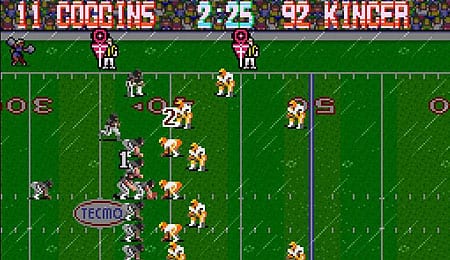 Perhaps no game defined my childhood more than Tecmo Super Bowl. It was the first game that contained all 28 NFL clubs and official rosters, and it was infinitely more fun than the games that had preceded it. I shudder to think how many hours were spent running Bo Jackson back to my own goal line only to weave my way around and through would-be tacklers en route to a 99-yard touchdown. Well, thanks to the recently released Tecmo Bowl Throwback I get a chance to relive those days and sink a few more hours of my life into this classic.

Tecmo has faithfully recreated the two-button control scheme, assigning the functions to the side-by-side A-B buttons on the Xbox 360 controller. You’ll also use X and Y in the playbook screen, but they are not utilized during gameplay. The only real new addition is the ability to switch between classic 2D and updated 3D graphics by hitting the right bumper. This can be done before or during a play, and in 3D mode you can toggle the camera view by pressing the left bumper.

Movement can be controlled with the right analog stick or the d-pad. The d-pad would obviously be the more traditional method, though I always find the 360 to be a little stiff in that regard. I found I preferred to play with the analog stick and didn’t feel much was lost in the translation.

The original pixilated 8-bit graphics return in all their glory along with a 3D version that looks similar to Madden NFL Arcade, at least in terms of the players’ disproportionate physiques. The newer graphics look fine, though they lack the charm and nostalgic element of the original.

Like the visuals, Tecmo has duplicated the sound effects and simplistic musical score of the original. Sometimes the best thing to do is nothing, and that was certainly the case here as I really enjoyed hearing all the familiar sounds. The updated audio is fine, but eminently forgettable.

Whether playing in the original 2D sprites or in the newly polished 3D realm, Tecmo Bowl Throwback plays exactly like it did nearly two decades ago. You’re still limited to eight plays (four running, four passing) and will cycle through passing targets with one button and pass with the other. There are no spin moves or stiff arms, just you and your ability to avoid tacklers or shed them by mashing the A button once they lock up. It’s beautiful in its simplicity.

The game is built off of the 1993 Super Nintendo release, complete with the identical teams and rosters found in that version. That means six divisions, 28 teams and only a handful of current NFL players — including a young, unproven Brett Favre. However, since Electronic Arts now holds the exclusive rights to the NFL and NFLPA licenses you’ll be greeted by generic teams and random player names. That means goodbye Favre, and hello Curtis Richey.

For those that demand authenticity, the game does allow you to edit city, team and player names to your liking. It will likely take a couple of hours to rename everyone, and unfortunately the game does not support file sharing so there’s no quick fix to be found. Also disappointing is the inability to edit the teams’ uniforms. That means even if you take the time to accurately name all the players and teams you’ll still be left with a Pittsburgh Steelers team that wears bright green and a 49ers one that dons all white. It’s an odd omission and I’m still hopeful that this option will be added in a future update.

Where Tecmo Bowl Throwback feels a little lean is with the game options, offering only pre-season, All-Star Game and season modes offline. While this remains true to the title’s roots, it would’ve been nice to see some sort of progressive season mode added. Online is similarly sparse with only head-to-head ranked or player matches available. That means no online leagues, which is disappointing considering the passion that exists among old school gamers. It’s hard to imagine some really good leagues wouldn’t have been formed, adding value to the product.

Of course, an online league can only succeed if the game performs well, and unfortunately that isn’t the case. Online games are often bogged down with lag that really throws off the delicate timing needed to make precise cuts and scroll quickly through potential receivers. In one game, I had a field goal attempt blocked when no defender had broken through the line. Then I watched as the ball bounced around only to have it appear in a defender’s hands 15 yards away from where it had been a split second earlier.

Two other gripes concerning online play: (a) The matches do not allow toggling between 2D and 3D; and (b) There is no penalty for quitting, which is pretty frustrating if you’ve spent 20 minutes playing a game only to watch your win go up in smoke because your opponent quits.

Even though I would’ve loved to see Tecmo go the extra mile with more customization, modes and online leagues, everything that made those old Tecmo Bowl games special is here, and it’s reasonably priced at US$10 (800 points). Those that didn’t grow up with it may well find it lacking, but those that did should enjoy Tecmo Bowl Throwback.