Another Year of Misery in Cleveland? 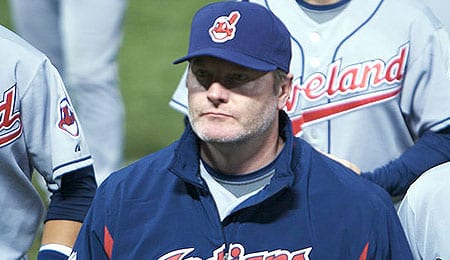 Indian fans no longer have Eric Wedge to blame for the team’s woes.

Stop me if you’ve heard this one before, Cleveland Indian fans, but you’re headed for another year of misery.

Of course, you already knew that as you love to hate your Indians, apparently the most despised team in baseball based on a rather dubious survey released by Neilsen this week.

It’s early, but the team is well on pace to spend a third straight year on the sidelines come October.

When we last checked in on the Tribe at the beginning of the calendar year, we wondered whether Larry Dolan would still be around (read: alive) by year’s end; well, he’s still kicking, but we were bang on that this season’s team would test his heart once again.

Former manager Eric Wedge is gone, and plenty would like to see GM Mark Shapiro follow him out the door. And frankly, if Cleveland doesn’t win at least 70 games this year, let alone make some kind of run at .500, perhaps he should be shown the door.

After dropping two of three in LA against the Angels, the Indians have now lost three straight series, all on the road, as they’ve slipped to third in the AL Central, three back of the second-place Tigers and just a half a game up on the fourth-place White Sox. Cleveland is now 9-21, but in fairness, it’s had a very tough schedule, with 15 of its first 21 games on the road, including the just-completed west coast swing.

The good news is Cleveland now begins a nine-game home stand, and with games against both division leading Minnesota and Detroit bookending this stretch, it has a chance to make a real push. Or, the Indians could find themselves falling into a deeper hole within the next week and a half. It’s a crucial home stand if Cleveland has any real hope of staying in the division race this season. If the Indians can come out with five wins or better in nine games, they will be in pretty decent shape before heading back onto the road with relatively winnable trips to Kansas City and Baltimore.

While the Indians’ offense was middling last season, it’s downright dreadful this year, as only Baltimore has scored fewer runs. However, the pitching has been much better in the early going. Last season, Cleveland had the second worst team ERA in the AL; this year, it has shaved well over a run per game off its mark to move into the middle of the pack.

In more promising news, catching prospect Carlos Santana is absolutely scorching at Triple-A, with five jacks and 20 RBI through 20 games. Our No. 12 prospect is showing an extremely advanced batting eye and judging by his 1059 OPS, his bat is major league ready. So how long do the Indians continue to wait while Lou Marson scuffles (464 OPS) in Cleveland? Probably for quite a while still. Santana needs to mature defensively before he jumps right into a starting role in the bigs, and Cleveland manager Manny Acta insists that the team is going to give Marson a legitimate chance to succeed. This is definitely a situation worth watching, however, as Santana could be a Fantasy dream when he finally arrives.

The bullpen, already improved this season, is about to get another boost now that Hector Ambriz has been activated from the DL. During his rehab stint at Triple-A, the Rule V pick has been filthy good, striking out 15 against just one walk in eight IP while allowing only one earned run. The 25-year-old struggled as a starter at Triple-A last year, but seems to have mastered this level as a reliever. He’ll take the job of the struggling Joe Smith, who was sent down to make room on the active roster. Ambriz could find himself earning some holds as long as Kerry Wood is out and Chris Perez is closing.

The Indians have fared particularly well against left-handed hitting, limiting their opponents to a .230 BAA after taking a battering to the tune of .280 against southpaws last season. Righty Jensen Lewis has been brilliant, with an .091 BAA in limited action; Tony Sipp has also been superb, as was Smith before he was dispatched, albeit again, both in small sample sizes. Among starters, righty Mitch Talbot – who needs to start being taken more seriously, at least by AL-only league owners – has been the best vs. left-handed hitting, but Fausto Carmona, David Huff and Jake Westbrook have all been almost unhittable against southpaws so far.

Back on the farm, another hitter has caught our attention. While Marson had been a bust so far as part of the package the Indians received for Cliff Lee, another one of the players that came over from Philly, shortstop Jason Donald, has been tearing it up. He was having a tough time adjusting to Triple-A after the Phillies promoted him last season, but in 10 games for Columbus in the Indian system, he ratcheted it up a notch. This season, however, Donald has taken it to another level altogether. He’s hit safely in nine of the past 10 games, putting up a 1069 OPS with a pair of dingers and a pair of steals. For the year, the 25-year-old is batting .333 and has scored 16 runs in 21 games with 11 walks against 16 strikeouts. He’s stolen six bases and shown some pop (.506 slugging), so the Phillies’ third round pick from 2006 needs to be considered a big league prospect, but he’s someone that you almost never hear anything about.

By RotoRob
This entry was posted on Friday, April 30th, 2010 at 6:48 pm and is filed under BASEBALL, RotoRob, Team report. You can follow any responses to this entry through the RSS 2.0 feed. You can leave a response, or trackback from your own site.