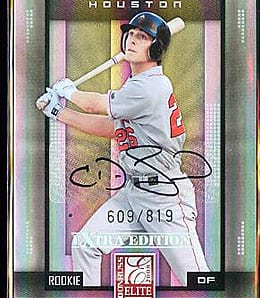 Don’t look now, but the Astros have rhymed off four straight wins and are now holding their own after a simply abysmal start. Houston has even pulled within a half game of the Reds and Cubs for a share of fourth place in the NL Central. The offense is still the worst in the NL, but at least the pitching is heading in the right direction. As we’ve done a couple of times in recent days, lLet’s again turn our attention to Houston’s minor league ranks and check in on some of their prospects.

Outfielder Collin DeLome is one Astro prospect that is worth getting excited about. The team’s fifth rounder in 2007 was considered one of the top athletes of that draft, and with good reason – his power-speed combo is extremely enticing. DeLome is a big time power prospect, having smacked 20 homers and 10 triples at Double-A last year, but the 37 walks against 141 strikeouts is worrisome. Now at Triple-A, the 24-year-old still isn’t drawing walks (just two through 11 games), but at least he’s cut his strikeout rate (only five so far), something that’s helped him hit .286 with three dingers, eight RBI and two steals in the early going. By season’s end, DeLome should force his way to Houston, at least for a cup of coffee.

The Astros seem to have a nice collection of outfield prospects who have major league potential. It’s too bad that Carlos Lee is signed through 2012, especially since he’s off to such a crappy start (0 homers, 1 RBI, .145 BA through 14 games) that he’s actually getting dumped in some extremely shallow leagues. I’m sure the Astros would love to trim some payroll, and Lee’s contract is looking like a major albatross right now. Clearing space for some of these youngsters has to be a priority, but that’s easier said than done with such an unwieldy deal as Lee’s bogging Houston down.

In the infield, shortstop Wladimir Sutil showed a bit of development offensively last year at Double-A, but not enough for the team to move the 25-year-old to Triple-A this season. He has absolutely no pop – in fact, Sutil’s home run last year is his only long ball in over 550 professional games – but is a good contact hitter. He’s spent plenty of time batting leadoff in the minors, and while he’s batting .304 so far this year, the fact that he’s only drawn one walk is a concern. The slick-fielding Sutil is part of the Astro Venezuelan pipeline, a program that has been quite successful over the years, but I don’t see this kid ever rising above bench fodder.

Injury-prone middle infielder German Duran is trying to get his career back on track. The former Ranger prospect, taking in the sixth round in 2005, played 60 games with Texas in 2008, and would have had a great opportunity to see some full-time duty that year when Ian Kinsler got hurt, had Duran not been hurt himself. He missed most of the 2009 season with more health woes, and Texas cut bait mid-season, allowing the Astros to claim him on waivers. Now 25, Duran has utility man potential given his defensive prowess and ability to play third, second and short, and he’s batting a robust .325 through 11 games at Double-A, so he may get back to the Show yet.

Another utility infielder type, albeit a more aged one at 28, is Edwin Maysonet. He’s had tours of duty the past two years with Houston, including a 39-game stint last year in which he hit .290 and looked like he might stick as a utility man in Houston. But before we get too excited, consider that this 2003 19th rounder hit just .235 with one homer in his 59 games at Triple-A last year. And this season his numbers are even worse despite the fact he’s either reached base and/or driven in a run in all of his 10 starts. And Wednesday night Maysonet did reach base three times, hinting that he might be coming around. He’s got the speed that would make him a decent utility man, but he lacks pop and is just a .255 career hitter in the minors.

One of the Astros’ top pitching prospects, and one of their most intriguing as he’s the first product of the team’s recent scouting foray into the PacRim is righty Chia-Jen Lo. The 24-year-old reliever was signed out of Taiwan in 2008 and in his pro debut last year he was pretty much untouchable at High-A and continued to impress upon a promotion to Double-A. Lo’s control definitely needs work (20 walks in 39 IP at Double-A last year and another six in 9 1/3 IP this season). He has a ton of international exposure in various tournaments and plenty of closing experience, but the Astros have strictly been employing him as a long reliever so far. Don’t count out the possibility that Lo could wind up starting – it seems Houston is still evaluating its options with this kid.

Another Asto minor league reliever – and yet another former Ranger prospect – is Matt Nevarez, who is a big boy (6’4”, 220) in the Rich Garces mold. A product of an excellent baseball program at San Fernando, California, Nevarez was taken in the 10th round of the 2005 draft by Texas. Dealt to Houston mid-season for Ivan Rodriguez, the 23-year-old righty showed fantastic strikeout potential last year, splitting the season between the Sally League clubs of the Rangers and Astros, fanning an eye-popping 113 batters in 78 1/3 IP. More impressively, he really improved his previous control problems, walking just 30. However, upon his promotion to Double-A this season, Nevarez’s wildness has resurfaced, as he’s walked seven in just 4 1/3 IP with five Ks. On the plus side, he’s tossed four straight scoreless outings, so seems to be settling down. Nevarez has closer potential as evidenced by the 22 saves he put up last year, so this is a youngster that bears watching as he gets closer to Houston.

By RotoRob
Tags: Houston Astros
This entry was posted on Thursday, April 22nd, 2010 at 7:41 pm and is filed under BASEBALL, Minor Matters, Prospects, RotoRob. You can follow any responses to this entry through the RSS 2.0 feed. Both comments and pings are currently closed.