Fantasy Notes: Boof Trying to Work his Way Back 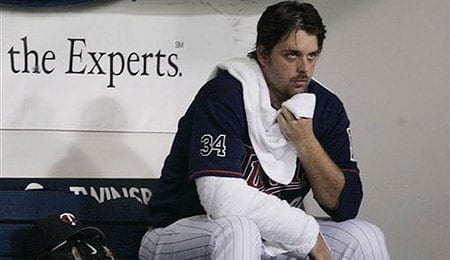 Boof Bonser is trying to resurrect his career with the Boston Red Sox.

Boof Bonser is still trying to work his way back to the majors after missing virtually all of 2009 in the wake of shoulder surgery. Last December, the Twinkies dealt him to Boston, but a groin problem this spring forced him to start the season on the DL. Bonser had a promising rookie season in 2006, but even after his disappointing 2007 campaign, he was still expected to be part of a young Twin rotation in 2008. And while he was sharper as a starter that year, he wound up in a swingman role, and had a butt ugly season. He could still help a Red Sox bullpen that had a rough opening week, perhaps in a long relief role, but Bonser is expected to spend the maximum allowable time on his rehab assignment in Triple-A. And judging by how hard he was hit in his first start, that’s a good idea. Clearly, there’s no reason to give Bonser any Fantasy consideration until he proves he’s healthy and can actually get out major league hitters, never mind Triple-A batters.

Last week, the 2010 Red Sox Hall of Fame inductees were announced and there are some interesting choices.

Jimmy Piersall spent less than half his career (eight of 17 seasons) with Boston, and his early career was marred with personal problems. However, in 931 games with the team he smacked 66 homers, drove in 366 runs and recorded an OPS of 737. He was an MVP candidate in 1953, and also received consideration for the award in 1956 (when he led the league with 40 doubles) and 1957. A superb defensive outfielder, Piersall won a Gold Glove in 1958 and made two All-Star games while in Beantown. He was also the first player in Red Sox history to record six hits in a game. He ranks 31st in team history in walks, and also places in the top 35 in plate appearances, at-bats, runs and triples.

Don Zimmer never played with the Red Sox, but he did manage them and also was a coach there for a couple of seasons. He spent five years as manager, guiding the team to 99 wins in 1978 – the fourth-best record in team history. Unfortunately, that wasn’t enough, as Bucky Dent did them in that year and despite the lofty win total, that team is more known for its failures. Zimmer and his steel-plated head came back to Boston for one season as a coach in 1992, giving him a total of eight and a half years in Beantown. He ranks seventh in games managed and won among Red Sox managers, but just ninth in winning percentage (411-304, .575).

Although he never made an All-Star game, John Valentin deserves recognition for the decade he spent in Boston. The team’s fifth round pick in 1988, Valentin wound up playing 991 games in a Boston uniform, smacking 121 homers and recording a .281/.361/.460 line. Originally a shortstop, he shifted over to second base when some dude named Nomar Garciaparra showed up, and he wound up finishing his career at the hot corner. Valentin, the first player in major league history to record an unassisted triple play and hit for the cycle, enjoyed his finest year in 1995, recording an OPS of 931, finishing ninth in MVP voting and winning his only Silver Slugger. He was particularly excellent in the playoffs, batting .347 with five homers in 81 at-bats over three playoff years and four series. Valentin ranks 13th all-time in Boston history in doubles and is also in the top 25 in runs, homers, RBI and walks. Always injury prone, Valentin was allowed to leave as a free agent after the 2001 season, and he spent one year with the Mets before packing it in. In his final two seasons in Boston, injuries limited Valentin to just 30 games combined.

Other inductees to the Red Sox Hall of Fame this September include Tommy Harper and Eddie Kasko.

By RotoRob
This entry was posted on Monday, April 12th, 2010 at 3:39 pm and is filed under BASEBALL, Fantasy Notes, RotoRob. You can follow any responses to this entry through the RSS 2.0 feed. You can leave a response, or trackback from your own site.