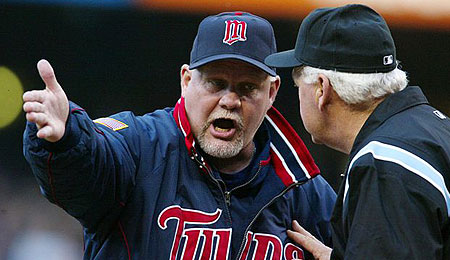 Ron Gardenhire could be in store for plenty of griping in 2008.

As he enters his seventh season at the helm of the Minnesota Twins, Manager Ron Gardenhire faces his toughest challenge yet.

Gardy’s done a great job in getting plenty out of this team – guiding them to the final five seasons in a run of six straight winning years that ended last season – but now he’ll have to do more with less.

Coming off a disappointing 79-win season, the Twins enter 2008 missing a trio of long-time stalwarts – clubhouse leader Torii Hunter bolted as a free agent to the Angels; Carlos Silva signed with Seattle; and worst of all, Johan Santana, probably the best pitcher in baseball, has been dealt to the Mets.

Well, for starters, the Twins will count on their offensive veterans, Justin Morneau, Joe Mauer and Michael Cuddyer to lead the way both on the field and in the clubhouse.

Morneau, especially, having recently signed the biggest and longest contract in Twins history (a six-year, $80-million extension penned last month), will need to bounce back after somewhat of an off year. The Canuck was the American League’s MVP in 2006 after hitting .321 with 34 homers and 130 RBI, but he dropped to .271 with 31 homers and 111 RBI last season. Morneau appeared to be well on his way to a career best in dingers in 2007, but managed just three long bombs after July 31.

After making the playoffs four times in the five years previous to 2007, Minnesota faces an extremely tough task in getting back to the postseason considering how improved the AL Central is. Defending division champion Cleveland looks like the team to beat; Detroit slipped last year, but retooled in a huge way this offseason and could easily overtake the Tribe; the White Sox are sure to rebound after a horrible 2007; hell, even KC, after avoiding 100 losses last season for the first time since 2003, appears on the right track.

Minnesota is clearly back in a very familiar mode of rebuilding. Replacing Hunter is Carlos Gomez, a youngster who was one of the keys to the Santana deal. He’s a great talent, but is he ready to man centrefield on an everyday basis for a major league team? Considering the only other options the Twins have are Denard Span and Jason Pridie, I’d say the job is Gomez’s, barring a last minute signing of a veteran.

With Santana and Silva gone, the Twins had two holes to fill in the rotation, but one of them they were able to plug internally thanks to the return of Francisco Liriano from Tommy John surgery. He’s being counted on as the de facto ace of this team (how’s that for some pressure on the youngster?), however, he’s yet to arrive in camp thanks to some VISA problems.

To replace Silva, the Twins penned veteran workhorse Livan Hernandez. With an ERA that’s gotten bigger in each of the last four years, and a waistline to match, I don’t like his chances of success in his first try in the AL. But if nothing else, he gives Minnesota some experience in a rotation that will likely include youngster Liriano (24), Boof Bonser (26), Scott Baker (26) and Kevin Slowey (23).

This team is talking about remaining competitive, but I have my doubts about its ability to even bounce back to .500 this season. Certainly, a lot of things will have to go right. For instance:

This staff has some real potential on paper, but looking up at the top of the rotation and seeing a kid with barely one year of experience under his belt who is trying to recover from major surgery scares me. I think Twins’ fans better steel themselves for a season of watching balls hit by opponents sailing majestically over those garbage bag-covered walls.

By RotoRob
This entry was posted on Saturday, February 23rd, 2008 at 12:02 pm and is filed under BASEBALL, RotoRob, Team report. You can follow any responses to this entry through the RSS 2.0 feed. You can skip to the end and leave a response. Pinging is currently not allowed.