Tkachuk Packing it in 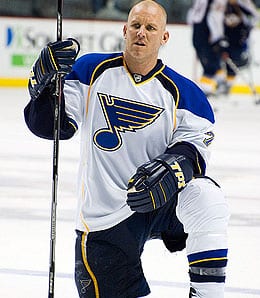 After 19 seasons, Keith Tkachuk is calling it a day.

The NHL will lose one of the greatest U.S.-born players in history when Keith Tkachuk retires at the end of the season.

On Wednesday night, when the Blues were unable to complete a big comeback in Chicago – a game which Tkachuk spent in the pressbox nursing yet another injury – it was announced that the 19-year vet would pack it in as of season’s end.

After the Blues’ final home game on Friday night, there will be tribute to Tkachuk, who certainly deserves plenty of kudos considering he was one of the greatest power forwards to ever play the game.

Now 38, the Boston native has played exactly 1,200 NHL games, amassing 538 goals, 525 assists and 1,063 points. This season, however, Tkachuk has dealt with plenty of health woes. He’s played in just 66 games and managed just 30 points – easily the worst season of his long career.

In 89 career playoff games, he put up another 56 points, but thanks to playing on mostly mediocre squads, Tkachuk never saw action past the Conference Finals, and only went that far just once, hence his relatively modest game total despite such a lengthy career.

Of course, it’s not going to happen this year either. The day after Tkachuk reached the 1,200-game mark on Monday, the Blues were eliminated from post-season contention, missing the playoffs for the fourth time in five years. With nothing on the line, Tkachuk opted to nurse his lower body injury from the press box on Wednesday.

Once Tkachuk sails off into the sunset, there will be just four NHL players remaining who ever doffed a Winnipeg Jets uniform – Teemu Selanne, Nikolai Khabibulin, Kris Draper and Shane Doan. The link to NHL hockey in the Peg is a dying breed, I’m sad to say.

Tkachuk left Winnipeg in style, potting 50 goals in 1995-96, and following that up with 52 the following season in Phoenix, for his only 50-goal campaigns. In fact, Walt also put up personal bests of 48 assists and 98 points that last season in Manitoba. Four times in all he scored at least 40, but the last time he did that was way back in 1997-98.

It’s definitely time for him to walk away. The constant pounding is starting to take its toll and Tkachuk’s offensive production has been in free fall for a decade now. It’s been a great run for the four-time Olympian, but like any good warrior, he should know when to walk away. Hell, Fantasy owners have known that they needed to dump him quite some time ago; now Walt’s cluing in as well.

By RotoRob
This entry was posted on Thursday, April 8th, 2010 at 12:05 pm and is filed under HOCKEY, RotoRob. You can follow any responses to this entry through the RSS 2.0 feed. You can leave a response, or trackback from your own site.