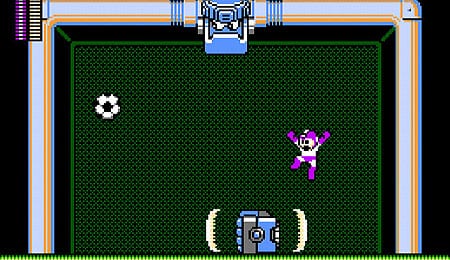 Yes, Mega Man still jumps with his arms up and mouth open — even when he’s using a pink weapon while fighting a giant soccer ball.

If two analog thumbsticks make video games hell for you, if a 3D rotating camera induces nausea, if you’re tired of cutscenes and epic plot twists about saving the world while discovering yourself, then fear not — Capcom has come to the rescue with Mega Man 10. You could take screen captures of Mega Man 10, send them through a wormhole back to 1989, and no one would know the difference. It’s platforming and shooting in total 8-bit glory, and it’s a hell of a lot of fun.

Capcom has done more than just replicate the authentic Mega Man experience; it’s resurrected it, first with the difficult-as-hell Mega Man 9, and now with Mega Man 10. If you’ve played the original games, either on the NES or on an emulator, you’ll feel totally at home here.

Jump. Shoot. That’s pretty much it when it comes to classic Mega Man games, and Capcom hasn’t changed the formula here. Press the Start button to bring up the weapon selection menu, then jump and run until you feel the need to shoot. The slide technique, added in later NES Mega Man games, isn’t here, as Capcom has stuck with the basics.

Yes, it can be simplistic, but the controls are responsive and crisp. For platforming, that’s really all you need. Movement can be controlled with either the left analog or the directional pad, but really, if you’re going to play what is essentially an 8-bit game, shouldn’t you be using the directional pad?

From the opening intro to the stage selection screen, every bit of audio/visual detail is perfect in Mega Man 10. Of course, you’ll never confuse it with, say, Uncharted 2, or even anything from the Playstation/N64 era. Hell, even Sega Genesis games look better.

Still, that’s not the point. The developers’ goal was to make it look and sound like an 8-bit game, and absolutely every detail — from the font to the sprites to the pseudo-percussion sounds in the music — is NES perfection. And whether it was intended or not, some of the backgrounds and sprites look like nods to games of that generation. I counted at least four enemies that felt cut-and-pasted out of the original Metroid, and one of the levels looks like the classic Castlevania games.

My only complaint is that on a HD screen, all gameplay takes place on a standard definition 4:3 aspect ratio. While I understand the need for authenticity, it seems rather silly to purposefully leave out 25 per cent of the screen.

If you’re new to classic Mega Man games, here’s how it works: as Mega Man, you go through themed levels until you meet a boss based on that theme. Once you defeat that boss, you gain their power, and when you defeat all of the bosses, you go on to the end stages as you defeat Dr. Wily’s nefarious schemes.

Hey, if it ain’t broke…right? The same formula applies here, only with minor tweaks. You can play as either Mega Man or Proto Man (a dude in red instead of blue with a slightly different gun), and you can purchase power-ups for a slight bit of customization. Like previous NES Mega Man entries, bosses have their weaknesses, and if you defeat them in a certain order and know which weapons to use, you’ll have a pretty easy time beating the game. You’ll see hints of this, as certain areas have blockades that can only be defeated by acquired weapons.

Each level has a different quirk, such as sandstorms, blocks of ice, or water. They’re used creatively to generate a good deal of variety; no level gets bogged down, and mini-bosses are clever. If the nostalgia doesn’t get to you, the level design will — their fast, fun, and unique situations will make you pull out your arsenal of boss-earned weapons.

Capcom has also included Time Challenge mode, where players can record their fastest times on a particular level and see where they stack up on a ranked leaderboard. For additional content after you beat the game, there are mini Challenge stages that simply require you to get from A to B while overcoming a certain obstacle.

When Mega Man 9 — the first NES-tribute release by Capcom — was released, I downloaded the demo and fired it up. I couldn’t even get past the second mini-boss in the demo because the timing required to jump over certain attacks was brutal. That, and I didn’t have the patience I did as a pre-teen with NES games. In Mega Man 10, Capcom was kind enough to include an Easy mode.

This was a brilliant decision that makes the game infinitely more enjoyable for people who love old-school platform-‘n-shoot games but simply don’t have the patience to repeat tricky sequences over and over until it’s instinctive muscle memory. I can still beat Contra with one life on my emulator because a zillion playthroughs have embedded every jump into muscle memory — but I don’t have the courage or time to become that adept at a similar game today.

In Easy mode, you can re-live your favourite NES memories and get through the game without much difficulty. While you can save your game after every stage, you can go old-school for authenticity and try to do it all in one sitting. In Easy mode, this should take less than 90 minutes for anyone with some Mega Man experience.

Easy mode doesn’t take anything away from die-hards who love their brutal jumping patterns. That’s still there in the other difficulty levels; this just makes the game more accessible so pretty much anyone who fondly remembers the NES can enjoy it.

Jump, shoot, run, repeat. Today’s games offer far more variety, yet there’s a simple joy that comes with 8-bit platforming. For the price, you get a nostalgic trip that blends classic gameplay and a new experience. It’s not groundbreaking by any means, but it sure is fun — and really, isn’t that what games should be, especially cheap downloadable games?

By Mike Chen
This entry was posted on Friday, March 26th, 2010 at 5:13 pm and is filed under Mike Chen, Video Game Reviews. You can follow any responses to this entry through the RSS 2.0 feed. You can skip to the end and leave a response. Pinging is currently not allowed.