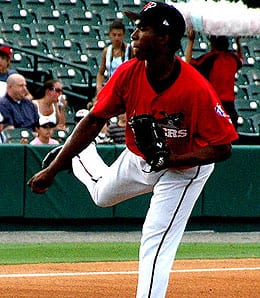 Neftali Feliz has a triple digit heater that will make him a serious impact rookie.

We’re back with more of the 2010 RotoRob MLB Draft Kit, as we continue our always popular Top 10 Lists That Fantasy Owners Always Wanted But Were Afraid to Ask For. So while Cliff Lee owners start to panic, let’s take a look at the players we expect to be the best rookies in 2010.

You’ve gotta love rookies. Rarely do players outside of Albert Pujols garner so much excitement. You hear reports about how this kid can smack 50 homers, steal 100 bases, or strike out 200 batters and you start to salivate. Rarely do things work out that way, but sometimes talent busts through in a big way and can carry you to a championship. Here are my 10 best bets for top rookies this year. I know a lot of them don’t have big league jobs right now, but it’s only a matter of time before they crack the lineup.

1. Jason Heyward, OF, Atlanta Braves: Heyward has been a man among boys. This year he will get to play with the big boys and I expect immediate success. Heyward is a legitimate five-tool athlete — he can hit for power, average and has enough speed to steal a handful of bases. He also doesn’t strike out much. The only negative on him is that he’s had some injury problems. I’m not sure if it’s just bad luck or the development of a trend. But it’s a risk I’d be willing to take because the rewards could be outstanding.

2. Buster Posey, C, San Francisco Giants: Yeah, I know the Giants just re-signed Bengie Molina, but sometimes talent just can’t be held back. Posey is that kind of talent. The kid can hit and he’s athletic enough that the Giants might give him some looks in the infield. Posey’s got decent power, but isn’t a classic power hitter. He’s more Joe Mauer (the pre-2009 version, at any rate) than Mike Piazza. Posey will also take a walk if he has to.

3. Neftali Feliz, SP, Texas Rangers: I hate hyping rookie pitchers. They almost always disappoint – Tommy Hanson not withstanding. But Feliz has the kind of arm that scouts salivate over — he can reach triple digits on the radar gun. Right now, he relies mainly on his fastball. But Feliz is working on his secondary pitches, namely a curve and changeup, and scouts expect them to at least be major league average. He had an unreal K/9 ratio (11.3) in his time with Texas last year. But remember not to get too excited as the Rangers might try to limit his innings despite Nolan Ryan’s protests.

4. Justin Smoak, 1B, Texas Rangers: Smoak has been compared to former Ranger Mark Teixeira. Both are switch hitters, both have power from both sides and both have a patient approach at the plate. Teixeira was more a polished prospect and a better defender. Smoak’s chance to show his stuff this year will depend on how well Chris Davis hits – or doesn’t hit, as the case may be. It may also simply be a case that Texas just can’t hold the kid back.

5. Carlos Santana, C, Cleveland Indians: Hey, another catcher. If you can latch on to an above average catcher in a keeper league you’ve got a huge advantage. In reality, Santana doesn’t have to be all that good this year to be at least an average Fantasy catcher. The guy has good power and plate discipline. His defense lags behind his offense right now, but you don’t care about that – Eric Wedge might, but you don’t (unless he ultimately has to shift positions, of course). While Santana will probably start the year in the minors to delay his service time, it won’t be long before he’s up and finding his way on to every Fantasy roster – just make sure it’s yours.

6. Chris Carter, 1B, Oakland A’s: This guy is a beast with unreal power. However, he might cool off the front rows of the Oakland Coliseum with his misses too. While strikeouts will always be a part of his game, Carter worked hard last year to become a more complete player and control the strike zone. The results were tremendous as he tore up Double-A pitching to the tune of .337 with 24 homers. Carter should have an opportunity to win the A’s 1B job out of Spring Training and if he does, his power will make him an asset to any Fantasy team.

7. Desmond Jennings, OF, Tampa Bay Rays: With Carl Crawford’s contract all up in the air, there could be big changes to the Ray outfield in the near future. Jennings might bring more to the table than Crawford did. He’s got great speed and some pop, but he’s got better plate discipline than Crawford. Jennings is more willing to take a walk and probably won’t strike out as much as Crawford. What this all means is you better get this guy now while you still can. You won’t be sorry.

8. Brian Matusz, SP, Baltimore Orioles: All of the sudden there is hope in Baltimore. With up and coming stars like Adam Jones, Nick Markakis, Nolan Reimold and Matt Wieters in the mix and slugging third baseman Josh Bell on his way, the Oriole offense is shaping up nicely. However, it’s the pitching that should get people excited. Chris Tillman and Jake Arrieta both have the makings of top of the rotation starters, but it’s Matsuz that could be the best of the bunch. He got a cup of coffee with the O’s last year and despite a shaky start, recovered to go 4-0 with a 3.73 ERA over his last five starts.

9. Alcides Escobar, SS, Milwaukee Brewers: Escobar is a born shortstop. He’s flashy in the field and has Gold Glove potential. But what you want him for is his speed. Although he’s still learning the nuances of base stealing, Escobar has game changing speed. He’s worked hard to become competent with the bat. He doesn’t strike out a ton, but he also has very little power. Escobar is a future lead-off hitter and I expect him to have a season similar to what Elvis Andrus did last year.

10. Stephen Strasburg, SP, Washington Nationals: I rank Strasburg this low because pitchers rarely come out of college and dominate. Yes, I know Strasburg is “special” (thank you, Scott Boras), but I’ve bought into pitching hype before and been burned. I’ll temper my expectations of Strasburg for this year. He’s got a great arm and should contribute in strikeouts when he gets called up, but wins may be hard to come by on the Nationals. In keeper leagues, he should rank higher because of his long-term potential, but again he’s a pitcher and those arms can go at any time.