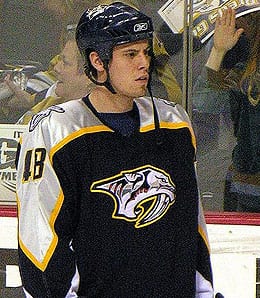 Shea Weber’s numbers are down this season, but he’s a great bet to rebound next season.

I went the controversial route and picked Mike Green:

It’s hard to call Capital defenseman Mike Green a disappointment when, as this is being written, he has 17 goals and 53 assists, making him the highest scoring defenseman in the league.

Still, he finished last season with an amazing 31 goals and 42 assists. Green is getting a lot more attention this season. Coaches match against him. Forwards never take him for granted. He hasn’t been given much room in which to work this season.

Next season, I suspect opposing coaches won’t focus as much on Green. Plus, I think he will get used to the attention and will figure out how to find more scoring opportunities.

Last season, Green was stunning. This year, he was great. Next year, I think he can return to stunning.

Read the rest of the Roundtable on FantasyPros911.com.

By Steven Ovadia
This entry was posted on Wednesday, March 24th, 2010 at 2:21 pm and is filed under HOCKEY, Roundtable, Steven Ovadia. You can follow any responses to this entry through the RSS 2.0 feed. You can leave a response, or trackback from your own site.