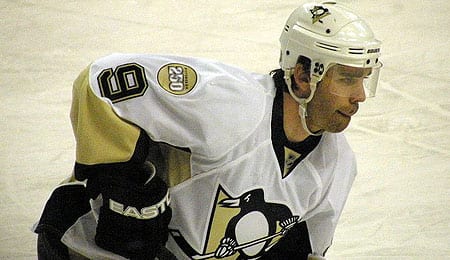 Pascal Dupuis is turning it on lately, so he could be a useful pickup.

This just in: it is still raining outside. At last check there was about five inches of rain or more depending on what part of the Tri-state area you are from. Even if you are not, that is a ton of rain. On the bright side, things are not flashing and the lights are staying on. This is essential to try to accomplish some writing assignments and such. I think it is comical that the wind was blowing so hard for a while there that you thought it was a tornado blowing in. I can assure you that it was not and that power is restored at least here.

So what needs to be done here is to give you three players you may be able to pick up in the first round of your playoffs or last week of your regular season (whatever the case may be). At any rate here are our three. Hide the women, children, and maybe the men as well.

Pascal Dupuis, LW, Pittsburgh Penguins: This is a bit of a risk because Dupuis is owned by so few owners in Fantasy leagues, but this is the time of year where this type of player is essential to your team’s crunch time success. The ice time he’s getting is not impressive, but lately it’s been a bit over 15 minutes which is progress and with the unfortunate slide of Max Talbot, this is Dupuis’ time to shine. I also like the six points in six games. Expect a bit more of that as the season winds down and Dupuis gets more time with that Sidney Crosby fellow. Dupuis is a very easy claim out there as honestly no one is really paying attention.

Manny Malhotra, C, San Jose Sharks: Here is another guy who honestly just gets little credit, but in deeper leagues is a nice third or fourth centre on your team. The 28 points in 55 games do not seem like much, but that +17 ranking and the occasional offensive outburst is enough to at least take a look and maybe even take a gamble at adding a guy like Malhotra. He plays almost 16 minutes a night so, again, you would have to cover a bit and find a guy that plays a bit more. When Maholtra is healthy, he is the type of player that can provide an unexpected spark for your team. You could do worse, but Malhotra is definitely not worse.

Chad LaRose, LW, Carolina Hurricanes: Really? Yes. LaRose was a very solid player in 2008-09, but injuries this season really derailed him badly. It seems those issues are long gone now and he has the ability to be a surprise on your Fantasy team. Granted, we dug really deep here as LaRose is owned by very few Fantasy leagues owners (less than 5 per cent), but his potential — especially on a team that is making a playoff push — should catch your eye. He even played over 20 minutes a couple games ago which is a sign that his stamina is 100 per cent at last. That is important and add in the fact that he is fresh, it makes him a viable pickup that no one will notice. Stash LaRose on your bench and sneak him in a few nights. It will surely pay some dividends for your Fantasy roster.

Next week we go for the jugular and point out some players that you should have added on your Fantasy team sooner, but may still have a chance to acquire. See you then.

By Chris Wassel
This entry was posted on Monday, March 15th, 2010 at 10:23 pm and is filed under Chris Wassel, HOCKEY, The Wire Troll. You can follow any responses to this entry through the RSS 2.0 feed. You can leave a response, or trackback from your own site.