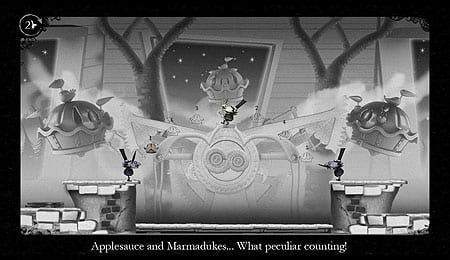 The villainous Winterbottom is a buttwit through and through.

With a whimsical title like The Misadventures of Mr. P.B. Winterbottom I kind of had a feeling going in that I would be seeing something a little different. On that front this game doesn’t disappoint. Many of the things you’ll see are unlike any game you’ve played before, and the challenge level is on par with some of the more devious brain teasers I’ve encountered.

Although The Misadventures of Mr. P.B. Winterbottom is primarily a cerebral exercise, you’ll still need to do some platforming to navigate through the levels. To do this you’ll need to jump, which is done by pressing and releasing the A button — holding it down will open your umbrella, allowing you to descend slowly — and smack objects with the umbrella by hitting X.

Beyond your basic movements, Winterbottom can also clone himself by holding down the right trigger, which records your movements. Once you release it your newly created clone will duplicate your recorded actions. If you mess up or the clone is no longer useful you can delete them by pushing the Y button. One stage requires the use of portals rather than recordings. In these instances you’ll activate the portals via the left bumper. It’s a simple scheme that’s easy to use, though at times I found myself using the right trigger to smack clones. Guess I need to stop playing so many shooters.

Set sometime in the early 20th century, The Misadventures of Mr. P.B. Winterbottom presents itself as a silent film. Nearly everything you see is in black and white, and the story itself is told via rhyming limericks in between levels. In many ways the artistic style looks like something right out of a Tim Burton movie with dark, jagged backdrops that must be tackled in Winterbottom’s endless quest for pie. Adding to the colourless presentation are nice touches like old fashioned film grain along with scratches and rips on the screen.

Winterbottom himself is something of a cross between Ebenezer Scrooge and Snidely Whiplash from the old Rocky and Bullwinkle Show. He, too, has an angular face with a jutting chin, protruding nose and sinister moustache. His ensemble includes a vintage stove pipe hat and an umbrella.

The musical score is brilliant in its simplicity. Instead of going the route of creating a caricature of the piano music often associated with silent films, developer The Odd Gentlemen instead favour a broodingly familiar yet oddly fresh selection of music to perfectly compliment the visuals. There’s no other game that looks or sounds like this one on the market, which is no small feat.

Those that have played Braid will undoubtedly find some similarities between that puzzler and this one, as in The Misadventures of Mr. P.B. Winterbottom you will be required to create clones of yourself to solve the game’s many puzzles. Each level allows for a specific number of clones that can exist at any given time, which means you’ll need to use them judiciously. Later on, the game puts an interesting spin on that formula, but rest assured the creation and controlling of multiple mustachioed “buttwits” is essential to advancement throughout.

The basic story here is that P.B. Winterbottom has an insatiable appetite for pie — think Daniel Plainview from There Will Be Blood here where he says he’s got a competition in him and wants no one else to succeed…only substitute pie for oil. Winterbottom is obsessed with consuming every flake of delicious crust regardless of the consequences. Thus when he encounters the mysterious Chronoberry Pie he literally pursues the mouth-watering confection through time itself.

As noted earlier, the game itself is presented in the guise of a silent film as you make your way through five chapters, each with 10 levels to traverse. Things start off fairly straightforward, but can get difficult in a hurry. It’s in the difficulty of solving the game’s many puzzles that the value is found as were you to know in advance how to solve them, all 50 levels could be completed in not much more than an hour.

However, you’re almost certain to get stuck several times throughout the game, sometimes to the point that you’ll invest 20-to-30 minutes or more into clearing one of them. That difficulty can be a bit of a double-edged sword as it undoubtedly makes solving the puzzles all the more satisfying, but it can also be frustrating to fail over and over again to the point that you may want to stop for a while. The game does do a strong job of changing up the puzzles by adding little wrinkles along the way like environmental hazards or making some pies only obtainable by your clones. By doing this it remains fresh for the duration of the game.

After completing each chapter you’ll unlock a corresponding bonus stage, each of which contains five levels (25 in all). Every one of the levels has two goals to meet, one for time and one for recordings (how many clones you use), which brings a lot of replay value and challenge to the bonus levels. In fact, you could make a pretty strong case that the game’s toughest tests are found here.

There’s very little not to like about The Misadventures of Mr. P.B. Winterbottom. It’s visually impressive, presents a satisfying challenge and is clearly a game the developers enjoyed making. Not only that, it bucks the recent trend of $15 XBLA games and delivers all of the above for just 800 MS Points ($10). My only gripes are the relatively short length and limited replay value in the main game. That shouldn’t be enough to dissuade anyone from downloading it, however, as it’s definitely a unique title that’s absolutely worth experiencing.

By Herija Green
This entry was posted on Monday, March 1st, 2010 at 9:15 pm and is filed under Herija Green, Video Game Reviews. You can follow any responses to this entry through the RSS 2.0 feed. You can skip to the end and leave a response. Pinging is currently not allowed.