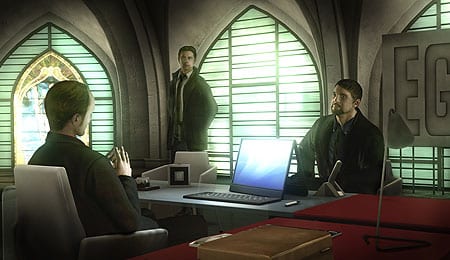 You’ll meet some interesting characters while on the trail of the Origami Killer.

It’s always easier to copy someone else’s blueprint for success than to invent your own. That’s why for every truly innovative motion picture or recording artist there are countless cookie cutter formula films and sound-alike performers. The world of gaming is no different, which explains the seemingly endless line of Modern Warfare 2-inspired shooters that are on the way. That general aversion to risk taking makes Sony’s brand new release, Heavy Rain, all the more exciting because it steps outside of accepted gaming clichés and offers up a completely distinctive experience.

When it comes to games played with a traditional controller, Heavy Rain manages to be about as non-traditional as you can get. Outside of walking (hold down R2), switching camera angles (L1) and bringing up your thoughts/dialogue options (L2) no other buttons serve a specific purpose. Instead, the game plays out through a series of interactions and quick-time events (QTEs) where manipulating the right stick, face/shoulder buttons and even the controller itself creates your character’s actions.

For instance, you may be asked to move the entire controller back and forth to brush your teeth, or to hold down several buttons in a row to climb through a window. It’s an ambitious choice, and one that serves the game well for the most part. Frantic sequences will have your hands working feverishly pressing buttons and flicking the right stick in all directions, while more serene moments might ask you to gently move your controller to crack eggs or sooth a crying baby.

Dialogue selections are handled by choices swirling around your head, usually starting with four that correspond to each face button. At times you’ll be given a selection of topics to pursue, while others will give a choice of attitude — such as whether to be aggressive, sympathetic or persistent when attempting to extract information from a witness. These dialogue choices along with your ability to successfully navigate the QTEs will help shape how the story progresses.

While things generally run smoothly on the control front, I did encounter some frustrating moments. This is mostly because when situations become tense, the game makes your commands and dialogue choices blurry and shaky to indicate anxiety. When this happens it can become difficult to distinguish between being told to hold down a button or press it quickly, which leads to unnecessary failures. You can also “say the wrong thing” as the square and circle look very similar when your conversation choices are trembling. I like the idea of fear affecting your judgment, but the actual execution falls a bit short.

Heavy Rain is a cinematic experience to say the least, and a big part of what makes that aspect so successful is the crisp visuals. By transporting gamers from one specific location to another as opposed to allowing the player to roam, Heavy Rain has been able to create areas with stunning detail. It may not be photo realistic just yet, but I’d argue you can see it from there. A fixed camera also limits the angles you can view, adding tension since you’re unable to look around you.

Part of what makes the locations here so exquisite is that the vast majority of them feel organic, lived in and absolutely believable. There’s a level of creepiness they obtain by making the mundane dangerous; a sense that you never know what’s waiting around the next corner. Add to that the constant gloom of a perpetual downpour and you’ve got a game that does an excellent job of creating the somber mood a story about a serial killer needs to be successful.

The character models are generally very good with natural movements. Facial detail is also strong, though a couple characters have unusual looking mouths. Staying in that area, lip synching isn’t always spot on — in most games it wouldn’t be much of an issue, but in a game that contains so much dialogue and relies on gamers immersing themselves in this world it can be distracting.

Obviously with all that dialogue the voice acting also becomes of central importance, which is one area that Heavy Rain can be hit or miss. Thankfully, the four primary characters tend to be the strongest in terms of delivery, but some of the peripheral characters border on painful. The children are shaky at best while one character looks like a computer programmer but sounds like someone doing a poor Al Pacino impression from Scarface.

Heavy Rain does feature some very good musical efforts, which more than hold their own in combining with locations and camera angles to create palpable tension. Occasionally during some of the more sentimental scenes I thought things sounded a little too much like they were ripped straight from the soundtrack of Days of Our Lives, but when the chips are down the musical score delivers.

Developer Quantic Dream will tell you point blank this isn’t a video game in the usual sense of the word, instead labeling their creation as “interactive drama.” It’s a fitting designation because Heavy Rain really is more like a movie you affect with your decisions than a game in the mold of Modern Warfare 2 or even Uncharted 2: Among Thieves. This means your finely honed ability to survive massive firefights, spring across chasms with perfect timing and execute complex combos will do little good here. Skill isn’t meaningless per say, but since you can literally miss every command prompt and still complete the story, being an adept gamer isn’t necessary.

You assume the roles of four different characters: Ethan Mars (an architect that has endured personal tragedy), Madison Paige (an investigative journalist), Scott Shelby (a private investigator) and Norman Jayden (an FBI profiler). Heavy Rain does a strong job of fleshing out these characters, and you’ll become emotionally invested in them as the game progresses. The fact that each of them is faced with ongoing physical or emotional challenges feels a bit cliché, but they’re given enough depth that those frailties become merely a part of what they are rather than defining them.

Things begin incredibly slowly by video game standards, so understand going in that patience is a must as the early chapters are highlighted by such scintillating activities as shaving, getting dressed, setting the table and carrying groceries. This deliberate build serves to establish the motivation for one of the primary characters, however, and is ultimately an important piece of the story.

Once things pick up, the game moves along at a fairly brisk pace, though not at the expense of continuing to provide insight and adding additional layers to the characters. Heavy Rain definitely strikes a nice balance between action sequences and plot development, allowing the story to unfold while keeping gamers on their toes. That isn’t to suggest that the story being told is airtight, but it’s certainly leaps and bounds above what most games offer.

Without getting into too much detail, the basic story is that there’s a serial murderer dubbed the Origami Killer on the loose. Their M.O. is drowning victims in rainwater and leaving pieces of origami at the crime scene. With the arrival of another storm comes the disappearance of another victim, which causes the FBI to send Jayden in to investigate. As you go you’ll be alternating between all four characters, each of whom is in some way connected to the killer. How you feel about the story itself will vary from person to person, and it’s tough to discuss even in general terms without potentially providing spoilers. Suffice to say that there will be some that enjoy the game but still don’t like the eventual revealed identity of the murderer.

Despite the presence of more than a couple red herrings and some rather liberal use of poetic license in the plot, where Heavy Rain truly succeeds is in creating tension. There’s no game over. No multiple save files for trial and error. If one of your characters dies, the game rolls on without them. If a suspect escapes, you may not get another chance to interrogate them. This rippling effect really adds weight to every scene and also provides Heavy Rain, which clocks in around seven-to-eight hours with no multiplayer, with a surprising amount of replayability. You’ll want to know how things would’ve changed had you not saved Character X or had you questioned Character Y another way. There are also plans for downloadable content entitled Heavy Rain Chronicles, which delve further into the characters’ backgrounds. The first episode is set for release on March 4.

One nice thing is that you’re not obligated to start from scratch to see how different decisions affect the outcome, as you can reload any completed scene and replay it. When loading, the game offers you the chance to save, thus overwriting the existing file and allowing you to progress toward the end from that point, or to suppress the auto-save function if you just want to experience another round of QTEs (or Madison’s shower scene).

It’s worth noting that my copy of the game did have some technical issues with my save file becoming corrupted and failing to load. Ultimately I ended up having to backtrack nearly two hours before finding a scene that would load properly. I’ve read other complaints surrounding the same issue as well as some freezing, which I also experienced on occasion. With the game not yet in full release domestically it’s impossible to know how prevalent the issue is, but just knowing that it exists can make for some nervous moments during load screens.

Beautifully written dialogue, an interesting and well-paced story and pulse-pounding tension combine to create a truly fascinating ride. Heavy Rain falls short in some areas, but as an overall package it offers a completely fresh take on gaming. Those that believe a video game doesn’t need a body count in the hundreds to be entertaining should take a chance on Heavy Rain.

By Herija Green
This entry was posted on Tuesday, February 23rd, 2010 at 1:15 pm and is filed under Herija Green, Video Game Reviews. You can follow any responses to this entry through the RSS 2.0 feed. You can skip to the end and leave a response. Pinging is currently not allowed.