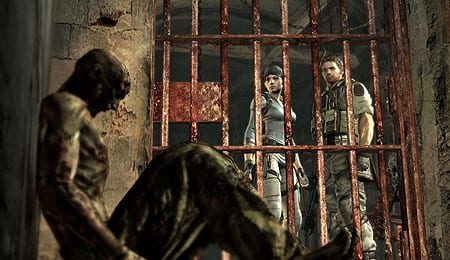 Lost in Nightmares reunites the protagonists from the original Resident Evil for one more dance with Umbrella.

It’s been nearly a year since Capcom took Resident Evil, the trailblazer of the survival horror genre, in a decidedly more action-packed direction with its first current-generation release, Resident Evil 5. Gone were the dark, zombie-infested hallways of mansions in lieu of an expansive adventure across Africa that relied more on gunplay than mood. However, the game’s first of two downloadable chapters, Lost in Nightmares, represents a total throwback to the days when the “master of unlocking” was doing her thing outside of Raccoon City.

You once again play as Chris Redfield, veteran STARS member and current BSAA operative, who finds himself on the trail of the sinister Umbrella Corporation. In keeping with the partner dynamic introduced in the full retail release, Redfield is paired with fellow RE alum Jill Valentine (replacing RE5’s Sheva Alomar) as they infiltrate the residence of Ozwell E. Spencer, who is one of the founders of Umbrella.

The result of this operation was actually shown during Resident Evil 5, so you know who is waiting for you at the end, but before you reach the inevitable conclusion you’ll get to do some exploring of Spencer’s mansion. Long-time fans of the series will definitely enjoy all the little nudges and winks from the designers with things like Jill’s lock-picking prowess and Umbrella’s penchant for cranks being featured heavily. Lost in Nightmares even brings back the old loading screens with the door opening when moving from room to another. It’s total nostalgia.

While being heavy on atmosphere, Lost in Nightmares is a bit light on combat. Yet despite this dearth of enemies the game still offers up a challenge by making the abominations you face big and tough while forcing you to engage them in tight quarters. It can be a nasty combination on the higher difficulties when ammunition is scarce. Also in keeping with the Resident Evil spirit, there are a few puzzles that need to be solved en route to your showdown with Albert Wesker, who is always a tough adversary.

All told the first trip through the mansion should take around an hour depending on how much exploring you feel like doing. Beat it once and you’ll be allowed to play as Jill, though as in Resident Evil 5 two players are able to tackle the mission co-operatively from the beginning. Other little goodies include Score Stars scattered about Lost in Nightmares that can be destroyed for bonus points as well as a new addition to the Mercenaries mode called Mercenaries Reunion, which allows you to play as two new characters: Barry Burton (Resident Evil) and Excella Gionne (Resident Evil 5).

Lost in Nightmares offers a lot of enjoyment for gamers that have embraced the Resident Evil series since inception. It’s a fun ride while it lasts, which unfortunately isn’t that long. In fact, it feels like things end just as the momentum is really picking up. Still, it’s reasonably priced for the content (400 MS Points, $5) and is worth scooping up if a copy of Resident Evil 5 is still in your collection.