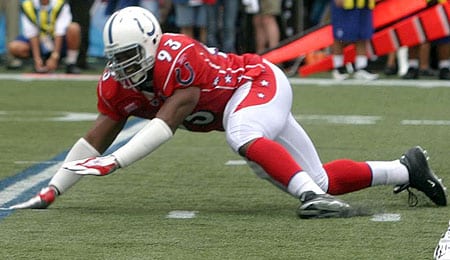 You can worry about whether Dwight Freeney will suit up for the Colts or about which snacks to serve. It’s your call.

We’re down to the final five days, which begs the question: Are you ready for Sunday’s big game?

There seems to be some debate about whether Freeney has a sprained ankle or a torn ligament, and hey, despite the fact that I’m not a real doctor, it’s pretty obvious that’s a big diagnostic difference. I imagine Drew Brees – whose job gets a whole lot easier if Freeney can’t go – is paying plenty of attention to this story.

Where there shouldn’t be any debate is in choosing between pretzels and brownies. Damn, get ‘em both! You can never have enough snacks for the Splendid Bowl. I mean, crap…what’s the worst thing that will happen? You’ll have leftovers? Oh no. Imagine a far more damaging scenario: running out of snacks.

With this in mind, we’re going to bring you the best the web has to offer in terms of Super Bowl snacking advice…oh, and we’ll even toss in a few game previews:

About.com has everything you need to create the ultimate Super Bowl buffet table. Who doesn’t love a freaking buffet? Just don’t stand between me and the table.

Super Bowl Salsa looks like a big winner. You can find out how to prepare this, and plenty of other goodies at Easy Appetizer Recipes. They also include a helpful page for planning your Super Bowl party.

Tristan Sather of Bleacher Report is picking the Saints by three.

Some guy who calls himself Badger, over at Predictem.com, believes the Colts will take this game by four.

Jack Todd of the Montreal Gazette – a paper known for its NFL coverage (uh, ya), says the Colts will win this game by a full touchdown.

Finally, with today being Groundhog Day and all, you’re probably wondering who the rodent picked. Well, wonder no more.

By RotoRob
This entry was posted on Tuesday, February 2nd, 2010 at 8:58 am and is filed under FOOTBALL, RotoRob. You can follow any responses to this entry through the RSS 2.0 feed. You can leave a response, or trackback from your own site.