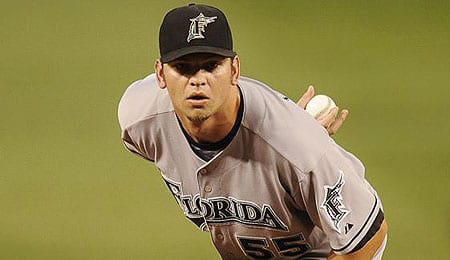 The Marlins opened up their wallet in making a commitment to Josh Johnson.

Last week, we checked in on some of the off-season developments of the New York Mets. Today, let’s take a look at one of their NL East rivals, the Florida Marlins.

The big recent news out of south Florida is the four-year, $39-million deal the team gave to ace Josh Johnson last week. Not only did this conveniently answer criticisms that the Marlins were one of the teams not using their revenue-sharing income to improve their club, but it marked the largest investment the team has ever made to a pitcher.

Johnson is obviously driven to prove he’s worth it, as he’s already gotten a jump on Spring Training, as you can see in this video.

He’s battled injury problems throughout his career, but showed what he can do when healthy in 2009, going 15-5 with an excellent ERA and striking out 191 batters in 209 innings while exhibiting tremendous command. Having just turned 26 on Sunday, there’s plenty of room for growth from Johnson, assuming he can remain healthy. Personally, I have my doubts about his ability to stay healthy, but owners won’t be disappointed with his work while he’s active.

The bullpen was a relative strength last year (well, it performed better than the rotation, at any rate), but the team is working on rebuilding it. Leo Nunez is still the closer, but the bridge to get to him will look different in 2010. Last week, the Fish signed Derrick Turnbow to a minor league deal, and he’ll have a chance to win a job out of Spring Training. Given his battles with elbow problems in the last couple of years that doesn’t sound like a real answer, but consider that his velocity is back up to 93 mph and the Marlins have gotten pretty fortunate in recent years with reliever reclamation projects (see the 2009 seasons of Brendan Donnelly and Kiko Calero).

Calero, a free agent, could still be re-signed, but the Fish have plenty of competition after his career year. The team has already made an offer to Kevin Gregg and is reportedly also looking at Chan Ho Park, Joe Nelson and Seth McClung. Taylor Tankersley, working his way back from elbow problems that cost him all of 2009, will be in the mix as well.

First base is expected to be an open competition. Incumbent Jorge Cantu is back, but prospect Logan Morrison will be given a chance to win the job, as will Gaby Sanchez. Morrison is obviously the long-term answer, but if the Fish are looking to add some pop at this position, they may consider bringing in Russell Branyan as a stopgap solution. He’s still available, and after bashing a career-high 31 dingers last year, Branyan could help transform the Marlins into one of the NL’s more powerful teams.

Over at second base, Dan Uggla was reportedly being shopped, but after the controversy surrounding the revenue-sharing cash, the Marlins have yanked him off the table.

Whether they mean it or not, the Marlins now seem focused on building a winning team that will christen their long-awaited new ballpark in 2012. And by then, outfielder Mike Stanton and third baseman Matt Dominguez – two of the club’s top prospects – will have arrived to supplement an already solid offense that includes NL batting champion Hanley Ramirez (who not only became the first Marlin to win a batting title, but was the first NL shortstop to win one in almost 50 years) and ROY Chris Coghlan (who clinched the award by smacking 113 hits in the second half – tied for the most post-break hits in the last 45 years).

If you’re a Marlin fan, you should be aware that on February 6 at 12:30 p.m. there will be a Hot Stove Report on Fox Sports Florida. The roundtable discussion will feature Fox’s Rich Waltz and Tommy Hutton, Jeff Conine (former Marlin star and current Special Assistant to Team President David Sampson) and team Vice-President/General Manager Michael Hill.

By RotoRob
This entry was posted on Monday, February 1st, 2010 at 11:42 am and is filed under BASEBALL, RotoRob, Team report. You can follow any responses to this entry through the RSS 2.0 feed. You can skip to the end and leave a response. Pinging is currently not allowed.