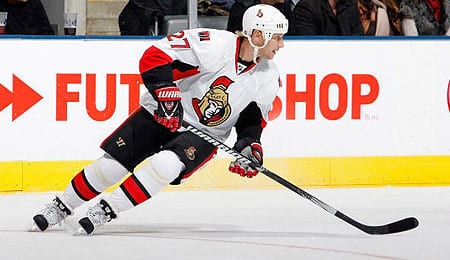 Alexei Kovalev has been among the season’s biggest busts.

This week, the Fantasy Hockey Roundtable was asked: “Which three players have been the most disappointing so far this year?”

Here’s what we said for RotoRob:

2. Alexei Kovalev — His disappearance isn’t surprising, but it is disappointing. Kovalev’s last two seasons in Montreal were great. But with 13 goals in 51 games for Ottawa, he hasn’t lived up to anyone’s expectations. Ottawa had to know Kovalev is one of the game’s streakiest players, but for whatever reason, it chose to throw its lot in with him. A lot of Fantasy owners made the same mistake.

3. Christopher Higgins — He’s never had huge numbers. In fact, his career-high is just 27 goals. But coming to the offense-minded Rangers, it was reasonable to expect Higgins to finally have that breakout season he always seemed to be flirting with. The idea was that he would just hang out in front of opposing nets and collect goals. For whatever reason, that hasn’t happened in New York. And when Higgins does have the rare scoring chance, he can’t cash in. He’s snake-bitten, as you can see with his six goals on the season.

By Steven Ovadia
This entry was posted on Wednesday, February 3rd, 2010 at 11:23 am and is filed under HOCKEY, Roundtable, Steven Ovadia. You can follow any responses to this entry through the RSS 2.0 feed. You can leave a response, or trackback from your own site.