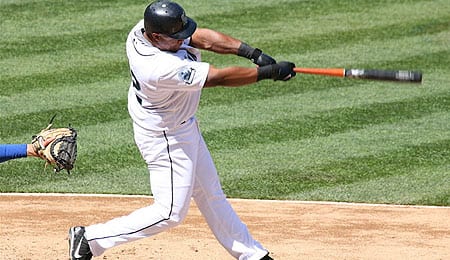 Could Tim be happier? Not only is he into mock draft season, but Adrian Beltre is now with the Red Sox.

Well folks, it’s time to get back into baseball mode. The fowl wasn’t foul, the lights are all down, the tree is stashed for another year, and in a late-Christmas present, Adrian Beltre, the stud third baseman and a personal favourite of mine, has landed in Boston ready to wreak havoc on the Evil Empire. Does it get any better than that, guys?

Bob Sikon from FantasyBaseballTradeMarket.com extended an invitiation to RotoRob to partake in a slow mock draft, and both myself and Todd Habiger took the plunge and what an interesting plunge this one has been so far. The cast of characters and the draft order is as follows:

The first couple of rounds went as expected more or less. Matt Kemp has been a pretty consistent force in the middle of Round One, and the big boppers and five-category studs were in their usual hot demand. There was nothing earth shattering happening here and, as usual, I was looking to a batting strategy, building a strong offense and grabbing my pitching in the mid-to-latter rounds. After taking Mark Teixeira and Jacoby Ellsbury in the first two rounds — a solid start from both a power and speed perspective — I was faced with a conundrum of sorts.

I have always touted an offensive strategy, but when Tim Lincecum was still sitting there for my perusal in Round Three I just couldn’t pass on the potential bargain. It appeared very early on that this draft was filled with a group that had potentially similar strategies, so I needed to adjust my thinking accordingly. Round Four found me looking again at a bat in Joey Votto, someone I’m very big on for 2010. And then the decision that totally shaped my draft happened.

Felix Hernandez was still sitting there at my turn in Round Five. Arguably the best pitcher in the AL in 2009 is still available at this stage? Someone had to take the plunge, so I drank the Kool-Aid and was now officially all-in with a pitching strategy, something I haven’t done since I owned Pedro Martinez and Mike Mussina years ago in an AL-only league.

The following round found me looking at Korean import Shin-Soo Choo, followed up by Adam Jones. Choo and Jones have the potential to combine to deliver 45 homers, 160 RBI and — most importantly — a further 35 stolen bases in conjunction with a solid BA. I need both speed and BA to make my strategy work. In Round Eight it was time to solidify my pitching, so I went with a young stud in Ubaldo Jimenez. I’m very high on Jimenez this year and, combined with Lincecum and Hernandez, I figure to be looking at 45+ wins and 650 strikeouts, to go along with stellar ERA and WHIP numbers. Just what the doctor ordered.

On to Round Nine, and it was time to solidify the speed. And with Michael Bourn still kicking around at this late stage, it was a done deal. The only explanation that makes sense to me for Bourn dropping this far is the plethora of speed heading into 2010. My timing was good on this pick, however, as the speed started to fly off the board, as evidenced by Nyjer Morgan, Nate McLouth, Elvis Andrus, Juan Pierre, Rajai Davis and Denard Span all being taken over the next 15 selections.

In the next round, it was time to find some power for my thus far homer-challenged team, so I went with Jason Kubel of the Twins. This not only gives me some much needed pop with a strong BA, but it also shortens up the outfield considerably. The outfield in the latter rounds is looking a bit lighter than we’ve seen in several years.

Heading into the second half of this mock, my plan is pretty clear. Stolen bases, runs scored, and BA will have to be very strong, something I’ve managed to procure thus far. My pitching has to not be just good, but dominant in every category across the board. Three solid closers will be a key, so this is high on the agenda for my next groups of picks. For this strategy to be effective, I will need 52-to-55 points out of my pitching to go along with 30-to-34 points in the offensive categories. A tough task, but one that I think is plausible.

I’d highly recommend giving this slow mock a look-see as it has been one of the most intriguing I have been involved in — especially from a strategy perspective. Thanks to Bob for thinking of us at RotoRob and including us in the festivities. The full mock can be found here.

By Tim McLeod
Tags: Adrian Beltre
This entry was posted on Monday, January 11th, 2010 at 2:35 pm and is filed under BASEBALL, Mock drafts, Tim McLeod. You can follow any responses to this entry through the RSS 2.0 feed. Both comments and pings are currently closed.