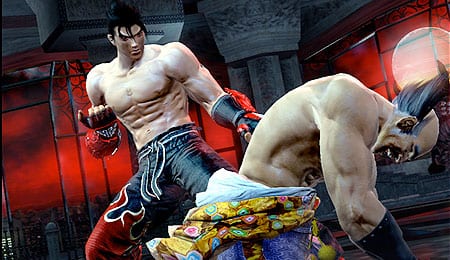 The graphics aren’t earth-shattering, but Tekken 6 makes up for this with an impressive roster of characters and playing modes.

There’s no doubt that Tekken has come a long way since its clunky 3D polygon fighters first debuted on the PSone. After numerous official sequels and an off-shoot Tag Tournament game, gamers know what to expect with Tekken; the trick with each new title is for Namco to add improvements while keeping the essential controls and timing the same. This is where Tekken 6 succeeds. It’s still an acquired taste, but with so many modes and characters to choose from, the game is more robust — and accessible — than ever before.

Namco’s motto must have been “If it ain’t broke, don’t fix it” during Tekken 6 development. If you’ve played the game before, then you know the controls, and that much hasn’t changed. Each face button corresponds to a limb (left and right arms, left and right legs), and the trigger buttons are programmable to combinations suited to your character (e.g., L1 can be right arm/left arm). Movement within the fighting plane is handled by the directional pad, not the analog stick, and true arcade-style fighters can purchase an additional joystick to get a sense of authenticity to their controls.

Crisp and reliable, the basics of Tekken are as solid as ever, though they take getting used to if you’re accustomed to Street Fighter-style buttons. The responsiveness of directional movement depends solely on the character you pick. Some characters move briskly and are based on fast-strike moves while others use more power-based attacks, and movements are adjusted as such. This balance (42 characters — the deepest Tekken roster ever) gives players the freedom to experiment with different styles and speeds, thus providing nearly endless replayability.

Because the controls are so responsive, precise combos can be pulled off with enough practice, and that’s where one of Tekken’s strongest attributes come through. In its customizable practice mode, players can pull up a command list and practice each character’s moves to perfection, either against a static dummy or one that plays like a CPU-controlled opponent. Every character has more than 100 moves or combos, and the trick comes down to the exact timing required to pull off combos. Timing, in fact, has a great deal to do with defense too, as well-timed button or pad presses can get your character out of a jam while falling or when your opponent attempts a hold.

For beginners, the learning curve may be steep, though the very helpful practice mode is willing to hold your hand until you get up to speed. It’s best to stick with one character until you’re comfortable with the general game timing and control scheme; after a few hours, you should have seen enough of the roster that you can select the fighter you want to perfect.

The only area where controls can drag down is when playing online on a lag-plagued connection. Since Tekken requires precise movements, don’t bother playing online unless you know your connection is consistent.

While Tekken’s graphics improve each generation, there’s no comparison to this generation’s leaders such as Metal Gear Solid 4 or Uncharted 2. The models simply aren’t detailed enough, though backgrounds are greatly improved over Tekken 5. Namco has added better lighting effects and background animations (such as helicopters zooming over the fighting arena), along with interactive arena objects (watch the sheep fly when you fight on a Scandinavian hillside). The fight animations are as smooth as ever, especially during the slow-motion replays following rounds. Thanks to the processing power of this generation’s consoles, additional animated details — flowing cloaks, hair movements, and yes, breast jiggling on female characters — have made it into the game.

The game’s audio is essentially the same as previous versions: fight sounds, an announcer, and generic music designed to go along with each arena’s theme. Each character has voiceover, though the lines are so sparse that it doesn’t matter if the delivery is actually good or bad. Character voices are recorded in their native language, so a lot of the post-match smack-talking is done by reading subtitles.

For fight fans, Tekken 6 just might be the perfect combination of roster, styles, and gameplay modes. You can pick one of 40 unique characters to play and starting with offline modes, here are the other modes:

Tekken 6 keeps your statistics, and each win earns you credits for purchasing character customizations (such as Halo-esque armor for Bryan Fury) along with a gradually improving battle rank. Your battle rank starts fresh with each character you play, and there’s a cap on how high you can go playing solely offline.

Playing against the computer may be great for practice, but Tekken 6 truly shines when it creates a virtual arcade for an unlimited amount of unique opponents. The game’s online mode offers two ways to play: ranked matches (for the international Tekken leaderboard) and quick matches (wins and losses don’t affect record). You can also set up custom games and invitations to play against your cross-country college buddies or members of your gaming clan.

With many characters re-appearing after previous games, it’s natural that their move set offers some familiarity. However, Tekken 6 has put in just enough variation that move sets feel like a natural growth or offset of previous games, not exact copies. Old moves are timed differently to create new chain or combo possibilities, and even old standbys like Jin Kazama have new tricks up their sleeve. As for the eight new characters, they fully round out the roster with unique fighting styles to truly give something for everyone.

Because Tekken’s character list and move sets are so diverse, nearly every player has his or her individual style. Thus, even though you may play against Paul Phoenix twice in a row in Tekken 6’s online space, you’re bound to have an entirely different match thanks to the variations in fighting style and skill level. The characters may even look different, as everything from hair to footwear to belt accessories can be customized via purchases with game-earned credits. However, none of the weapon accessories (swords, guns, even a giant fan) affect the game, so there’s no chance that Tekken turns into Soulcalibur.

Your online competition is quite diverse, as Tekken 6 lets you prioritize how matches are made (skill level, location, connection quality), though you might not get your preference depending on who’s currently online. There’s nothing quite as disheartening as taking your measly 2-5 record up against someone with the rank of Marauder and over 1,000 matches played.

While not a giant leap in graphics, Tekken 6 offers the most diverse roster of fighters to date in the series. An in-depth training mode, robust offline mode, and endless online matches make it a fight fan’s dream. With 42 possible characters to learn or play against, the combinations are limitless; tack on online mode against human opponents from all over the world and you’ve got a reason to keep coming back until Tekken 7. If you’ve moved away from the series for a few versions or always hesitated to try it, Tekken 6 is worth it for any fight fan.

By Mike Chen
This entry was posted on Wednesday, January 13th, 2010 at 8:03 am and is filed under Mike Chen, Video Game Reviews. You can follow any responses to this entry through the RSS 2.0 feed. You can skip to the end and leave a response. Pinging is currently not allowed.