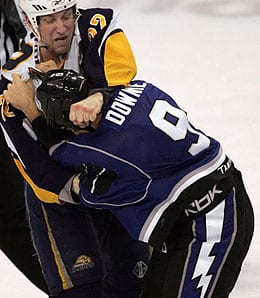 He still racks up the penalties, but Steve Downie is now also getting the points.

People often ask me ‘hey did you see that, or did you go to that game?’ Well, Sunday night was one of those rare instances that I got to see something people do not see very often. This was a resumption of a hockey game that had been suspended because the arena circuit breaker blew. The Devils were nice enough to compensate fans who were at the original game with tickets to another game on top of honouring their tickets to Friday. About 3,500 brave souls went to this “abbreviated” game where the final 29:12 was wrapped up. The Devils were down 3-0 at “halftime” and lost 4-2. They did come close, but as you know, close is not good enough (except in horseshoes and nuclear war).

So what did we learn from this game, that technically lasted a little over two days? Well, quite a bit, honestly. Most Fantasy leagues can have this feeling where the week goes for far longer than it should (or at least it feels that way). Even for me, this week is going to feel like a 10-day marathon, even though I know it’s only seven days. Anytime you play an opponent that you know is superior to you always makes a person feel that way. However, there are some things you can do to ease the pain. There are not that many quick fixes on the waiver wire, but there may be a few that could at least aid in your quest.

Steve Downie, RW, Tampa Bay Lightning: I never thought I would see this day, but it has happened. Downie has some actual Fantasy relevance and not just for fighting. He has nine goals on the season but a surprising five of them have come on the Power Play. Many scouts did say that Downie had a knack for the net and if he could just stay out of the penalty box a bit, he could prove it. Well, now he is. A bonus is that even though Downie’s ATOI is not stuff of legend, at least his 92 PMs are an added assist to your Fantasy hopes. Some will say that he is just two seconds from exploding in the wrong direction, but with waiver wires becoming desolate for talent lately, you could do much worse.

Tom Poti, D, Washington Capitals: Here is another player I did not think would wind up in this column. Out of nowhere, Poti has a five-game point scoring streak and is worth a look in deeper leagues where literally everything is cleaned out. The ice time has also bumped up to an ATOI of 21:11 which is respectable for a Capital defenseman not named Mike Green. Washington has a pretty beneficial schedule and with an offense that is amongst the tops in the league, all Poti really has to do is feed the puck near the net and rack up the assists. Seven points (one goal, six assists) in his last five games is testament to that very fact. You could really steal him cheap as he is owned in only 2-to-3 per cent of all Fantasy leagues.

Miroslav Satan, RW, Boston Bruins: I know this one is a gamble. But Satan was working out all year for an opportunity like this and Boston needs goal scoring. The marriage is perfect really, and as Satan gets in better game shape, the results will start coming. Yes, he only has one goal in his first three games, but the time to pick him up is now. Most owners are kind of asleep at the wheel thinking Satan will not produce, but once Boston gets healthy, everyone knows he will. Do you really want to be left off the boat here? Okay, Satan is no Phil Kessel replacement, he will fill a void on your Fantasy team — especially if it’s decimated by injury.

Now just step back a little and take this all in. Next week, The Wire Troll is going to have some fun help you fish for goalies. With the few that are still left, this could take a while. Good luck this week, everyone. Battle on.

By Chris Wassel
This entry was posted on Monday, January 11th, 2010 at 10:56 am and is filed under Chris Wassel, HOCKEY, The Wire Troll. You can follow any responses to this entry through the RSS 2.0 feed. You can leave a response, or trackback from your own site.