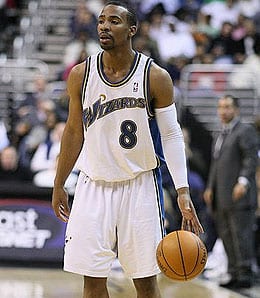 Welcome to the first Wire Troll of 2010. We here at The Troll marveled with the rest of you as the world welcomed the New Year with the traditional – and perennial Troll favourite – fireworks displays. The awesome beauty of these aerial exhibitions is truly a spectacle to behold; nowhere else is such firepower on display – with the possible exception of the Washington Wizards’ locker room. Rimshot, please.

Yes, indeed, Gilbert Arenas’ Fantasy owners – and both of the Bullet…err…Wizards’ loyal fans are watching anxiously as the legal system debates what to do next in the wake of the alleged gunplay between Arenas and Javaris Crittenton. Both players could be subject to heavy fines and/or suspensions; keep in mind that this is Washington, D.C. we’re talking about here, where the Second Amendment has historically been treated as more suggestion than rule. Some of the toughest gun laws in the country could ensnare these players, and bring further discipline from the NBA. Stay tuned.

On the injury front, The Pacers’ Danny Granger is not expected back this week, while teammate Troy Murphy should be back by the time you read this. Ditto for Sacramento’s Tyreke Evans, while fellow King Kevin Martin remains on the shelf. Toronto’s Jose Calderon is still sidelined with no timetable for his return, but Boston’s Paul Pierce figures to be back this week. We’re not sure of the status of Portland’s LaMarcus Aldridge, who’s nursing a sprained ankle – so check up on him before setting your weekly lineup. Equally fuzzy is the status of Denver guard Chauncey Billups, who has missed all or part of the past seven games. Finally, Kevin Garnett is dealing with a knee injury that could cost him a week and a half.

Whether you call it two-thousand ten, twenty ten, or, as some of the Troll’s friends call it, two-oh, one-oh…we’d like to wish you and yours a safe, happy and prosperous New Year.

Roy Hibbert, Indiana Pacers: With Murphy and Jeff Foster watching from the sideline, Hibbert exploded for 25 points, 13 boards and one blocked shot Wednesday, but consistency has eluded the big man all season long. We’re not optimistic about Hibbert’s chances to keep it going once Murph is back on the court (which may be by the time you read this) but even the 10.5 points and 1.5 blocks he averaged in December makes him a marginal Fantasy option in most leagues.

DeJuan Blair, San Antonio Spurs: The burly frontcourt man has found a nice niche in the middle for the Spurs, doing a lot of the rough-and-tumble work under the boards – allowing Tim Duncan to do that pick-and-pop thing he does so well. In the four games he has started – and played more than 24 minutes – Blair has averaged 10.3 points, 8.3 rebounds and 1.3 blocks. Those aren’t great numbers, but his upside – and the fact that the Spurs figure to start resting Duncan more in the second half – make the youngster worth a speculative pickup in leagues with more than 12 teams.

Jeff Pendergraph, Portland Trail Blazers: The Blazers are sorely lacking a big man, and Pendergraph’s minutes have slowly been creeping upward since he made his first appearance of the season December 22. He made it onto the Troll’s long-range radar with a solid eight-point, 14-rebound line – with two blocks to boot – last Wednesday, filling in admirably after Aldridge sprained his ankle in the first quarter. Pendergraph looks like a must-add in deeper leagues while Aldridge is sidelined, and could be an option in standard formats if he earns enough playing time. Don’t forget, Portland’s man in the middle is undersized and over-aged Juwan Howard, so there could be minutes available in the near future.

Kirk Hinrich, Chicago Bulls: Hinrich replaced the slumping John Salmons in the starting lineup December 26, and has averaged nine points, 5.3 rebounds and six assists in that role. Hinrich can score, but the number of available options in Chicago figures to limit his potential in that category. He should be a fine source of dimes at a minimum, and should also contribute at least one trey per outing. Owners in deeper leagues in need of assists should consider adding the Bulls’ veteran, while standard league owners should probably stay their hand until Hinrich gets his scoring touch going.

Rasual Butler, Los Angeles Clippers: Butler is one of those guys who seems to hop on and off the waiver wire several times per season, and right now his shot is definitely falling. He averaged 11.9 points and 1.8 treys per outing during December – while shooting a very serviceable 46.7 per cent. Butler also contributed 0.8 blocks per contest – not a bad showing from your Fantasy two-guard. As always, be ready to cut bait if/when Butler’s shot goes south, but for now he’ll be a helpful reserve in most Fantasy formats.

Nate Robinson, New York Knicks: Apparently Knicks coach Mike D’Antoni made a New Year’s resolution to actually start playing his best players, and re-unleashed Robinson Friday night after a month-long string of DNP-CD’s. KryptoNate responded with 41 points, six rebounds and eight assists, making him once again a must-own player – at least until he runs afoul of his coach again. That could never happen, though, could it?

By Buck Davidson
Tags: Nate Robinson
This entry was posted on Saturday, January 2nd, 2010 at 2:57 pm and is filed under BASKETBALL, Buck Davidson, The Wire Troll. You can follow any responses to this entry through the RSS 2.0 feed. Both comments and pings are currently closed.