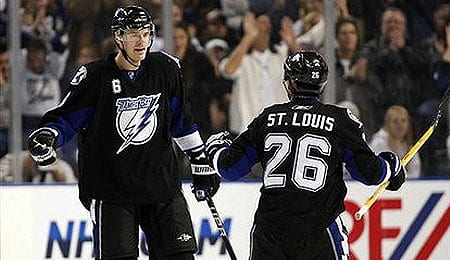 I always figured in the year 2010, hockey pucks would have laser beam trails and giant skating robots would duke it out following a goal. Now that 2010 is here, the only signs we have of those things come from bad flashbacks of the NHL On Fox broadcasts. If you’re not too hung over from your New Year’s Eve/Winter Classic partying, let’s peek in on what some in the hockey world have pledged as their New Year’s Resolutions.

While the Kings got Ryan Smyth back, Justin Williams broke his leg and will be out a significant amount of time. Ryan Getzlaf’s self-inflicted leg laceration isn’t as bad as originally feared and he’ll be day-to-day rather than out several weeks. The Red Wings are hoping that time somehow speeds up, as January sees the projected returns of Henrik Zetterberg, Dan Cleary, Niklas Kronwall, Jason Williams, and Jonathan Ericsson–that’s like a whole new team right there!

By Mike Chen
This entry was posted on Friday, January 1st, 2010 at 1:56 pm and is filed under HOCKEY, Ice Chips, Mike Chen. You can follow any responses to this entry through the RSS 2.0 feed. You can leave a response, or trackback from your own site.