Ace of the Tribe? 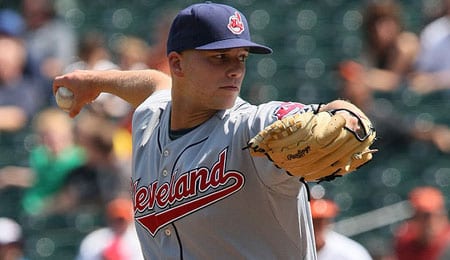 Is this is the new face of the Cleveland rotation?

He’s only made 10 starts for the Cleveland Indians since being acquired at the trade deadline for Victor Martinez, but could Justin Masterson be the team’s ace in 2010?

Considering the current lack of depth in Cleveland’s rotation, it’s a distinct possibility.

After he was moved from the Sox with Nick Hagadone and Bryan Price, Masterson received an immediate Wire Troll recommendation. However, while the 24-year-old righty showed slightly improved control in his swingman role in Boston, he faltered when moved into the Indian rotation.

Masterson was better as a reliever, but given Cleveland’s lack of options, he’ll be needed as a starter. And he could easily be a fixture in that rotation for the next decade.

Expect double-digit wins, a decent ERA, and perhaps more than 150 strikeouts in 2010. Control will be the key for this kid, and I’m anticipating him showing slight improvements in this area in 2010.

Speaking of 2010, Happy New Year to all of our readers!

By RotoRob
This entry was posted on Thursday, December 31st, 2009 at 4:09 pm and is filed under BASEBALL, RotoRob. You can follow any responses to this entry through the RSS 2.0 feed. You can leave a response, or trackback from your own site.