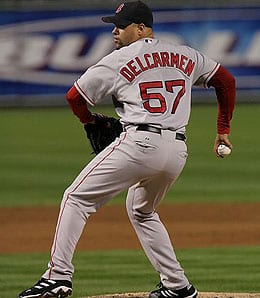 Who is the real Manny Delcarmen?

Manny Delcarmen enjoyed a strong – if fortunate – first half, but as we discussed back in June, things rapidly went downhill for the Red Sox reliever.

Judging by his work in 2007 and 2008, the arbitration eligible Delcarmen definitely has some nice potential, but injury issues, homers and walks really decimated his second half.

The fact that this 27-year-old righty held lefties to a .221 BAA and 659 OPS was very promising, but allowing righties to put up a 936 OPS was unacceptable. Struggles with runners in scoring position and two out was also a real problem for Delcarmen.

He’s supposedly already been shopped this winter and may still be moved, but assuming Delcarmen remains with the Sox, he’ll likely pitch in his sixth or seventh inning role again, a job which would only offer value in very deep AL-only leagues.

As I wondered in the upcoming 2010 Fantasy Baseball Guide, who is the real Manny Delcarmen? The pitcher who enjoyed a 1.82 ERA in the second half of 2008 and followed that up by tossing 14 shutout frames to open 2009, or the one who struggled to a 7.27 ERA after the break last season?

I’m expecting Delcarmen’s ERA to get back into the mid-3s, and his strikeout rate to bounce back closer to what he put up in 2007-08.

By RotoRob
This entry was posted on Tuesday, December 29th, 2009 at 5:21 pm and is filed under BASEBALL, RotoRob. You can follow any responses to this entry through the RSS 2.0 feed. You can skip to the end and leave a response. Pinging is currently not allowed.