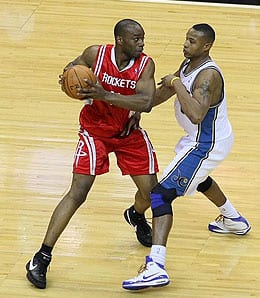 Just how tough is Cool Hand Carl Landry (left), as he’s known to The Troll?

Welcome to the Boxing Day Edition of The Wire Troll. The Troll hopes you and yours had a very Merry Christmas and happy holiday season. In keeping with the frenetic pace that is the Boxing Day shopping/return experience, this week’s Troll will be a rapid-fire affair, so stay with the group and have your credit cards and gift receipts ready, please.

First, some injury news: Celtic Paul Pierce is out two weeks with a knee infection, while Bobcat Tyson Chandler is down for one week with a stress reaction in his foot. Chauncey Billups of Denver is back after struggling with a sore groin, but Joel Przybilla of Portland is done for the season with a ruptured right patella tendon. The Clipper Marcus Camby is day-to-day with a hyperextended knee, but given his extensive injury history, Fantasy owners of the Cambyman should be very concerned.

Both Cool Hand Carl Landry and Disco Dirk Nowitzki are back in action following last week’s gruesome collision, and The Troll sends out a salute to both of these guys – who get paid whether they play or not – for displaying some serious toughness and determination in getting back on the court so soon.

A quick roster note: Sacramento’s Jason Thompson has gained centre eligibility in Yahoo! leagues, so weekly lineup leaguers may want to double-check their roster before setting next week’s lineup.

Nazr Mohammed, Charlotte Bobcats: Mohammed went 12 and nine with a blocked shot in his first start in Chandler’s stead, and should have some short-term value in just about every league. Be ready to cut bait when Chandler makes it back.

Juwan Howard, Portland Trail Blazers: The 36-year-old former Fab Five member takes over as Portland’s starting centre, and he picked up double-doubles in his first two starts. Don’t look for many blocks, and he could lose his gig if Portland trades for a big man, but Howard is worth grabbing in most leagues while he’s starting. Make sure he’s eligible at centre before pulling the trigger.

Andris Biedrins, Golden State Warriors: Biedrins is scheduled to return to the lineup today (Saturday) and should rejoin the starting five soon thereafter. He’s an injury risk, but Biedrins is a fine source of boards and blocks when he’s healthy. Check your wire and grab him if he’s there.

Tyrus Thomas, Chicago Bulls: The enigmatic Thomas may be back on the floor by the time you read this, and his shot-blocking ability could be a major shot in the arm for Fantasy owners willing to take the chance that he’ll stay healthy. Thomas averaged 1.9 blocks, 1.2 steals and 10.9 points a season ago, and should be picked up in all leagues – especially after he proves he’s healthy.

Yi Jianlian, New Jersey Nets: Yi went off for 22 points and eight boards Wednesday in his first game action since November 2. He will almost certainly throw more than his share of clunkers on the board, but he is definitely a buy-low candidate at this point – especially with a Yahoo! ownership of only 35 per cent.

Tony Allen, Boston Celtics: Allen scored 16 points in his first start for Pierce, and makes a fine add in deeper leagues for as long as The Truth is on the shelf. Don’t set the bar too high, but 12-to-15 points and 4-to-6 boards per night seems about right as long as Allen is starting.

Earl Watson, Indiana Pacers: Watson is currently the point guard du jour in Indy, and as such is definitely worth adding in deeper leagues. He piled up 18 points, seven rebounds and six assists Tuesday, and has averaged 5.5 dimes in his four starts this season.

C.J. Miles, Utah Jazz: Miles made his 2009 debut December 4, and re-assumed his starting role December 21, scoring 13 points against Orlando. If you’re in a deep league, Miles is worth adding for his decent three-point shoooting (1.3 per game thus far in ’09), but he doesn’t bring much else to the party.

By Buck Davidson
This entry was posted on Saturday, December 26th, 2009 at 4:28 pm and is filed under BASKETBALL, Buck Davidson, The Wire Troll. You can follow any responses to this entry through the RSS 2.0 feed. You can skip to the end and leave a response. Pinging is currently not allowed.