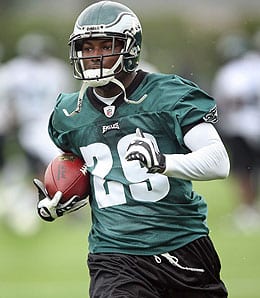 If you have an option beyond LeSean McCoy, this may be the week to use it.

You obviously got this far because you have some sort clue of what is going on in the world of Fantasy football. The fact that the playoffs for Fantasyland occur during such an akward time of the year for the actual teams, it presents a new set of challenges. For instance, will the Colts limit their starters or sit them completely? You rode Peyton Manning all season, but is now the time of year to bench him for someone else?

Let’s take a look at some teams and the situations they are in.

New Orleans Saints (13-1): Despite the fact that the Saints are a win away from locking up home field throughout and a bye, they seem to be leaning towards playing out each game with starters. But, since they lost their undefeated status, they may start to limit reps if in Week 17 if they have nothing to play for. All Saints seem to be a safe play this week against the Tampa Bay Buccaneers.

Minnesota Vikings (11-3): For a team with only three losses, Minnesota seems to have lots of communication issues it needs to iron out. I don’t think going on the road to play the Bears in the cold will help the old man at quarterback. I would not start Brett Favre this week as he has struggled recently in cold weather. You can find at least 10 other guys to start over Favre this week; hopefully you have one on your bench. I think the Vikings try to get Adrian Peterson and the running game tuned up for the playoffs, so he should be a solid play.

Philadelphia Eagles (10-4): The Iggles are trying to catch the Vikings for that first-round bye, so they will be playing all out this week against the Broncos. The problem is that the Bronco pass defense has been quite solid, so I don’t think Donovan McNabb will put up huge numbers, but unless you have another top flight QB, he will be your team’s starter. To further complicate matters, Brian Westbrook may play, but he surely won’t be his normal self. I would not trust LeSean McCoy either, but wide receiver DeSean Jackson is a must-start.

Arizona Cardinals (9-5): The Cardinals have locked up the division and unlikely will snag a first round bye, so they basically have nothing to play for, but they play the Rams this week. Kurt Warner will want to light up his former team, and should have every opportunity to do so. Coach Ken Whisenhut said the starters will play, mostly because the Cardinals could mathematically still get the No. 2 seed. My guess is that starters play this week and rest in Week 17 after the Cards are locked into their seeding. Play Warner and his talented skilled position players.

Indianapolis Colts (14-0): Will they or won’t they? I think the Colts will have this game locked up by halftime. The Jets have been up and down all season, but the Colts are rolling and Mark Sanchez still makes way too many mistakes to keep his Jets alive in this game. The Jets just lost a heartbreaker and may come out slow against the fast starting Colts. If you start Manning this week, you better hope he gets his scores in early, as I doubt he will finish the game.

By Alex Hardin
Tags: fantasy football
This entry was posted on Saturday, December 26th, 2009 at 4:02 pm and is filed under Alex Hardin, FOOTBALL. You can follow any responses to this entry through the RSS 2.0 feed. Both comments and pings are currently closed.