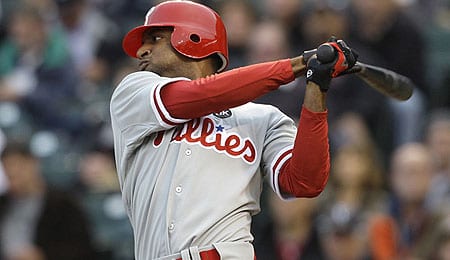 When he wasn’t sitting on the bench, Ben Francisco was doing plenty of swinging for the Phillies.

One of the most important reasons to pay attention to trade rumours is the effect it can have on your players’ values. Obviously, park factors is a large consideration, but the key issue here is what the trade will mean to not only the role of the player being dealt but to the roles of his new and old teammates.

Such was the case this summer when Cliff Lee was dealt to the Phillies for a package of prospects. As a throw in, the Indians sent their starting left fielder, Ben Francisco, to Philly. At the time, Francisco had been tearing it up and was definitely a useful AL-only asset.

However, upon arrival in Philly, Francisco was reduced to a fourth outfielder, thereby killing most, if not all, of his Fantasy value. Being used far more often in pinch-hitting roles, Francisco became much more aggressive – his walk rate plummeted as a Phillie – but his power went up.

While he was on pace to set a career high in at bats this season, the trade to Philadelphia changed that for Francisco. He still wound up reaching 30 doubles and 15 homers for the second straight season, but at the age of 28, there’s very little upside here, and the fact that it’s going to take an injury for him to see enough action to be of interest means that you can now safely ignore Francisco.

Hell, even in the World Series he was an afterthought. He started Game One in New York, shifting Raul Ibanez into the required DH role, but he appeared in just two more games after that, getting just one at bat. When Shane Victorino hurt his hand, it looked like Francisco might take on a bigger role, but Victorino gutted it out, keeping Francisco on the bench – a place he will become quite familiar with in 2010.

By RotoRob
This entry was posted on Monday, December 14th, 2009 at 10:41 am and is filed under BASEBALL, RotoRob. You can follow any responses to this entry through the RSS 2.0 feed. You can leave a response, or trackback from your own site.