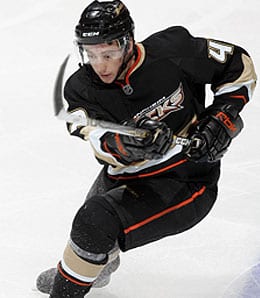 Dan Sexton is one Duck that needs to be plucked off the wire.

As many hockey fans know, this weekend is the start of the Christmas Roster Freeze. Simply put, it means players cannot be moved (via the trade or waiver route) until after December 25. There are players that are probably sitting on your waiver wire and you are mulling whether or not to pluck them. Well, this is a very good question that many are pondering this time of year. Keep in mind that in the case of public leagues, you really (in most cases) do not know who you are playing. However, most times you do know your opponents or have an idea about their strategy. If the latter is the case, then follow this simple mantra: “Be quick or be dead.”

I know this sounds vicious, but it rings true in any Fantasy league. The goal this time of year is to be just that much quicker than your opponent. There is still hope for anyone that is closer to the bottom than the top, as in most cases (in Head-to-Head Leagues), there is about three months to go in the regular season. Think of it this way: Do you really want the top guys to benefit from players you may be able to get that will actually help your team? Personally, I have come back from almost dead last several times to win leagues.

Usually, a hair above .500 can sneak you into a playoff spot. From there, it is an even game. I really do wish more people would realize this. Now, it does not matter if you are in a free or money league…advice is advice. Keep in mind that what we write is only based our own personal experience. There are some who have been in even more wars than I (Darryl Houston Smith, for example). “Black Moses,” as he is called, has proffered this advice to me many a time, and now I am passing it on to you: Take advantage of the holidays in your Fantasy leagues.

It cannot be emphasized further! Jimmy, who had a bit too much to drink, may make a trade with you that is not too outrageous, but may be something he regrets later. Also, you may be able to pick up that guy that no one can get because they are too busy stuffing their faces with food. It does happen — I kid you not.

So now Freeze or Take Off the Waiver Wire

This is the question…time to go over these players three and see what they can or cannot do for thee.

Dan Sexton, RW, Anaheim Ducks: In just three games, Sexton has become a sensation on waiver wires everywhere. Keep in mind he was undrafted, but now this 22-year-old is on a line with Bobby Ryan and Saku Koivu. These are guys that can surely play in the NHL. Clearly, Sexton is there to shoot the puck. He has 18 shots on goal in his last four games (keep in mind he has only played five in total). That may be the only buyer beware with this kid. But five points (four goals, one assist) in five games screams immediate pickup. So what does the jury say on Mr. Sexton? Simple. Take off the waiver wire.

Gilbert Brule, C, Edmonton Oilers: His 3 per cent ownership rate in ESPN, Fantrax, and Yahoo! might scare off people, but he still does have 21 points in 29 games — not half bad. Sure, Brule’s 54 shots on goal could be higher, but have you seen Nik Antropov’s shots on goal? Yes, I thought so. Oh wait, here is the red alert: Brule has no Power Play goals. Uh oh! That can be trouble, especially considering most leagues (last I checked) count PPGs as a major Fantasy category. This becomes a tough one for the jury as I talked to three Fantasy experts. We had one guy say take him and one guy say freeze. I also say freeze; none of his numbers are really that eye-popping, so unless you have a temporary hole to fill, Brule is not really worth it.

Martin Erat, RW, Nashville Predators: The dilemma with Erat is that you never know which Erat you are going to get. He always has those two or three hot flashes a year (and no, I don’t think it’s male menopause). Erat is definitely riding one of those hot streaks now, especially after the hat trick against Vancouver. The problem is he often chills off as fast as he heats up. The four PPGs looks pretty attractive, but realize that two came in the same game. People have picked Erat up as his ownership rate goes anywhere from 7 to 10 per cent right now depending on the site. However, the bottom line still rings true for this guy. He still cannot do this in the NHL consistently. Once you get that rap most times you cannot go back. The jury ruled unanimously: freeze.

Next week we will reveal our three Christmas waiver wire presents that may look not so great on the surface, but with a deeper look can unleash some pretty big dividends. See you then.

By Chris Wassel
This entry was posted on Monday, December 14th, 2009 at 6:12 pm and is filed under Chris Wassel, HOCKEY, The Wire Troll. You can follow any responses to this entry through the RSS 2.0 feed. You can leave a response, or trackback from your own site.