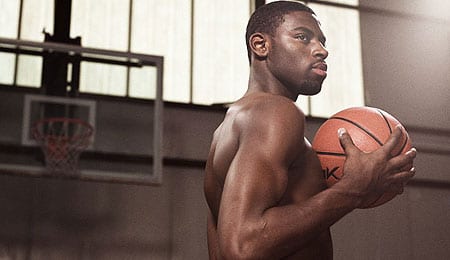 Don’t count Sacramento’s Tyreke Evans out of the NBA ROY discussion yet.

Now that we are roughly a quarter of the way through the regular season, we can start to assess how this class of rookies is performing. From a Fantasy perspective, this may not be as deep as those classes in years past, but there are still a couple studs and a few diamonds in the rough. These rankings are based on my projection of how they can help your Fantasy team for the rest of the 2009-2010 season. If you are in a keeper league, your strategy obviously changes and there may be a few guys to stash that you would not usually have on a one-year team.

1. Brandon Jennings, PG, Milwaukee Bucks: What Jennings has done so far this season is truly amazing considering the scepticism about him on draft day. Clearly, the idea of circumventing getting drafted out of college by going to Europe after high school is a trend that could grow thanks to this test case. He already gets mid-30 minutes and fills the box score with 21 PPG, almost six assists, and four boards per game. But the true test of Jennings’ value can be found in the fact that the Bucks have been a pleasant early season surprise despite the annual injuries to Andrew Bogut and Michael Redd. Jennings has already made good progress in terms of cutting down the turnovers and once he figures out shot selection, he will be an absolute Fantasy stud. Continue to start him even when Redd comes back, as this should be a productive year for the young Buck.

2. Tyreke Evans, PG, Sacramento Kings: His numbers are actually quite similar to Jennings, but Evans does not shoot as well from downtown (especially lately) and does more work on the drive. Coming off his second 30-point effort of the season, Evans is an attractive Fantasy player because he always gets plenty of minutes. He is a future All-Star and you did well if you drafted him this year. Continue to start Evans as he will maintain value throughout the year, although his touches will likely dip once Kevin Martin returns.

3. Stephen Curry, PG, Golden State Warriors: With all the uncertainty surrounding Don Nelson and Warriors, it’s hard to project the value of Curry. But now that team cancer Stephen Jackson is gone, it’s opened up playing time for the rook. Nellie — currently battling pneumonia — is not afraid to throw four guards on the floor so position has little to do with Curry’s PT. He is a player that I see improving dramatically over the course of this season, and you can already see that he’s getting more touches lately. Curry is a nice fill in player for Fantasy owners over the coming months, but he is too inconsistent at this point. He’s getting much more burn in December so far, so now is the time to employ him if for some reason you’ve been waiting.

4. Blake Griffin, PF, Los Angeles Clippers: Even though Griffin has not played yet because of a stress fracture in his left knee), I still think he is a top five rookie for this season – and considering he won’t be back until January, that’s not a glowing review of this draft class. While he was originally expected to miss six weeks, Griffin will end up missing at least half of his rookie campaign. When he does get back, I expect 18 PPG and 9 RPG numbers as the Clip Show — even though they are improved this season — should be tanking towards another lottery pick. Stash the big guy if you can.

5. Jonny Flynn, PG, Minnesota Timberwolves: Although Flynn is a guy that has gotten off to a solid start, I am not convinced that he can help you Fantasy team this season. His shot is not very consistent (although he snapped a slump with a 7-for-12 performance for 16 points on Saturday) and he shoots under 33 per cent from long range. Flynn averages around 14 PPG, but you would like to get more than 3.5 APG from your point guard. On the plus side, as his PT creeps up, Flynn is starting to drop more dimes — he’s averaging 5.7 per game in December. He’s exciting, but he may never be that can’t-miss Fantasy player.

6. James Harden, SG, Oklahoma City Thunder: I see him having some very nice box scores this year (how about that explosion Monday night?), but he will not be consistent enough to place in your weekly starting lineup. Harden is a nice guy to stash on your bench until he gets more comfortable, or the Thunder suffers an injury that opens up time for the former Sun Devil. I am also surprised to see him chuck up so many three pointers, but if he starts to hit them, he could be a categorical asset to your squad. Unfortunately, Harden is really struggling with his perimeter game right now.

7. Omri Casspi, SF, Sacramento Kings: Who? Maybe you should Wikipedia him. Casspi has really impressed the King coaches with his stellar play. He has scored in double digits in seven of the last eight games, which is impressive since he’s been coming off the bench. Sunday, for instance, Casspi poured in 14 points despite battling foul trouble. He’s canned at least one trey in eight of nine games. Casspi is a definitely a guy to monitor and add to your team if you see he is getting more minutes. I have no doubt that he will put up some nice games this year, it’s just a matter of using him at the right time. If an injury opens up playing time, Casspi could be a good fill-in. By the way, how about a big-up for the job the Kings did at the draft in June? Nice results so far!

8. DeJuan Blair, PF, San Antonio Spurs: I am convinced that if Blair played 30 minutes a game, he would average around 14 points and 12 boards. He has long arms to make up for his height restriction at the four spot, and it is clear that he understands how to play basketball. I am not sure how Blair slipped to the second round, but count on the Spurs to once again find a gem, this time at No. 37. If Blair sees more court time this season (and his PT is on the rise), he could fill the stat sheet for your team. You should monitor Blair’s minutes, and take a flier on him if you have an opening.

9. Terrence Williams, SF, New Jersey Nets: T-Will might be having the worst rookie season of any player that averages nearly 10 points and almost five boards. He is shooting a horrible percentage — and it’s getting worse not better — but he is on a bad team that is looking at the lottery next year already. Bad teams play young players, so Williams has a chance to turn it up and have a productive rookie year. I would keep an eye on T-Will as he has potential as a Fantasy fill in. Unfortunately, he’s having a really tough time adjusting to life in the NBA and the frustrations are showing as evidenced by his recent Twitter tirades.

10. Tyler Hansbrough, PF, Indiana Pacers: For some reason, I think Psycho-T will be a close to double-double guy in the NBA just because of his style of play. In a league where half-assing it until the fourth quarter is so common, Hansbrough maintains that college spirit and will just fight and scrap all game. He is just now coming back from injury, so it may take him a while to work his way into the rotation, but the Pacers drafted him to play this year. He could be a Fantasy asset down the stretch, so keep an eye on him. I would definitely like to see Hansbrough start to play more aggressively and earn a few more freebies from the line — that will help him jack his scoring average up quickly.

By Alex Hardin
This entry was posted on Tuesday, December 8th, 2009 at 1:12 pm and is filed under Alex Hardin, BASKETBALL, Rookies. You can follow any responses to this entry through the RSS 2.0 feed. You can leave a response, or trackback from your own site.