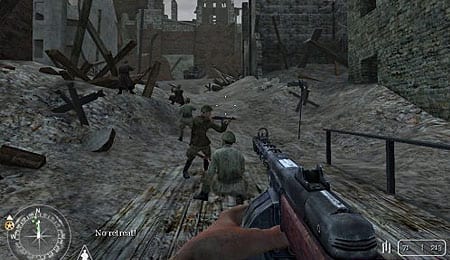 Each and every man under my command owes me one hundred Nazi scalps…and I want my scalps!

While Call of Duty as a whole ranks as one of the defining series on the current generation of consoles, developer Infinity Ward actually launched its initial offering exclusively on PCs back in 2003, and until recently it had remained there. However, with the release of Modern Warfare 2 came a ported version of the original now entitled Call of Duty Classic. It was initially available only to those who purchased the Prestige and Hardened editions of Modern Warfare 2, but it has now been made accessible to everyone via Xbox Live Arcade and PlayStation Network.

Being asked to transition the control scheme from the PC to consoles may not sound like a daunting task for a first-person shooter, but clearly some compromises had to be made, and those that have been playing the Call of Duty series in recent years will find a somewhat less user friendly experience. Thankfully the basics, such as aiming down the sights and firing, remain unchanged with both sticks and triggers performing the same tasks.

Where things start feeling foreign is with the bumpers. In Call of Duty Classic you’ll use them to cycle through your four weapon choices (two rifles, a pistol and a grenade) rather than tossing primary and secondary grenades. This negates your ability to quickly toss grenades while keeping your gun handy and makes it much less of a defensive alternative. Also different is the ability to lean left or right by pressing the d-pad. It definitely felt unnatural to hold down the left trigger to look down the sights and then lean out while still being ready to fire.

You can still melee by clicking down on the right trigger, though it doesn’t seem as accurate or effective. However, the ability to sprint is not included, which made me feel slow and exposed when I tried to move between cover. I also felt the tank controls were really clunky. Even with some changes anyone with first-person shooter experience should adjust quickly.

Yes, Call of Duty Classic is ported from a six-year-old PC game, but given the speed of technological advances in the world of gaming, graphics age in dog years. It isn’t an ugly game per se and you’ll actually see several different areas during the game’s missions. However, you’ll notice most environments are fairly sparse and the player models have some rather unnatural looking animations, particularly when running.

Now while I won’t hold outdated graphics against a game, there are two visual issues that may affect your ability to play successfully at times. First, some of the nighttime missions are incredibly dark no matter what you do with the brightness setting of your television. When your enemies are close it’s not too bad, but when you’re trying to pick off Nazis at a distance it becomes an issue. The other item comes up when firing the mounted machine gun as the burst from the gun takes up so much of the screen you really can’t see what you’re shooting at if you use sustained fire. Even with short bursts it can still be tough to keep track of advancing foes.

On the audio side of the ledger you’ll find a solid effort, though it won’t come close to matching some of the immersive experiences found in more recent titles. The sound effects are good and because there are no blips to indicate where shots were fired you’ll actually need to listen for things like footsteps and dialogue to tip off where the enemies are. There are a couple known actors voicing characters in the game, most notably Jason Statham as Sergeant Waters, and their work along with some nice accompanying music help elevate the overall experience.

Even though the Call of Duty series has grown immensely in terms of production values and popularity over the years, fans will easily spot the basic gameplay elements that have defined the series, albeit on a smaller scale. As usual, you’ll be asked to advance on entrenched adversaries and mow them down with extreme prejudice. It’s a tried and true formula, and despite the enemy A.I. not being up to par with current titles, it’s still cool to see some of Infinity Ward’s groundwork with the series. In fact, one element I actually preferred was the use of the health meter, which makes you weigh your decisions to step into the open more carefully since you don’t automatically heal by simply ducking into cover.

Call of Duty Classic sets you on three separate paths during World War II, allowing you to battle oodles of Nazis as a member of the American, British and Soviet armies. The game consists of more than 20 missions, though none of them are particularly long. Among that group there are definitely some standouts and clunkers with the usual smattering of vehicle-based assignments mixed in. You’ll also be presented with a coherent storyline that ties the missions together while developing characters. To that end, fans of Infinity Ward’s two Modern Warfare titles will see a familiar face along the way.

Most of my beefs with the game have already been noted with the graphical issues, though there are a couple other items worth noting. The biggest is that the game just feels like it’s moving in slow motion at times — an issue that’s exacerbated when you’re trying to cover ground on the battlefield without the benefit of sprinting. I also found myself wandering around trying to find my objective. The worst was on the boat level where I didn’t realize I was supposed to shoot some machinery with my gun and spent 10-to-15 minutes trying to find where to plant the C4. Lastly, there’s no manual save and checkpoints don’t pop up consistently, leading to the maddening scenario of having to replay a large chunk of a level only to see a checkpoint save where it didn’t before.

In addition to a several-hour campaign, Call of Duty Classic is also packed with a full multiplayer. It comes with six basic modes and everyone starts over after each game so there’s no progression involved. The big issue with multiplayer is that it only supports eight players, which leaves the bigger maps feeling sparsely populated. I actually enjoyed the nostalgic gameplay elements, though I wonder how active of a community it will have.

I’m sure the outdated graphics alone will dissuade some from purchasing Call of Duty Classic, and the price tag ($15, 1,200 MS Points) does feel a bit hefty for a ported game. However, the overall experience is fun and long-time fans of the series should enjoy playing the game that started the phenomenon.

By Herija Green
This entry was posted on Monday, December 7th, 2009 at 2:45 pm and is filed under Herija Green, Video Game Reviews. You can follow any responses to this entry through the RSS 2.0 feed. You can skip to the end and leave a response. Pinging is currently not allowed.