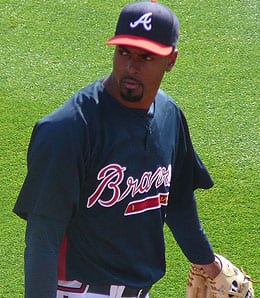 Manny Acosta slipped heavily down the depth chart for the Braves in 2009. (Photo by Chris Nelson)

Can you believe that early in 2008, Manny Acosta was actually earning saves for the Braves? However, he was so substandard this spring that he didn’t even make the team out of Spring Training. Acosta put up some nice numbers at Triple-A, and pitched very well after being recalled to Atlanta in late-May.

However, things went downhill from there.

Acosta struggled after the break (5.40 ERA), and had to be sent back down to Triple-A. He got a September call-up, but was simply too easy to hit by both righties and lefties, and that simply doesn’t bode well for his chances going forward. He may still have some upside, but in his current situation, his Fantasy prospects are grim.

The Braves have upgraded their pen, but Acosta should have a relief role and possibly seem some late-inning action – not that it will come with any value. We’d be shocked to see Acosta be of any use this coming season, so feel free to ignore him.

By RotoRob
This entry was posted on Monday, December 7th, 2009 at 11:04 am and is filed under Another Look, BASEBALL, RotoRob. You can follow any responses to this entry through the RSS 2.0 feed. You can leave a response, or trackback from your own site.