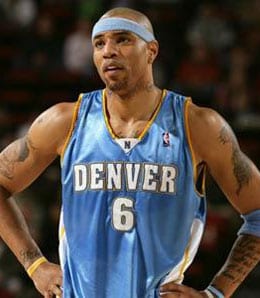 A healthy Kenyon Martin is getting it done for the Nuggets.

Welcome to the Week Seven edition of The Wire Troll. Whereas last week, much of America was celebrating some long-overdue departures – namely that of over-staying holiday relatives, this week it’s all about homecomings. Two big names are back in the Fantasy landscape, while one former stud should be back in action early this week.

While it’s nice to see Allen Iverson comin’ back to Philly, Philly, Philly – and definitely a welcome sight to see the T-Wolves’ Kevin Love yanking boards and taking names again, there was no more beautiful spectacle than that of uber-guard Chris Paul walking back onto the court for the New Orleans Hornets Friday night. All CP3 did in his return was toss in 16 points, dish out 15 dimes and rack up eight – yes, eight – steals. Paul is back and life is again good – unless you own Darren Collison. Obviously, CP3’s return kills Collison’s Fantasy value in most leagues, but the youngster accorded himself very well in Paul’s stead.

Hopefully, those of you playing in daily lineup leagues rushed CP3 back onto the floor in time. Weekly lineup leaguers were almost certainly out of luck…and you guys need to remind me again why this “set and forget” format is an enjoyable way to play the game. Go ahead and get him in your lineup for next week — and maybe use this as a learning experience concerning your league format preference for next season.

A few trade rumours circulating out there involve Andre Miller, whose Fantasy owners would love to see get out of Portland. Also reportedly on the block are Tyrus Thomas, whose athleticism would make him a great fit in several places, and Al Harrington, whose value could fluctuate significantly depending on where he lands.

Kendrick Perkins, Boston Celtics: Coach Doc Rivers recently said of Perkins: “He’s doing all the little things, a lot of the dirty work that you don’t get the credit for.” We at The Troll are down with the dirty stuff, but we’re also digging the stuff you do get credit for – namely the 14.3 points, 9.0 rebounds and 2.0 blocks Perkins has averaged through his first three games in December. Coming on the heels of a solid 11.7/8.1/1.6 line in November – and the fact that his turnovers have decreased markedly of late – the Celts’ big man is appears ready to be rostered in most standard leagues.

Kevin Love, Minnesota Timberwolves: Love made his season debut Friday night, scoring 11 points, yanking down 11 boards and dishing three assists in 24 minutes. Once he shakes off the rust and gets into playing shape, Love should be a solid source of points and rebounds the rest of the season. Keep in mind that he averaged 14 points and 9.6 rebounds per game after the All-Star break last season, so the tools for success are there. The second-year pro should be owned in all Fantasy formats at this point, but his Yahoo! ownership is only at about 70 per cent. Grab him – and hurry.

Kenyon Martin, Denver Nuggets: The oft-injured Martin has been on a pretty good roll all season long, averaging 10.7 points, 7.2 boards, 1.3 steals and 1.4 blocks through his first 18 games. Those blocks and steals indicate his primary Fantasy value, so if you’re a bit thin in those two categories, K-Mart may be worth a look.

Vladimir Radmanovic, Golden State Warriors: He plays for Don Nelson (insert boiler plate Nelson line-up tinkering caveats and profanities here), but Vlad-Rad has seen a nice uptick in production since Stephen Jackson left town. The big man averaged 18.5 points, 2.5 threes, 7.0 rebounds and 2.0 steals his first two games in December. While that’s a small sample size – and he does play for Nellie – Radmanovic’s unique combination of points, boards and treys makes him definitely worth a look in deeper leagues.

Yi Jianlian, New Jersey Nets: Yi is expected back this week, and deep leaguers should definitely give the big man a look. He was off to a decent start before his knee injury, averaging 9.7 points, 7.5 boards and 1.3 blocks through three games. If he can avoid injury (a big “if” to be sure), Yi has shown the ability to produce solid numbers. Managers in standard-sized league should hold off until he is back in the rotation, but the Net forward is certainly a lottery ticket worth buying.

Wesley Matthews, Utah Jazz: It’s hard to know what to make of it, but Matthews threw in 17 and 18 points last Thursday and Friday. He has held down the starting job for three weeks now, and may be on the verge of becoming a Fantasy contributor in deeper leagues. If you’re in one of those league of 14 team or more, Matthews is worth a speculative pickup – just in case his recent mini-outburst isn’t an illusion.

Allen Iverson, Philadelphia 76ers: Iverson’s Yahoo! ownership jumped from around 30 per cent to almost 80 per cent last week, and hopefully Wire Troll readers hopped on that train before it left the station – on its way back to Philly, Philly, Philly. The Answer is slated to make his debut Monday, and we see some good things ahead for both the Sixers and AI. AI2, on the other hand, might see a bit of a drop in production, as the Philly offense will now run through Iverson rather than Andre Iguodala. Stay tuned for what happens when injured point guard and budding star Lou Williams makes it back in about six weeks. Oh, the drama.

Chris Duhon, New York Knicks: Duhon has been in an epic shooting slump since the beginning of the season, but recently he has shown signs of emerging from his funk. He has posted a stellar 50 per cent from the floor through three games in December, while averaging 12.7 points, 2.3 treys and 5.7 dimes. The caveat here is that most of those numbers came from the dominant 25-point, 10-assist night he posted on Friday. That being said, Duhon has been a fine source of assists despite his shooting woes, and the fact that his shooting touch may be returning makes him worth a speculative grab while he’s available in about half of Yahoo! leagues.

By Buck Davidson
This entry was posted on Sunday, December 6th, 2009 at 11:44 am and is filed under BASKETBALL, Buck Davidson, The Wire Troll. You can follow any responses to this entry through the RSS 2.0 feed. You can leave a response, or trackback from your own site.