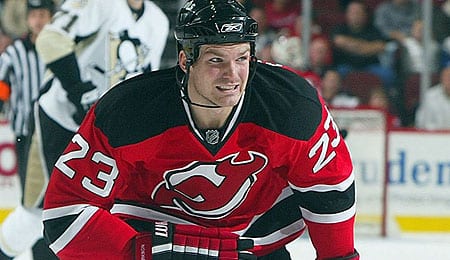 David Clarkson looked like the roto surprise of the season until he got hurt. (NewJerseyDevils.com)

This week we asked our illustrious panel “Who was your waiver pick up of the week?” Here’s what they told us:

This season David Clarkson had been the roto surprise player of the year before his recent injury. This title was held by David Backes last season who started off the year with four points and 34 PIMs in his first 21 games. His pace through 21 games was 16 points and 133 PIMs, which was far behind last years total of 54 points and 165 PIMs. With six points and four PIMs in his last four games, Backes looks to have turned the corner and he could break the 45-point and 150-PIM barriers again. His RW status is also bonus as it is the hardest position to fill.

This wasn’t my most active week on the waiver wire among my seven Fantasy teams, but I’ll mention one player that I added who is probably drawing a lot of attention in leagues right now. Nashville’s David Legwand, who was probably on most leagues’ waiver wires after being held without a point in his first seven games and without a goal for the entire month of October. November has been a different story for the 1998 second overall pick, as his success (11 points in 13 games) parallels the recent success of his team. Legwand and the Predators were shut out 5-0 by the Flames on Monday, so his five-game point streak was snapped. I will roll with Legwand for a little while, but I won’t hesitate to drop him if he experiences another deep freeze similar to October’s.

My waiver pick of the week is Montreal Canadien defenseman Marc-Andre Bergeron. His attitude has always been the concern, and he didn’t have a team coming into the season. But Bergeron has shown the ability to put the puck in the net – he has scored at least 14 goals three times, including last year with Minnesota. The Canadiens signed him two weeks into the season, so no one drafted him, and he has already put up three big scoring weeks. Bergeron picked up five goals already this year, and is getting significant action on the power play, having lit the lamp twice with the man advantage thus far. He’s a solid third or fourth defenseman, but at this point in the season, I’ll gladly take that kind of production from a waiver wire guy who is slotted in as my third blueliner.

As for me, I decided to go for the super longshot and grab Mike Rupp from the Penguins, after he put up a hat trick against the porous Rangers Monday night. Rupp has never had a double-digit goal season; in fact, he has just two seasons with more than 10 points. But 28 games into the season, he’s already got a career-high eight goals. Rupp seems confident and I’m gambling he might see some more ice time in significant situations. I don’t think he’s going to be a huge goal-scorer, but he seemed like a relatively fun way to try and steal a few points in my league.

By Steven Ovadia
This entry was posted on Saturday, December 5th, 2009 at 1:11 pm and is filed under HOCKEY, Roundtable, Steven Ovadia. You can follow any responses to this entry through the RSS 2.0 feed. You can skip to the end and leave a response. Pinging is currently not allowed.