The Wire Troll: Some Leftovers 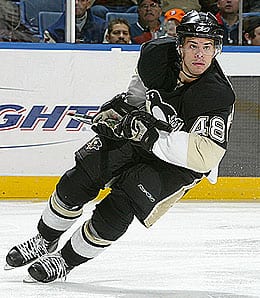 Tyler Kennedy is scoring plenty of goals and he could be available in your league.

It comes to that time of year where we leave Thanksgiving and head towards Christmas. With eight Fantasy weeks in the books, it also gets down to that time where you have a pretty good idea of what your team is, what it is not, and maybe what it can be. Unless, of course, you have not been paying attention to your Fantasy hockey teams. The key is just to do a diagnostic check, if you will.

This week we are going to take a look at three players that might be able to give your team a better outlook or, in some cases, a new lease on life. Keep in mind that the Christmas Roster Freeze is a little over three weeks away. There may be some movement by then that also can make an impact. Now, here are their stories.

Tyler Kennedy, C, Pittsburgh Penguins: Sure, he is the fourth-line centre, but he packs some pop on the offensive end. The six goals in 13 games is a total steal and if you can dismiss the Average Time On Ice category in some leagues then you are enjoying a nice little gold mine with the guy that really sparks this Penguin team. The ownership rates fluctuate from league to league with Kennedy. ESPN has him around 70 per cent owned while Yahoo! has him around 60 per cent, but some leagues have him at less than 50 per cent. All leagues have seen double-digit rises in his ownership rate since his return which means you should go get him now.

Anton Stralman, D, Columbus Blue Jackets: I somehow think people are not paying attention here, but quietly Stralman has 15 points on the season. I know about the -8, but his playing time is increasing and that +/- was in double digits for awhile there, but it’s improved. Oh and it does not hurt that Stralman is on the first power play unit with none other than Rick Nash. That will help your Fantasy value — all four of his goals are on the man advantage. So with the 20:05 average ice time and 40 shots on goal, it may be a great time to get Stralman while his ownership rate is only — yes only — in single digits. Buy in while you can!

Trent Hunter, RW, New York Islanders: Somehow I will take some heat for this, but the guy is producing at nearly a point a game rate (11 points in 12 games). Now, Hunter has been playing with some pretty good talent (Kyle Okposo, John Tavares and Matt Moulson), but he is a solid team guy who can put pucks in the net as evidenced by his five goals. Right now, he is owned in only 3 per cent of all Fantasy leagues and that is up two percentage points in the last week. I am thinking some more people could find a home for this talented right winger at some point. Don’t you think so?

For the dearly departed, we have two players this week that shall go to rest for the remainder of the season on the waiver wire. They shall never be picked up on teams again.

David Jones, RW, Colorado Avalanche: It was sad to see him go, but a torn ACL spells the end of Jones’ 2009-10 campaign. His scoring (10 goals) will be sorely missed by a Colorado team that is losing its way in degrees. Jones will miss the next four-to-six months while he rehabs his knee and it’s strange to think that just Saturday morning I was singing his praises and by the end of that night he was getting ready for surgery. Something truly wicked this way comes, as they say.

Ales Hemsky, RW, Edmonton Oilers: This is another sad case as he’s a player who performs really well for Fantasy teams and is very important to his team. Hemsky provided more than just scoring, as he also was a good leader and solid all around team player. He will be dearly missed by his teammates and fans alike as shoulder surgery will keep him out for the rest of the season. See you in October 2010, sir.

Next week in The Wire Troll, we will dig even deeper and take a look at some returning players. See you later!

By Chris Wassel
Tags: Pittsburgh Penguins, Tyler Kennedy
This entry was posted on Monday, November 30th, 2009 at 7:02 pm and is filed under Chris Wassel, HOCKEY, The Wire Troll. You can follow any responses to this entry through the RSS 2.0 feed. Both comments and pings are currently closed.