NBA Today: Close, But No Cigar for Knicks 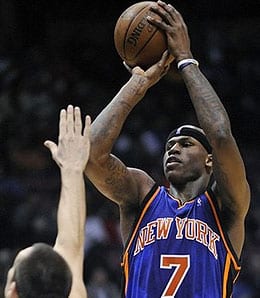 Let’s give the New York Knicks some props for the their effort Friday night in Denver – a very tough place to win. I mean, hell, the Nuggets haven’t dropped a home game since March 9.

Despite the offensive bonanza from the Knickerbockers, promising youngster Danilo Gallinari barely made a dent in the scoresheet. Of course, the fact that he played less than 18 minutes had much to do with that.

But the kid just couldn’t get it going, and with Al Harrington coming off the bench and going off for 41 points – just one shy of his career best – Gallinari saw plenty of pine time. He hit just 2-of-10 from the field and is now in a 9-for-29 funk over the past three games. There’s been talk that he may lose his starting job — Harrington started the second half on Wednesday night — but Gallinari remains the starter. After this stinker, Coach Mike D’Antoni may rethink that.

This is the dude that was traded for Caron Butler in my league?

Gallinari missed all four of his tries from downtown, marking only the second time he’s failed to nail a 3-ball this season.

The Italian-born forward is getting dropped in plenty of leagues recently, and if you’re holding your own in 3PM, you may want to consider doing the same if you wanted to target a hot pick up like Chris Douglas-Roberts or Anthony Morrow.

By RotoRob
This entry was posted on Saturday, November 28th, 2009 at 11:01 am and is filed under BASKETBALL, NBA Today, RotoRob. You can follow any responses to this entry through the RSS 2.0 feed. You can skip to the end and leave a response. Pinging is currently not allowed.