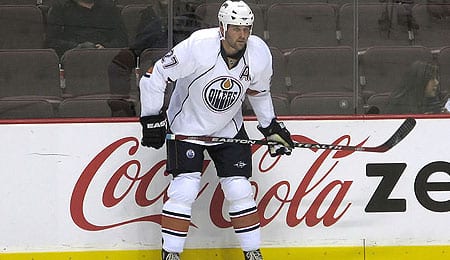 Fantasy owners have to be extremely thankful for Dustin Penner.

Greetings and sorry for the lateness…but The Wire Troll goes on this week. It has been a strange time lately to say the least, and there are also only a few days until Thanksgiving. I always have much to be thankful for. One thing is I am able to do this column on a weekly basis [Editor’s note: Aww, Chris…no need to suck up to me!]. Also, it does not hurt that I am a little more healthy than last week. It was not so much that I was sick, but that so many family and friends were — I never thought I would have to disinfect a computer. These are some of the more odd things that you may have to deal with this time of year.

Alas, now it really is time to see which players I have been thankful for on my teams. One or two of these guys may even still be available in your league. I saw a lot of players that are still on waiver wires that should not be this weekend. Maybe a blue light special from K-Mart is needed for everyone to alert them to the potential feast that is just waiting for them if only they would take a look.

Time to take that peak, ladies and gentlemen…

Dustin Penner, LW, Edmonton Oilers: Obviously Penner is not available in many leagues, but on ESPN he is listed as being available in 3.2 per cent of leagues. That is about one in every 32 or 33. It is not the 25 points or the +11 even that is the biggest surprise for Penner owners. It has to be the four PPGs and 77 shots on goal. These were things we never thought we would see in Penner again after Craig MacTavish played mind games with him. Yet under head coach Pat Quinn and assistant coach Tom Renney, Penner is not only earning his keep, but he is in the top 10 in scoring. I picked him up off waivers during the first week and have rode him to glory ever since. With Penner’s confidence at an all-time high, do not expect him to really cool off all that much. Add in the 20 minutes of ice time he’s getting per game and good times are still ahead.

Lubomir Visnovsky, D, Edmonton Oilers: Visnovsky has been lost in the shuffle a bit and riddled with injuries the past couple seasons. However, he is turning it around which is great for Fantasy owners. Visnovsky now has 16 points this season and is getting back to the type of production he put up in his days with the Los Angeles Kings. He is still only owned in about 60 per cent of leagues (Yahoo!, Fantrax, ESPN). Even PoolExpert has him down around 55 per cent ownership. Is Visnovsky benefiting a bit from the health issues of Sheldon Souray? Absolutely. On the other hand, he is racking up the points at almost one per game over that last 10 contests. Visnovsky may be 100 per cent healthy for the first time in two seasons, so it may be wise for you to go pick him up now as I have seen double-digit percentage point rises in his ownership the last two weeks. People are catching on. You should now as well.

Nik Antropov, C, Atlanta Thrashers: Antropov is another player that many did not know what quite to expect from. He has potential, but as one friend said to me, “He is so streaky that you wonder if a trail was left in his pants.” Maybe that’s a little graphic, but that is Antropov’s reputation. He did that in Toronto and in his short stay in New York. The funny thing is Antropov was more of a goal scorer, but now he has transformed into a poor man’s Joe Thornton…sort of. Antropov has 20 points in 20 games but, oddly, 19 of them are assists. He only has one goal, which I am sure drives many Fantasy owners batty, but he is still racking up points. Sometimes you take them anyway you can get them. The only concern is that Antropov has only taken 22 shots on goal in 20 games. He has an above average slapper, so he needs to start converting as opponents will take away the pass as time goes on. But so far, Antropov has been a nice fantasy surprise with the sixth-highest total of assists in the NHL.

Andy Greene, D, New Jersey Devils: So you were looking for a guy who could rack up minutes on D and could not find one. Well I found one and so are other Fantasy GMs out there. Look, Greene is not going to rack up points but he does have three Power Play tallies and since the injuries to Paul Martin and Johnny Oduya, he has played almost 25 minutes a night for New Jersey. Greene generates about 1.3 shots per game, which is better than most Devil defensemen. His ownership rate is around 20 per cent, but considering it was less than 3 per cent two weeks ago, that is a major increase. Even when the other players come back for New Jersey, Greene will see the ice time because he plays more within himself than the rest.

On behalf of my family and I, I’d like to wish all our American readers a Happy Thanksgiving. See you next week when we examine some of the leftovers on The Wire Troll. Until then, happy trails.

By Chris Wassel
This entry was posted on Monday, November 23rd, 2009 at 12:52 pm and is filed under Chris Wassel, HOCKEY, The Wire Troll. You can follow any responses to this entry through the RSS 2.0 feed. You can leave a response, or trackback from your own site.