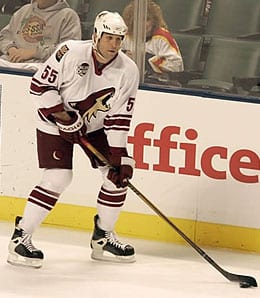 Ed Jovanovski has been reborn under Dave Tippet’s system.

This week’s Fantasy Hockey Roundtable asked “Outside of Michael Del Zotto, which defensemen have surprised you the most this year?”

Speaking for RotoRob, I weighed in:

So far this season, I’ve been most surprised by Phoenix’s Ed Jovanovski.

Jovo finished last season with just 36 points in 82 games. It was a decidedly disappointing season for him and I expected it to continue. But this season, he has 13 points in his first 16 games and a 15-goal campaign doesn’t seem out of reach.

What’s different? Playing for coach Dave Tippett, the new head man in the desert. Tippett plays a defensive system that leaves a lot of chances for blueliners to blast away from the point. And Jovanovski is taking advantage of the constant green light from the point. It worked for Sergei Zubov when Tippett coached him in Dallas and it’s working for Jovanovski in ‘Zona.

For the rest of this week’s Roundtable, visit FantasyPros911.

By Steven Ovadia
This entry was posted on Monday, November 23rd, 2009 at 11:42 am and is filed under HOCKEY, Roundtable, Steven Ovadia. You can follow any responses to this entry through the RSS 2.0 feed. You can leave a response, or trackback from your own site.