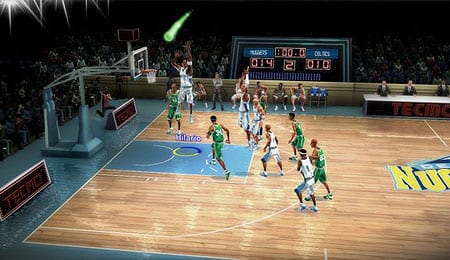 Looking back at my childhood from a gaming perspective, I would single out three titles that really defined it. The first two were Nintendo creations Super Mario Brothers and The Legend of Zelda, while the third was a little game called Tecmo Bowl. To this day, I distinctly remember waking up early one Christmas morning and playing most of a season waiting for it to get late enough to roust my parents in anticipation of Tecmo Super Bowl being under the tree.

That love for Tecmo’s brand of sports titles coupled with my insatiable basketball jones had me looking forward to some combination of Tecmo Super Basketball, NBA Street and NBA Jam awaiting me when I downloaded NBA Unrivaled. What I found instead was a game suffering from something of an identity crisis.

The controls for NBA Unrivaled are pretty basic on both offense and defense. When you’ve got the ball, you have the option to pass (A), shoot (X) and pull off a juke move (B). Flip things around and you can attempt a block (X), steal (B) or switch players (A) while trying to contain your opponent. You’ll also have access to turbo (right trigger) with or without the rock.

About the only complex move comes when taking control of a player off the ball (press the left trigger) and moving them while the man with the ball remains stationary. This is how you pull off alley-oops in theory, but in practice I found my player would get ripped almost the second I took control of someone else to set up the dunk. It didn’t matter where I engaged the “give and go” controls, my defender always knew immediately and was all over me.

You’ll also find shooting tough with nothing to provide guidance for when you’re supposed to release the button. I emailed Tecmo and it told me to release at the peak of the jump, which helped, but I still felt too many open jump shots failed to connect, particularly beyond the arc. I was told a title update would be forthcoming to increase three-point accuracy, which is a good decision.

Passing can be sketchy also, as the ball does not always go to who you intend. It’s a common problem even in full retail hoops titles, but the difference is they offer the option of icon passing, which is not available here.

NBA Unrivaled allows for a little strategy as well, offering the opportunity to call four different offensive and defensive sets using the d-pad. It helps mix things up offensively, though on defense I felt compelled to play man-to-man because the players seemed to stand around too much when I switched to zone.

What you think about the visuals in NBA Unrivaled will depend greatly on whether or not you embrace the artistic rendering of the players. Realism is thrown out the window here in favour of a stylized, almost anime-inspired look. I fell somewhere in the middle as the angular characters definitely lend the game some personality and help to differentiate it from other titles. However, the representations are hit or miss (check out Joakim Noah) and they’re just not that crisply reproduced, failing to measure up with some other recent Xbox Live Arcade offerings. The menus and court itself look good, and the cut scene dunks are pretty cool.

While the graphics could at least be considered solid, the animation is where the game really struggles with players jerking and jittering all over the place. It isn’t bad when there’s some spacing on the court, but since so many CPU possessions end up with most of the 10 players inside the three-point line, things get muddled too often. Plus, when this happens it becomes nearly impossible to follow the ball, leaving you to either mash the B button in hopes of getting a steal or moving your player away from the scrum until you can locate the rock again. The other area of concern is the camera, which sits too low and exacerbates the issue of players clustering up because you don’t get a good enough sense of the vertical spacing of the court.

While NBA Unrivaled has some redeeming features visually, the audio portion has been almost ignored. Outside of a decent ditty found in the main menu, you’re given a short, repetitive and ultra simplistic loop during gameplay. This is only broken up during special sequences with an upbeat little tune before reverting back to the old melody. There’s no commentary, and the announcer only says things like “Two,” when you make a two-pointer, or “Foul.”

The biggest issue facing NBA Unrivaled is that it tries to market itself as an arcade game, but it actually favours a more deliberate pace. In fact, the only thing that screams arcade is the gravity defying dunks. The on-court action is slow, you’re playing a regulation five-on-five game with substitutions and there’s a referee you’ll see far too often whistling charging and reaching-in fouls. It’s like they decided to dip their toe into the arcade waters without taking the plunge.

In terms of the A.I., it’s very reminiscent of the bygone days where the CPU would unnaturally crank up the difficulty when trailing. At times the CPU will just stand around on defense and offer little resistance. At others times, it will be all over you, seemingly swiping every other pass you throw. The CPU also does a lot of rapid passing, which leads to the ball becoming nearly impossible to track. With 10 players on the court it just becomes congested, and the quick charging whistle punishes you for being frantic, which again goes against what you’d expect from an “arcade” experience.

Even with its faults, NBA Unrivaled is hardly devoid of fun. Once you get the hang of the game’s pacing and an improved feel for when to release your jump shot, there’s a certain throwback charm to be found along with a definite nostalgic feel. The momentum meter is a cool feature that adds some weight to each possession, rewarding consistent scoring and stealing of the ball with “Momentum Mania,” which grants your players temporary skill boosts. It helps create an ebb and flow to the game.

NBA Unrivaled is pretty lean on gameplay options, however, featuring only a challenge mode, quick play and Xbox Live support. The challenge mode serves as the primary single-player option. Here you’ll select a squad and proceed to square off against the other 29 teams one after the other in the same sort of progression ladder we saw in NBA Jam. Quick play supports one or two players and allows you to do things like turn off fouls and fatigue as well as choose the quarter length.

The online community is disturbingly sparse, though I did play several matches and found them to be full of glitches and missing animations. Players would skid across the court and even vanish. Time would stop with a player running in place and then suddenly start up again. Lots of little items like that. Things ran a little smoother when I was the host and invited another player to a game, but there were still a lot of hiccups in the way the game ran. Despite the issues I did enjoy some of my online matches.

The game features 10-man rosters for each team with all 300 players rated in six areas. For the most part, the rosters are respectable, but there are some notable omissions. Perhaps the most egregious is that early Rookie of the Year favourite Brandon Jennings has been left out in favour of Roko Ukic. You’ll also note that impact rookies like Chase Budinger and Toney Douglas are missing as well. In Douglas’ case, it’s Cuttino Mobley on the Knicks instead — yes, the same Mobley who never played a minute with the Knicks and retired nearly a year ago.

One last item that should be mentioned is the cost (1,200 MS points, $15). By choosing that price point, you invite comparisons in terms of value between NBA Unrivaled and other $15 XBLA games like Shadow Complex, Battlefield 1943 and Castle Crashers. Those were completely original properties that pushed the envelope for how downloadable titles were viewed, something NBA Unrivaled is not.

If you didn’t grow up playing games like Double Dribble or NBA Jam you probably aren’t going to appreciate what NBA Unrivaled was attempting to recreate. However, even those that did may be dissuaded by the high price tag. Ultimately NBA Unrivaled is a reasonably fun, albeit flawed, experience that is asking too much buck for too little bang.

By Herija Green
This entry was posted on Tuesday, November 24th, 2009 at 11:38 am and is filed under BASKETBALL, Herija Green, Video Game Reviews. You can follow any responses to this entry through the RSS 2.0 feed. You can leave a response, or trackback from your own site.