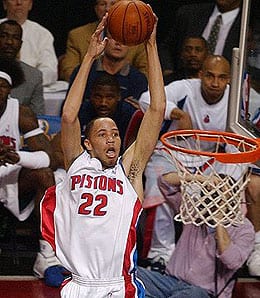 Thanks to a wonky back, normally durable Tayshaun Prince could be out a long time, and surgery is a possibility.

Welcome to the Week Three edition of The Wire Troll, our weekly look at players who may be available on your league waiver wire but could see a spike in their Fantasy value in the immediate future.
This past week, injury news ruled the landscape, and the players involved ranged from the shocking (Tayshaun Prince of Detroit saw his streak of 496 consecutive games come to an end) to the utterly predictable (Kevin Martin of Sacramento, Devin Harris of New Jersey and Michael Redd of Milwaukee…you didn’t really blow a high draft pick on any of the Gossamer Guards, did you?)

Redd will be reportedly miss two weeks with a strained patellar tendon in his knee, while Harris may miss another three weeks with his groin injury. K-Mart underwent surgery on his wrist and will be out 6-to-8 weeks, but at least there’s a reasonably good chance he won’t get hurt off the court.

The same cannot be said for Chicago’s Tyrus Thomas, who fractured his arm while weightlifting and is down for 4-to-6 weeks. Another notable injured star is Troy Murphy of Indiana, whose back injury was reportedly so bad he couldn’t tie his shoes (guess they wouldn’t let Murph play barefoot). Meanwhile, Vince Carter of Orlando is still trying to get back in the lineup after suffering a sprained ankle back on October 30.

Murphy, Carter, Prince and the Knicks’ Nate Robinson are all expected back this week – though all are risky plays in weekly lineup leagues. Bench Murphy, whose Pacers only play twice anyway. Weekly leaguers will again have to muddle through without Orlando’s Rashard Lewis (suspension), but they will have access to the long-range bombing (and maddening inconsistency) that is Denver’s J.R. Smith, who should be back in action following his seven-game ban. Smith is not a recommended play until he shakes off the inevitable rust.

Though we have a whole new slate of potential waiver wire grabs for you this week, don’t forget to review our picks from the first Wire Troll of the season, as many of those players could provide some value if they’re still languishing on the wire.

Roy Hibbert, Indiana Pacers: Hibbert was a popular sleeper pick after his stellar pre-season performance, but the seven-footer was slow out of the gate when the games started to count. Many Fantasy owners were quick – too quick – to cut bait, and now you can take advantage. Hibbert racked up three straight double-doubles – along with 11 blocks – November 3, 4 and 6, and could be poised to deliver on the promise he showed back in late October. He is owned in roughly half of Yahoo! leagues, but that number is sure to grow if he continues scoring, boarding and blocking at his current rate. Add the big fellow immediately; he looks like he has found his comfort zone and should be helpful in just about every Fantasy league at this point.

Oleksiy Pecherov, Minnesota Timberwolves: Pecherov has stepped into Kevin Love’s big shoes and is faring quite nicely, thank you – averaging 15 points and 6.3 rebounds through his first three starts of the season. Don’t over-invest here: Love is talking about returning from his broken hand November 20, and Pecherov’s NBA track record is not impressive. However, if you’re in a deeper league you could do a lot worse than Pecherov in the short term.

Erick Dampier, Dallas Mavericks: Yes, you read that right; the man once referred to as the best pick-setter in the NBA (yee-haw!) has actually become Fantasy-relevant. With Drew Gooden nursing a strained rib cage muscle, ED is seeing big minutes and putting up strong numbers. Dampier has always been a good shot blocker, but he was averaging nearly a double-double through his first five games of the season – to go with 14 blocks. It remains to be see how long Dampier’s body can withstand 30-plus minutes per night, and he’s sure to lose playing time when Gooden returns – but for now Dampier is a good short-term add if you’re in need of boards and blocks (or picks).

Chris Douglas-Roberts, New Jersey Nets:  Douglas-Roberts looks to have taken over as the top scoring threat in Jersey now that Harris is on the shelf. Harris may be out for as long as three more weeks, so the time is definitely right to grab CDR. He tossed in 25, 20 and 19 points in consecutive games after Harris went down, so it’s clear that the Nets will look to their swingman to be Mr. Outside to Brook Lopez’s Mr. Inside. Douglas-Roberts is worth rostering in just about every Fantasy league while Harris is sidelined, and he has enough upside to possibly be a season-long member of your squad. He’s battling a case of the flu at the moment, so weekly lineup players may want to stay their hand until CDR is confirmed healthy.

Andres Nocioni, Sacramento Kings: Oops – Just a few hours after logging 14 points and six rebounds in his first start of the season, Nocioni was busted for suspicion of DUI. It’s doubtful that he’ll miss much – if any – time, though, and the fact remains that he’s now the Kings’ starter at small forward. The injury to Martin (Martin? Injured? Wow – who knew?) opens the door for someone to take over as the top scorer in Sac Town, and Nocioni has never been shy about taking a shot. Add Nocioni in deeper leagues, and be prepared to add him in all formats if he goes on a hot streak.

Matt Barnes, Orlando Magic: Barnes’ Fantasy value is directly tied to the absence of Lewis, who will return from his league suspension November 16. For now, Barnes is knocking out some solid Fantasy lines, but the party figures to end for both he and Ryan Anderson when Lewis makes it back onto the court. Either Barnes or Anderson makes a nice filler for the back end of your roster this week, but be ready to cut bait (or sell high) on both these players come the end of next week.

Taj Gibson, Chicago Bulls: With Thomas out of the lineup for 4-to-6 weeks with a broken arm, Gibson becomes the undisputed starter at power forward for the Bulls. Don’t look for big-time blocks or steals (a la Thomas) from Gibson, but the rookie should be a decent source of points and rebounds as long as he’s playing starter’s minutes. Gibson is worth adding in deeper leagues right away, and all Fantasy managers should have him on their radar screens in case he has a breakout game.

Larry Hughes, New York Knicks: Hughes will remain in the Knicks’ starting lineup for the immediate future, at least according to head coach Mike D’Antoni. Hughes has stepped into the void created by the absence of Robinson, who’s expected to miss up to two weeks with a sprained ankle, but the veteran should retain some Fantasy value even after little Nate returns. Hughes can be inconsistent, but he should be good for at least a dozen points per night.

Corey Brewer, Minnesota Timberwolves: Brewer has quietly (which is the way basketball-related things happen in Minnesota) cobbled together a pretty decent stat line over the first six games of the 2009-10 campaign (12.8/4.8/2.8). His 6’9″ frame creates match-up problems aplenty in the backcourt, and he has cashed in by averaging over two steals and one block per game. Brewer should not be available in leagues with more than 12 teams, and some mid-size league managers should take a hard look at the one-time hot prospect that finally seems to be delivering on that promise.

Randy Foye, Washington Wizards: Mike Miller looks to be out for at least another week, and while he’s gone Foye should be in line for increased minutes. Nick Young is the starter at the two for now, but Foye’s ability to score the ball makes him a much more palatable Fantasy option. Add Foye if you’re in a deep league and in need of points, assists and threes, but his role as a reserve makes him not yet ready for widespread Fantasy relevance.

Dahntay Jones, Indiana Pacers: Jones has outperformed former starter Brandon Rush this season, and earned his first start of the season November 4. Thirty-eight minutes, 19 points and 12 rebounds later, a change could be in the offing in Indy. Jones does not have Rush’s outside shot (only 44 treys in 329 lifetime games), but appears to have found a home in the Pacer offense. Don’t over-invest in Jones, but he makes a fine short-term pickup in larger leagues – especially while Murphy is on the mend.

Beno Udrih, Sacramento Kings: Udrih was thoroughly underwhelming as the Kings’ starting point guard last season, but the injury to K-Mart means a chance at redemption. Former starting point guard Tyreke Evans will likely slide over to Martin’s two-guard spot, with Udrih once again manning the point. Don’t set the bar too high – this is Beno Udrih, after all – but he could be a serviceable Fantasy option for those managers in dire need of backcourt help.

J.J. Redick, Orlando Magic: A quick word on Redick, who has been a popular waiver target this week: His numbers have been solid, but his value is directly tied to the absence of Carter. Once Vinsanity returns (and that looks like it could be very soon), Redick’s minutes will plummet. Proceed with caution and be prepared to cut bait.

By Buck Davidson
This entry was posted on Sunday, November 8th, 2009 at 5:53 pm and is filed under BASKETBALL, Buck Davidson, The Wire Troll. You can follow any responses to this entry through the RSS 2.0 feed. You can leave a response, or trackback from your own site.