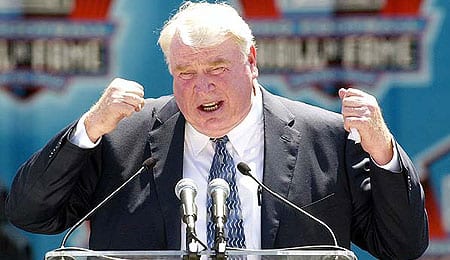 John Madden once said that winning is a great deodorant. Fans bathe in it.

On Thursday, I estimated I had roughly five congratulations in me towards Yankees fans. I work around them all day, teach them, and call some of them friend. Nonetheless, I’m rationing out the kudos like it’s a small supply of Ramen noodles on a deserted island. In fact, I only dished out two. Somehow, I don’t think the other three are leaving my mouth anytime soon.

One of the reasons for my anger is the multi-layered facade of Yankee fans and fans of the Dallas Cowboys. Individuals use their team preferences as a bully pulpit to make themselves feel better about their otherwise somewhat questionable lives. Can you blame them, though? As John Madden once said, winning is a great deodorant. Fans bathe in it.

Tired of waiting around for the local team to win or to spite their dad or to look cool for the girls in high school, we have become a nation of front runners. If you read TMW from two weeks ago, you know that I’ve crafted a plan to eliminate such nonsense.

In honour of the Eagles playing the Cowboys this weekend, it’s time to call into question perhaps the biggest set of frontrunning fans that don’t sport the interlocking NY on top of their heads.

I’m willing to bet most Cowboy fans under the age of 30 can’t answer 60 per cent of these questions accurately without checking out Wikipedia.

Without further ado, let’s fire up a sample of the first ever TMW Fan Certification Test:

1 . Which of these future NFL head coaches never played for the Dallas Cowboys?

2. What player said that Terry Bradshaw could not spell cat if you spotted him the c and the t?

3. How many times has Dallas appeared in the Super Bowl?

4. The only player in NFL history to win a Super Bowl MVP as a member of the losing team is:

5. Dallas lost three straight NFC title games during the 1980-82 seasons. Who was the starting quarterback for the Cowboys in all three?

6. The first time the Cowboys reached the playoffs in the Jimmy Johnson era was 1991. Who started the team’s playoff game at Chicago for the injured Troy Aikman?

7. Who scored the go-ahead touchdown in the famous Ice Bowl?

8. Dallas acquired what Pro Bowl defensive end from the San Francisco 49ers prior to the start of the ’92 season?

9. In Super Bowl XII, Robert Newhouse fired a touchdown pass on a halfback option to which receiver:

10. On its way to Super Bowl X against the Pittsburgh Steelers, Dallas defeated Minnesota in the divisional round. Which player caught a Hail Mary for the go-ahead touchdown?

See answers at bottom of column.

1. Detroit Lions, 1-6 (8): Detroit showed some limited promise this season, but then the Rams came into town and showed otherwise. A bad loss for the Lions.

5. Tennessee Titans, 1-6 (2): Finally, there is life. I’m not sure Vince Young is the answer at quarterback, but with Chris Johnson running the ball it doesn’t matter at the moment.

6. Oakland Raiders, 2-5 (6): At least they played well against the Chargers this season.

1. The Owen Daniels injury is going to slow the Texan passing game: Destined for a Pro Bowl this season, Daniels went down with a season-ending torn ACL injury. The timing could not be worse for the Texans. Quarterback Matt Schaub is playing the best football of his career while the team plays a huge game against the Colts on Sunday.

2. Perhaps the Giant defense just isn’t that good: Over their last three games, the Giants have surrendered 112 points, allowing 37 points per game over the same stretch. That’s what happens when C.C. Brown is covering people.

3. Percy Harvin is secretly one of the NFL’s most valuable players in 2009: Anytime the Vikings are reeling this season, Harvin finds a way to dig them out of trouble. The rookie from Florida leads the league in yards per touch at 19.8.

4. DeAngelo Williams and Jonathan Stewart pack a mean punch, as long as Jake Delhomme isn’t killing them: If Delhomme doesn’t turn the ball over, it makes things far easier for Williams and Stewart. Over the last three weeks, the Panthers have rushed for at least 250 yards twice.

5. The Jets = overrated: The bandwagon started to fill up after the Week Two win over New England. However, the Jets’ fourth loss in the last fifth games has made the bandwagon quite a bit lighter. New York’s special teams turned Ted Ginn into a combination of Dante Hall and Devin Hester. How else do you explain the Dolphins scoring 30 points despite gaining just 104 yards?

6. Steve Slaton is killing your Fantasy team one week at a time: Benched by Texan head coach Gary Kubiak last week in Buffalo, Slaton appears to be in great danger of losing playing time to backup Ryan Moats. Slaton has lost five fumbles and is averaging 3.1 yards per carry. Sounds like a benching to me.

7. Anquan Boldin may never actually get his money: Boldin did not pose as a model teammate over the past year in part due to a lack of financial security. Now, Arizona’s star receiver has been unable to stay healthy for much of the season. After being hounded by a hamstring ailment, he is now battling ankle problems.

8. Part 1 of Operation 2006 has begun: Whenever you have a quarterback on the wrong side of 30, it is not a good thing in the long run. Arizona and Tennessee got away with it 2008. At least for Tennessee, the story turned differently this season as Vince Young finally made his way into the starting lineup. With the Cards in first, Kurt Warner is not in danger in Arizona…as long as he stops having those five-interception performances.

9. Don’t look now, but outside of Minnesota and New Orleans the NFC is a mess: Eliminate Detroit, St. Louis and Tampa Bay. What else do we know about the NFC? Everyone else hovers between two and five wins. Looks like December should be a mess for tiebreakers.

1. Adrian Peterson (1): It seems like the Vikings run at least 50 plays per game inside of the 10 yard line, making it all the more easier for Peterson to score.

3. Drew Brees (3): He doesn’t have many tough matchups left on the schedule, but a big battle versus New England in the Superdome looms in a few weeks.

5. Cedric Benson (4): The Ravens will keep Benson under 100 yards rushing on Sunday. Take it to the bank.

6. Ronnie Brown (5): He will a key figure in Sunday’s matchup against New England.

7. Ray Rice (6): The Bengal defense should be a bit softer this time around without Antwan Odom.

8. Tom Brady (10): His productivity this week will be tied to his defense’s ability to get the Dolphins off the field.

9. Andre Johnson (5): The Colts have only allowed three touchdown passes thus far. Johnson could have a good day though against an injury-depleted secondary.

10. Maurice Jones-Drew (7): Too bad he was outdone by Johnson…Chris and Gus.

It’s one thing to lose a World Series. Losing a World Series to the Yankees hits another stratosphere of misery. It’s time to drown my sorrows in a sad song…and football.

If you’ve answered between eight and 10 correctly, you’re in great shape and more than likely over 30 years old.

Don’t worry, Cowboy fans. Your fans aren’t the only ones with frauds placed within…and yes, I’m looking at you, Steeler Nation.

By Derek Jones
This entry was posted on Saturday, November 7th, 2009 at 6:22 pm and is filed under Derek Jones, FOOTBALL, Two Minute Warning. You can follow any responses to this entry through the RSS 2.0 feed. You can skip to the end and leave a response. Pinging is currently not allowed.