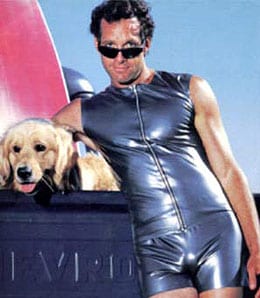 This could be the most disturbing photo we’ve ever run.

I’m declaring open season on all fraudulent fans — and, as they say on the streets, let’s not get it twisted. I love my Phillie fan brethren, but there are numerous frauds infiltrating Phillies-fandom.

In the aftermath of Philly’s World Series win in 2008, Citizens Bank Park became a party zone. Parking lots, which already featured copious amounts of tailgaters, turned into a full-fledged party on a nightly basis, typically filled with 20-somethings and seemingly underage college students getting their crack at partying up.

Games of beer pong and cornhole ran rampant throughout the stadium area; and yes, even people doing whip-its, which is the inhalation of nitrous fumes from a balloon. Not sure who these fans are? You’ll get a look at them in the Video of the Week down below.

Following Philadelphia’s 10-4 win Wednesday night over the Dodgers to clinch the National League pennant for the second straight year, I made my way through the traffic at Citizens Bank Park to see fans celebrating, vendors selling offensive T-shirts about New York and the usual fare one comes to expect with a big win.

Yet, those fans were smashing beer bottles and yelling things that I don’t even feel comfortable saying to my friends. These are the same people who will readily get smashed before each and every remaining Phillie game and subsequently end up face down on the pavement after being arrested by Philadelphia’s finest. It’s the fake ones that ruin it sometimes for the real ones.

In my opinion, some of this behaviour stems from a self-esteem issue. Everyone wants to be associated with a winner. No one wants to go to school or hang out with friends and be laughed at because they are wearing a Kansas City Royals or Detroit Lions cap.

The lazy way out is the easy way out. Having Kobe Bryant or Peyton Manning do your bidding on the field is easier than rooting for Joe Johnson or David Garrard.

However, I’d like to create a breed and society of fan to put a stop to such chicanery. Simply stated, we need fan permits. The time to start calling out the phony fan is here.

In my own Utopia, in order to attend any game, fans must be certified to do so by scoring 80 per cent on a questionnaire about the team’s history. (Think of that classic scene from Diner when Steve Guttenberg’s character makes his girlfriend pass a quiz about the Baltimore Colts before he’ll marry her.)

My first fan base under attack is the Dallas Cowboys. Thanks to its storied and infamous history, few fan bases feature as many rabid frontrunners as this rambunctious gang. Amazingly though, most of its 20-something fans believe the franchise began in 1992.

Enough is enough. Next week, TMW will unveil the first ever Fan Certification Test. Cowboy fans, get ready.

A tribute to the NFL’s bottom feeders…

1. St. Louis Rams (0-6): They put together a much better effort versus Jacksonville, but are still wildly undermanned.

2. Tennessee Titans (0-6): How awful are the Titans? They put forth such a dreadful performance that Jeff Fisher wore a Peyton Manning jersey at a charity event.

4. Kansas City Chiefs (1-5): They have a very slow secondary, but are willing to fight for Todd Haley.

6. Oakland Raiders (2-4): Someone nudged JaMarcus Russell and the Raiders. Although, they got a big assist from the Eagles (more on that later).

7. Tampa Bay Buccaneers (0-6): Carolina took the ball out of Jake Delhomme’s hand during the game’s biggest drive and thus, took away Tampa’s chance to win.

9. Buffalo Bills (2-4): The Dick Jauron era is dragged out at least another week.

10. Carolina Panthers (2-3): Incredibly, the Panthers are one win away from being .500. Playing other bad teams does the schedule good.

1. The Tennessee Titans are far worse than anyone ever imagined: New England humiliated the Titans 59-0 last Sunday. NFL teams should never lose that badly. Even the 0-16 Lions didn’t lose that badly. Ironically, Detroit’s largest margin of defeat was a 37-point loss to Tennessee on Thanksgiving Day. The pass defense is the most alarming issue in the Music City. Tom Brady threw six touchdown passes and an NFL record five in the second quarter. Overall, opposing quarterbacks have a composite passer rating of 117.5. Unacceptable.

2. Don’t throw dirt on Laurence Maroney’s career quite yet: As a part of the Titans’ burial last Sunday, Maroney ran 16 times for 123 yards. The bigger news may be the injury to Sammy Morris, which may keep him sidelined for several weeks. Adjust your Fantasy rosters accordingly.

3. The Eagles are their own worst enemy: Facing one of the worst rush defenses in the league, Andy Reid dialed up 52 dropbacks and just 14 rushing attempts in a 13-9 loss. Already sporting a creaky offensive line, Donovan McNabb was sacked six times. Doesn’t this ring a bell? Last year versus another porous team, the Cincinnati Bengals, Philly attempted 58 passes to just 18 runs in a tie with the Bungles.

4. You probably don’t know that the third-ranked player in Fantasy football is from Rutgers: Believe it or not, after another strong performance, Ray Rice is third in standard Fantasy scoring, trailing Adrian Peterson and Maurice Jones-Drew.

5. Green Bay does not specialize in pass protection: Despite the Pack shutting out the Lions on Sunday, Aaron Rodgers is still taking a beating. He was sacked five more times. The Packers have allowed an NFL-worst 25 sacks.

6. Speaking of which, protecting your quarterback goes a long way: The Colts, Falcons, Giants and Saints rank one through four, respectively, at protecting the quarterback. Their combined record is 19-2.

7. The Saints are the best team in football that doesn’t have Peyton Manning: While the Saints are 5-0, I’m not a believer. The Colts have the best player in the NFL and a decent defense, which to me, makes them the most formidable at the moment.

8. Anquan Boldin is snake-bitten or injury-prone. Take your pick: Boldin has played all 16 games only twice in his seven-year career. He has been banged up early and often in ’09 and it’s showing. He owns just one touchdown reception this season.

9. Someone needs to tell the NFL Network that games with good fourth quarters did not come about in 2000: The NFL Network trotted out a new series called “Greatest 4th Quarters.” Unfortunately, they keep trotting out games from this decade. It’s okay to use the ’80s and ’90s, gang.

1. Adrian Peterson (1): He made mincemeat out of the Raven defense.

2. Peyton Manning (2): I have a feeling we’ll see Jim Sorgi at some point this week versus the Rams.

3. Drew Brees (6): He exposed the Giants’ number one ranked defense with his usual precision passing.

4. Ronnie Brown (3): The Dolphins line up against the Saints. How often do you think we’ll see the Wildcat to keep New Orleans off the field?

7. Maurice Jones-Drew (7): MJD is the only enjoyable thing about Jaguar football in 2009.

9. Reggie Wayne (4): Should be in line for a touchdown versus the Rams in Week Seven.

As mentioned at the jump, Phillie fans these days are a bit on the out of control side. Check out this video which features a fan getting hit with fireworks and another having bottles thrown at him. So much for keeping these fans from climbing on things.

By Derek Jones
Tags: New York Yankees, Philadelphia Phillies, Steve Guttenberg
This entry was posted on Saturday, October 24th, 2009 at 9:01 pm and is filed under Derek Jones, FOOTBALL, Two Minute Warning. You can follow any responses to this entry through the RSS 2.0 feed. Both comments and pings are currently closed.