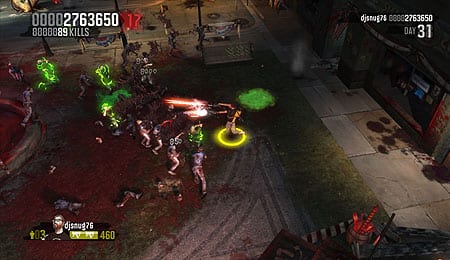 If video games have proven anything over the past year or so, it’s that people love killing that which is already dead. In fact, pretty much every week you’ll find Left 4 Dead and Call of Duty: World at War (with its highly popular Nazi Zombies mode) among the top 10 games played on Xbox Live. Even Halo 3 offers a “Living Dead” playlist where gamers become infected when killed. Well, we can now add the recently released Zombie Apocalypse to the list, as the arcade title puts you on the screen with hundreds of zombies on every level and challenges you to wipe them out — all of them.

The most logical comparison in terms of controls would be Smash T.V., as you’ll use the left stick to move while the right stick aims and fires your weapon. It’s a simple mechanic that takes virtually no time to get used to, and considering the number of rounds you’ll be firing on each level it was a decision that trigger fingers across the country will be grateful for.

Beyond that, the right and left triggers cause your character to wield their chainsaw for close quarters combat. The right trigger is the basic attack, whereas the left trigger is used to dismember zombies. It’s a cooler looking attack and is the quickest way to build up your scoring multiplier, but it’s slow and can’t be used in a crowd or once you’re done slicing and dicing you’ll be zombie food. That makes using the left trigger a risk/reward situation.

By pressing either bumper you will toss an explosive-laden teddy bear, which the zombies are attracted to and will crowd around. The face buttons are not used at all. My only problem with the controls related to aiming my gun, as it seemed there were times enemies would reach me unscathed despite traveling directly through a hail of gunfire. Overall though, everything functions well.

The graphics in Zombie Apocalypse are fairly good as the game gives you seven different stages from which to vanquish the undead. They’re all unique and visually pleasing, particularly the carnival, and each map presents numerous hazards to force the zombies into quicker (and often more satisfying) deaths. You’ll see a good mix of guns represented, and the explosions/fires stemming from their use is also well done (get it? Fire. Well done?).

Each area will be populated by an ever growing horde of zombies, and as you progress you’ll encounter a larger variety of bullet sponges. As standalones they look pretty solid, but as the screen continues to fill and enemies blend into the background, it becomes difficult at times to distinguish which zombie type is pursuing you — an issue that becomes exacerbated when everything turns green from radioactivity. That can be a big problem since several enemies bring one-hit kill capabilities to the dance. It’s at its worst when the knife-throwing grannies are prevalent since it becomes really hard at times to see their projectiles approaching. I understand this is a zombie game, which suggests a dark atmosphere, but I would’ve preferred a little more contrast between the enemies and backgrounds.

Zombie Apocalypse does what it needs to do in the audio department and not much else. All the requisite moans and groans are there for the zombies, along with a melancholy score, but there are no standout moments. Each of the four selectable characters spout a few unique lines of text, primarily when you clear a level, but you’ll have tired of their quips by the time you finish the game. The various guns and explosions are all rock solid.

There is no story to speak of in Zombie Apocalypse as you just move from one level to the next disposing of the living dead. There are four character options to choose from, but they all have access to the same weapons and have no unique abilities or traits (i.e., more strength or speed).

The main game begins with you fighting basic zombies in a graveyard and goes from there. As you progress, you’ll be introduced to a virtual cornucopia of undead adversaries. There are big ones, shifty ones, ones that puke and even ones that tote shotguns. There’s actually a good variety of enemies to deal with, but that’s not nearly enough to keep the experience fresh over the entire 55-day campaign. In fact, Zombie Apocalypse uses a lot of repackaging during the course of the game, such as turning all the zombies radioactive about midway through so they can take more damage.

You’ll also come across some levels where you’ll only be allowed access to your chainsaw or where all the lights have been turned off. These do help to mix things up a bit, but when you’re seeing the same locales seven or eight times and fending off different combinations of the same enemies, you’ll be hit with an undeniable sense of déjà vu.

Thankfully, outside of a few of the later levels that seemed overly cheap, the core game play is generally a blast. You see, the zombies aren’t the only ones getting stronger, as you’ll continue to be provided with an ever-improving arsenal to use at your disposal. Most of your new toys are great fun to use, and the first time I picked up the Gatling gun and just started mowing down zombies, it was among the more satisfying gaming experiences I’ve had in recent memory.

As you play through the main game you’ll unlock other modes. One allows you to play all the levels without lights (blackout) while another gives you access to all the weapons with unlimited ammo, which is good for those times you want to kill zombies with extreme prejudice. The star of the added modes is “7 Days in Hell,” which cranks the undead mayhem up to 11 while slapping a sepia filter on the action to give things a grainy, retro look.

Zombie Apocalypse can be played solo, but it’s a more engaging experience when played with other people. The game supports up to four players through either local or online multiplayer, and I generally had no trouble finding a match. Once connected, the game ran smoothly, though like any online offering, things vary greatly based on your teammates.

While Zombie Apocalypse could’ve benefitted from more variety, it still brings a lot of fun and replay value to the table for a more than palatable 800-point price tag ($10).

By HC Green
Tags: Video Game Reviews
This entry was posted on Monday, October 12th, 2009 at 11:36 am and is filed under Herija Green, Video Game Reviews. You can follow any responses to this entry through the RSS 2.0 feed. Both comments and pings are currently closed.