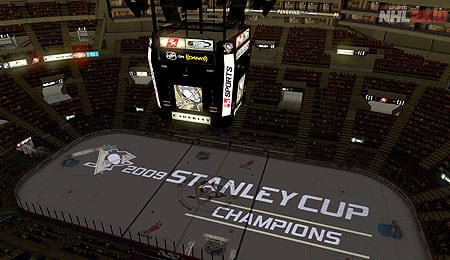 The detailed arenas is one area where 2k10 really shines.

The calendar turning to October can mean only one thing — well, technically it can mean a lot of things, but the only one of importance for hockey fans is the arrival of another NHL season, and with that comes a new installment of 2kSports’ NHL 2k10. This year, 2kSports looked to tailor its product to appeal to both casual gamers and dedicated puck fans alike with mixed results. NHL 2k10 feels a little too complex for the “pick-up-and-play” vibe it was shooting for, but improved A.I. and the option to customize the experience make this a potentially overlooked option for more serious gamers.

While I wouldn’t classify controlling the players in NHL 2k10 as difficult, I would say that it often feels more complex than it needs to be, particularly defensively. Yes, you still skate with the left stick, make moves and shoot with the right and engage turbo with the right trigger. However, there have been some questionable decisions made to button mapping when you’re trying to stop your opponent.

First of all, the right stick (such a huge staple of the other 2k sports titles and in the offensive portion of this game) is hardly used. In fact, all the right stick does for you on defense is to sweep your hockey stick around in hopes of deflecting a pass. In the standard setup, checking is assigned to the B button, while shot blocking and poke checking are executed with the right and left bumpers, respectively. You can do a stick lift with the Y button, but if you hold down both triggers while hitting Y you’ll do a diving poke check, which is exactly the type of thing I don’t understand. Why would the right bumper do a standard poke check when three completely different buttons pull off the diving version?

Like I said, it isn’t hard to control, rather it feels counterintuitive. It is worth pointing out there are three different controller setups available, though there’s no option to re-map on your own, and the right stick is nearly non-existent defensively in all three.

Things go more smoothly when you’ve got the puck with dekes, one-on-one moves and drop passes all easily pulled off. My only complaint is there are times I find my player doing fancy puck handling or faking shots instead of unleashing a slap shot at the goalie because it didn’t read my up/down motion with the stick or I’m still in the middle of the deke animation. On the positive side, NHL 2k10 has the best faceoff interface I’ve ever seen. It takes time to learn and gives you more options than past games. In fact, you can even get removed from the faceoff circle if you jump the gun too often, which is a great touch that prevents you from jamming on the buttons and makes it more about timing.

Visually, NHL 2k10 establishes a new high water mark for the series. The arenas look tremendous, and the game really flexes its graphical muscle during the pre-game introductions. The player uniforms are extremely detailed, the players themselves look good, and yes, playoff beards are included. When in action, they move fluidly as players skate, pass and slam into one another on the ice. Therein lies one of my favourite subtle touches as player collisions in NHL 2k10 aren’t limited to opponents, which makes you think twice about flying around the ice jamming on the B button — if you go that route, be prepared to crash into teammates and open up space for your opponent.

Adding to the impressive visuals is that even with 12 players, referees, a full bench and an active crowd all in motion at the same time, NHL 2k10 cruises along without any noticeable hitches in the frame rate whether you’re playing from the disc or hard drive.

There are some odd visuals to be found, however, specifically how the puck seems to be glued to players’ sticks at times. When playing the game at full speed it will usually just register as being a little off visually (like watching a player take too many steps in basketball, you just know something’s amiss), but if you slow down the replays you’ll watch players fake shots where the puck does all sorts of unnatural things to stay in their possession. You’ll also have times where you light someone up in open ice, sending them sprawling…but they magically retain the puck. So while it’s usually exclusively a visual issue, it can occasionally affect the actual game.

The audio department is generally good with solid, if a little overly reserved commentary and a top-notch soundtrack. My main gripe comes from the sound effects on the ice, where some things seem just a little over the top, like the booming slap shot. In that same vein, I found it odd that in-game goal replays remove all ambient sound with the exception of the puck. There’s nothing here that detracts from the overall experience, but some subtle tweaks could really shore things up.

No matter how good a game looks, if the game play isn’t up to par there’s going to be little reason to log many hours on it. To that end, NHL 2k10 offers a rewarding experience to those that are willing to invest some time. Unfortunately, gamers that want to dive in and play may be turned off by the speed of the game, not to mention the number of goals and penalties that permeate the default skill levels.

Two areas that feel off on those default settings relate to speed. First, the skating just seems too slow unless you’re holding down the turbo button. Some dislike the concept of turbo boosts in sports titles, but I’ve never felt they should be removed. Instead, I feel they should only be available sparingly to really blow past an opponent or chase down a loose puck. Instead, you can pretty much keep the button held down and easily skate the length of the ice without slowing down. In fact, you’ll rarely find a reason to remove your trigger finger during standard game play.

The second area is in the speed of your shots, which seem to travel incredibly fast no matter what type of shot you’re unleashing. Backhands and wrist shots look just like a Zdeno Chara skills competition slap shot, and it leads to a ton of “soft” goals.

Not helping matters either is the incredible number of penalties you’ll encounter. I can’t tell you how many 5-on-3s I had to deal with, and it’s not because I was playing out of control. Instead, it was my CPU teammates getting dinged for every possible infraction. You almost can’t help but laugh when you see Jarome Iginla skate out of the penalty box and get called for roughing less than 10 seconds later.

Now, while all that may sound like a lot to overcome, NHL 2k10 comes complete with a ton of sliders to create a much more realistic experience. In fact, pretty much any area you find unrealistic can be fixed through trial and error. If that sounds like too much work to you don’t despair. NHL 2k10 allows users to upload their sliders, so you can allow others to do the heavy lifting for you. Most on the 2k boards swear by VeNOM’s sliders for a realistic experience and with good reason. His work does a fantastic job of turning the default weaknesses into strengths, and those searching for a simulation experience owe it to themselves to at least give it a shot.

Even with the social gaming angle, NHL 2k10 is still built around the franchise mode. Working as both the coach and GM, you’ll perform all the usual tasks like signing free agents, engineering trades and working the waiver wire while keeping an eye on your team’s budget. You’ll be operating with full NHL and AHL rosters for your team, dressing/scratching who you’d like to play, editing lines and customizing your club’s strategy. However, there’s no scouting of the upcoming draft to be found and no coaches or staff to be hired/fired, which is a disappointing omission considering that dynamic player progression is a nice addition to franchise mode. It would’ve been nice to have the option to hire a coaching staff that accelerates improvement for a younger club, or another that helps maintain performance for a more veteran club. That isn’t the case here.

Another worthy addition to the franchise mode is the ability to play any game during the year against a human-controlled opponent on- or offline. If you’ve got friends playing the game it’s a good way to freshen things up a bit rather than always facing off against the CPU. NHL 2k10 also offers the ability to upload box scores, screen shots and clips (including ones you customize via 2kReels) to an online blog for your franchise. So, in theory, you could create custom highlights from each game, upload them along with the box score and write a game story. I experimented with it a bit, and I have to admit I enjoyed it, even if no one will ever read my fictitious game summaries.

For those that were wondering, the CPU does a yeoman’s job in stat simulation during franchise mode with players tallying reasonable point and goal totals for the season. You’ll also see a realistic split for games played by goalies.

Shifting online you’ll be able to join online 2k leagues or play a Team Up game where you control a single player with up to 11 other human players. It performed fairly smoothly once I got into a game, but on more than one occasion I was unable to connect to the 2k servers and also encountered freezing while browsing through online file sharing. Also in the negative ledger, ranked online matches don’t allow custom sliders. This means most games devolve into goal-scoring fests with minimally effective goalkeeping from the CPU.

Other things worth noting include the overall presentation receiving a face lift with a new Wii-inspired menu system, making things more user friendly to navigate. Conversely, the secondary modes return largely unchanged with Zamboni racing (available during intermissions or as a standalone), pond hockey (an outdoor pick-up game), tournaments and exhibition games all present. One nice addition to exhibition games is the ability to play the Winter Classic, including the option to select the uniforms the four participating clubs wore during those tilts.

What’s odd about NHL 2k10 is that it’s self-described focus was on creating a social gaming experience, but it saddled itself with needlessly complex controls and some of the harshest referees ever seen in a video game on the default settings. Instead, NHL 2k10 ends up being more appealing to seasoned gamers and puck enthusiasts who, with the aid of some downloadable sliders, may find a surprisingly realistic brand of hockey waiting for them.

By Herija Green
Tags: NHL
This entry was posted on Friday, October 9th, 2009 at 5:21 pm and is filed under Herija Green, HOCKEY, Video Game Reviews. You can follow any responses to this entry through the RSS 2.0 feed. Both comments and pings are currently closed.