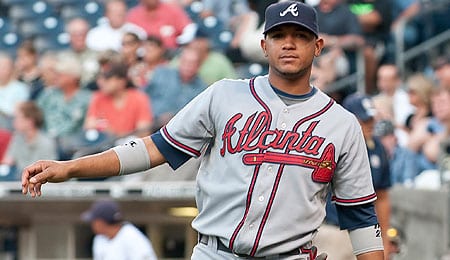 Diory Hernandez’s ceiling in the majors appears to be quite limited.

After seven minor league seasons, we finally got a chance to see what shortstop Diory Hernandez can do in the majors, and apparently it’s not much.

Signed out of the Dominican Republic by the Braves in 2002, Hernandez got the call to Atlanta in late-May when Omar Infante landed on the DL. At the time, Hernandez was hitting the cover off the ball at Triple-A, batting .355.

Well, he got almost three months to prove he belonged on a big-league bench, but in 85 at-bats, he recorded an abysmal 410 OPS, struck out way too often and failed to show any of the speed that is supposedly his main strength – although he’s been a notoriously poor basestealer (63-for-116) over his minor league career. In mid-August, he was mercifully sent back down once Infante came off the DL.

Hernandez has a hell of a glove, so at the very least he’s got a chance to be a utility infielder who could pinch-run on occasion. And I’m not totally ready to write off a player who’s only 25, hit .319 in his second try at Triple-A and had an unbelievable playoff for Gwinnett, batting .400.

But I fear that Hernandez’s lack of patience will limit his ceiling to be a back-up infielder at best.

By RotoRob
This entry was posted on Sunday, October 4th, 2009 at 11:57 pm and is filed under BASEBALL, Fantasy Notes, RotoRob. You can follow any responses to this entry through the RSS 2.0 feed. You can skip to the end and leave a response. Pinging is currently not allowed.